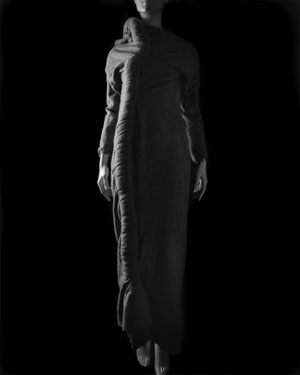 A lot of what photographer Hiroshi Sugimoto does ought to be really annoying. He’s famous for making very large photographs of things that might seem hardly worth photographing: museum dioramas, celebrity waxworks, empty movie theaters, expanses of the calm ocean. Through what alchemy does he make these depictions of depictions and chronicles of blankness seem worth looking at, even enchanting?

That same magic is on display in two shows at San Francisco’s Asian Art Museum, both masterminded by the Japanese-American photographer himself.

History of History, a traveling exhibition that has already appeared in New York, Washington, and Toronto, combines objects from Sugimoto’s personal collection—including prehistoric fossils, fragments of ancient Japanese textiles, antique scrolls, and miscellaneous collectibles—with his own photographs and conceptual pieces in a way that blurs the distinction between curator and installation artist.

It would be easy enough to see History of History as an exercise in the ego, for he’s not only showing off his museum-quality possessions but also including his own work (a photograph of a waterfall here, another of a waxed effigy there) among these timeless treasures. Indeed, to create “Time’s Arrow,” the piece that appears on the cover of the show’s catalogue, Sugimoto took a fragment of a 13th-century bronze reliquary and placed one of his own seascape photographs inside the frame originally made to hold a sacred relic of the Buddha. 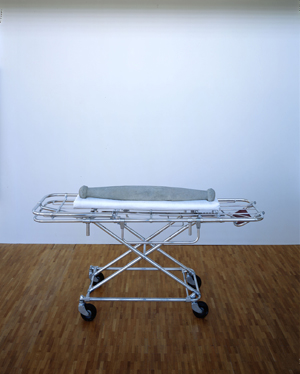 In the hands of another artist, a show like History could easily come across as a self-glorifying antique shoppe, Stylized Sculpture as the trend-hound fashion boutique next door. But Sugimoto manages to imbue both installations with a humility that underscores, not the artist’s distance from the unglamorous lives of the rest of us, but our shared experience of time, loss, and the consolations of wonder.

Some Conceptual and Minimalist work leans toward holier-than-thou asceticism or a kind of angry contempt for people who still want art to put on a show for the eye and heart as well as the mind. But Sugimoto’s photography, austere though it is, is more seductive than challenging; he seems to want to lure us down his latest conceptual path rather than shock and awe us with what he has found there. One reason, perhaps, is that he takes as his subjects things we all like to look at—famous people, famous buildings, movie screens, the ocean—but uses them to investigate mortality, impermanence, and other ideas that our day-to-day mind-set shies away from.

In History of History Sugimoto uses his collecting to explore his photography’s philosophical underpinnings. He introduces a display of fossils by describing them as “prehistoric photography” because of the way they preserve the past. Arrays of little squares of ancient Japanese fabrics evoke modernist collage and also the endless labors, esthetic and otherwise, of all the generations who’ve preceded us.

Religious artifacts—a 12th-century carving of a graceful Shinto deity, a 15th-century Buddhist painting of a symbol-laden white deer, a stone phallus dating from one or two millennia earlier—are accompanied by a text on Japanese religious history that encourages us to reflect on how humans’ eternal truths are continually rewritten, along with the rest of our ever-shifting history.

Stylized Sculpture, meanwhile, its mannequins adorned in amazing high-tech ruffles and brutalist draperies, speaks to the same point, for what is more eternal and more evanescent than fashion? And Sugimoto’s photos of these clothes, placed alongside the things themselves, call to mind his natural history diorama series, his soft-focus depictions of architectural landmarks, and the fantastical aspect of even the most quotidian documentary photograph.

Unique to the San Francisco edition of History of History is a set of seven hanging scrolls, fragments from an eighth-century Flower Ornament Sutra. Deep blue and covered with delicate calligraphy in shiny silver ink, the fragments have a wavy brownish-red border of singe marks, evidence of the scroll’s miraculous survival of a 1667 fire that destroyed the temple hall where it was housed. Sugimoto has arrayed the “burnt sutra” on a series of silk banners, each dyed a slightly different blue-green, to create an installation that looks like a gorgeous piece of contemporary art but is also a monument to the randomness of survival, to both the nobility and folly of human endeavor.

History of History confronts us with the dead weight of infinity while offering the solace of philosophy, of art, of our mind’s ability to find some kind of meaning, however impermanent, in our dilemma. In this context the seascape Sugimoto inserted into the Buddhist reliquary—blank white sky above, smooth dark water below—seems the opposite of egotistic. It points to a yin and yang of human limitation and aspiration, to the comfort we can take in recognizing how little any of us, including the artist himself, matters amid the vastness in which we find ourselves.

Eschewing the criticality of the minimalist sculpture around him in the late ’60s and early ’70s, Jack Whitten, primarily known as a painter, embarked on a course of aesthetic discovery aimed at producing sculpture that radiated the energy of collective memory and reflected the power of various individuals, living and dead, to whom he chose to pay tribute through his work.