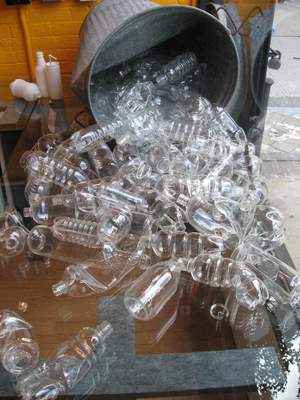 Greenjeans, a small craft shop slowly morphing into a makeshift gallery in Brooklyn’s South Slope, is becoming a destination for new American craft. Their latest show, Garbage Collection, is their first foray into a gallery-like exhibition. It is the latest attempt to reconstitute the tried and true world of American craft with a modern feel and repackage it as part of a new wave that looks a lot like the traditional fine arts.

The exhibit features the work of Pittsburgh-based glass artist Matthew Eskuche, who makes realistic sculptures of post-consumer waste (including crushed cans, plastic bottles and drinking straws), and Brooklyn-based artist Anders Bergstrom, who creates linear drawings and prints of refuse. The show is accompanied by a short essay by NYU anthropologist Robin Nagle, who specializes in looking at things through the not-so-glamorous prism of garbage. Nagle’s text underlines the fact that garbage has its own meaning even though it is predominantly invisible to us most of the time.
Eskuche is the star of this small show. A talented glass blower, his delicate renditions of discarded objects, endows his bottle forms with a preciousness that’s hard to reconcile intellectually. Eskuche’s attention to detail is maddening. The plastic bottles, in particular, are perfectly reproduced and reveal themselves to be glass only when touched. Displayed like a cornucopia of trash, Eskuche’s “Damn Squirrels” (2007) is the largest piece in the show, composed of a carefully arranged jumble of transparent glass objects spilling out of a dented metal garbage can. Only its cutesy title injects a folksy, craft-like flavor to an otherwise art-like object—yes, I’m well aware that this statement reveals my own bias towards craft.

Some small details, like the tabs on soda cans, aren’t as realistic as, say, the ridges of the water bottles, but generally the simulacrum of trash is remarkably precise. The fact that we literally look through these transparent but precious objects is brilliantly ironic: these otherwise invisible things, rendered in an invisible material, have thus become the subject of our attention and objects of contemplation.

The other works in the show, including “Pop, Tink, Pffshh,” “Crink, Crsh” and “Beverly Hills” (all 2007) use smaller arrangements of glass components. The modest format of these works seems to allow the objects to breathe while effortlessly showcasing their exquisite elements.
Eskuche’s work cuts to the heart of the debate regarding craft, namely what the hell is it? According to Andrew Wagner, the new editor-in-chief of the revamped American Craft magazine, the term itself is unwieldy and difficult. “People are searching for freedom from the strict confines that have been hoisted upon so many creative endeavors,” he explains in an email interview, “At its essence, at its very root, craft is about process, technique and material.”

A few years back Metropolis magazine wrote about craft being a dirty word, and that institutions, like the California College of Arts and Crafts or the American Craft Museum, were lopping off the “craft” part of their names to refashion themselves into contemporary art institutions. This exodus from the label “craft” is understandable if you consider that no clear definition of craft exists and corporate entities, like museums, shy away from things that can’t be easily categorized and catalogued. In contrast, the term “art” (thanks to Duchamp and his acolytes) can be tacked onto anything no questions asked—maybe even onto craft.

Greenjeans’ co-owner Amy Shaw suggests her own definition, which she admits is the result of a long and continuing process of exploration about craft on her blog (greenjeansbrooklyn.blogspot.com), “And at the end of the day, there are only two defining characteristics that I can’t seem to argue against: 1) craft is the root of all made things; and 2) craft cannot be divorced from function (which doesn’t mean a work must be functional to be craft, but rather that any craft work is in some way dealing with function, whether by being functional or ‘queering’ function by subverting expectations).”

The other artist in the Greenjeans show, Anders Bergstrom, is an artist whose serialized imagery (mostly crushed cans and stacked newspapers) mimics the craft world’s love for reproduction. His drawings are filled with strong gestures and his prints are crisp and clean. Why Bergstrom is included is a little bit of a mystery, but he provides an appropriate art context for Eskuche’s queering of craft. He forces us to look at the objects he draws as removed from the worlds of art and craft, yet simultaneously part of both. There are other objects in the shop that are not included in the exhibition, and they unintentionally provide Bergstrom with a context for craft. Striking a third path is a delicate balance between the two forms that Eskuche has successfully navigated. His carefully considered entry into the world of art seems informed by his heritage in craft, but he is eager to forge ahead into a field that may simply not yet have a name.

On view at FiveMyles gallery in Brooklyn is a compelling three-person exhibition titled Hekate’s Grove. Featuring works by sculptor Elizabeth Insogna, painter Karen (Karsen) Heagle, and performance artist and folklorist Kay Turner, this show pays homage to the ancient Greek goddess Hekate, a rather obscure patron deity of witchcraft who is commonly associated with crossroads and entryways, and capable of both good and evil.