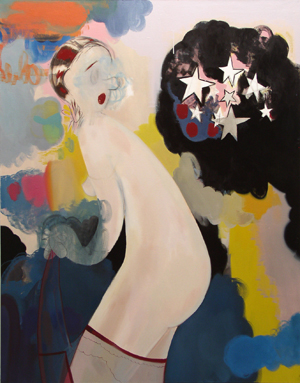 Great Loves, not truncated by death, are classically portrayed in three ways: 1) The pair winds up together (all of Jane Austen; Jane Eyre); 2) One lover tragically abandons the other (Madame Bovary, Anna Karenina); 3) The lovers remain, in equal parts, devoted to one another and to parallel passages that do not ultimately intersect; a separation that only serves to fuel their longing (Casablanca, Cathy and Heathcliff in Wuthering Heights).

Ellen Berkenblit’s work falls into this last category. Her elegant, weirdly engaging paintings are serial depictions of a female figure in varied, often riotous grounds that convey a distanced but binding romance between a figure and her surroundings. Tenable attraction rumbles between this character and the starry, boisterous skies and floating swatches of color that seem about to lap her up, or at least derail her: Yet Berkenblit’s heroine never is consumed by her environment. Rather, she responds with a composed, though slightly confused, often flirtatious excitement.

The artist, who says she often imagines the Europe her grandparents left, paints her character into made-up histories, evoking intriguingly dreamy notions of bygone great-city splendor: St. Petersburg, Prague, Paris, Vienna, boulevards, forests, homes with heavy drapes, gleaming porcelain dinner plates, tea sets, streets of locomotives, blowing white steam, horses, grand balls, duels. The character herself is a frothy brew of careful stylization and something close to goofiness. Her cartoon-like head is rendered in permanent profile (Betty Boop is what several viewers remarked at the opening), always facing left, often over her shoulder. Her face is a graphic blend of protrusions and orifices. The mouth and eyes (with pronounced lashes beneath dainty brows), are perfect circles, while her nose is rounded and jutting. Berkenblit often disorients the viewer by rendering details of the woman’s elegant clothing and adornments (they sometimes appear off center, in a low or high corner of the canvas) with careful, crisp detail, but her limbs, and especially hands, are blurred and hugely clumsy, better suited to a puffy stuffed animal than to the erect, graceful figure they are often attached to.

The background’s agitated brushstrokes and the frequent appearance of five-pointed stars, resembling flames bursting in the sky, suggest bombardments from an invasion or civil unrest. Something is threatening this world, yet the figure maintains a sense of self-containment. The character, formally dressed, as if on her way to an opera, the theater, a wedding, a tryst (or the promise of one), traverses various settings with an expression of wariness and hope but also with the clear determination of an explorer. She is never found in a domestic scene, but always outside, on the streets.

The very word, explorer, brings to mind men, boys, and ocean—faring ships; tundra, rivers, insulated boots, airplanes. But what does a physical expedition look like for a female character, especially one this elegant? Her journeys, which occur outside any identifiable dwelling, recall those monumental and brilliant women who roved. Consider Virginia Woolf. Her famous walks, or haunts, along the streets of London and through country fields conveyed a profound sense of absorption. She soaked up her surroundings to the point of merging with them. Then there is the wicked, perilous male-fantasy world of Marquis de Sade’s road. His poor, homeless Justine runs away from her orphanage in pursuit of freedom and goodness, only to be continually captured, punished and forced into ever-degrading servitude.

Berkenblit suggests a different course. Her character has a firm grip on separateness, yet she is not quite independent. She is by no means tragic. She has a quest, and it is this: to reach a point of suspended balance above her “self” as well as the time and space she finds herself in the midst of. Another way of saying it is that she is determined to be partly in the world and partly of it, but never one more than the other. The enforced distance between her figure and the phantom, unrequited lover generates a liberating equilibrium; it is a difficult, delicate pitch to reach, and helps account for the works’ sense of understated resolve.

The 83rd, Figure of Noise

While perhaps telling, The 83rd's coded use of “culture” is just as instructive as his near-militant posture of independence. As the founder of the multi-pronged media organization Sermon 3 Recordings, through which he self-releases his music via Bandcamp, The 83rd’s sui generis trajectory seeks the kind of valanced heat that the real and art worlds seem to so rarely offer to self-styled enfants terrible.