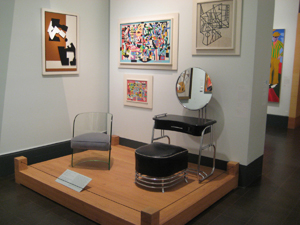 Installation view of Stuart Davis paintings at the Brooklyn Museum of Art, (Fall 2007).

As a twenty-five year local resident I can unashamedly admit it: I love the Brooklyn Museum of Art. Like the borough itself, it’s big, quirky, and, for the uninitiated, a bit odd. Try as I might, in the three years since the reinstallation of its prized American painting collection (unique in scope within the greater Metropolitan area), I can no longer remain silent. It’s now obvious that BMA’s decision to hang its masterpieces of the Hudson River School, the Ashcan School, and the Early Modernists, including the likes of O’Keeffe, Dove and an unparalleled selection of Hartleys, in interior “environments,” many behind period furniture like so many decorative chatchkas, is not a temporary, admirable mistake by “well intentioned” curators, experimenting with “new ideas.” It’s a disaster, a wooly-headed scheme that, either through good intentions or paternalistic condescension toward the “educational” interest of is constituents, could have been spawned only from an anti-painting agenda. (Exhibit A might be an interview with Robyn Perry that appeared in the September issue of Artillery, in which the museum’s director, Arnold Lehman, states, “I admit that I was also a painter. A failed, badly failed painter...it was clear to me that I was untalented,” adding that “...for a very long time, you would be hard-pressed to find a painting in our house.”)

This antithetical arrangement is particularly galling with respect to one of the Museum’s choicest possession, Stuart Davis’ “The Mellow Pad” (1945-51). Unquestionably one of his greatest paintings, and an icon of American Modernism, it occupied Davis for the six years following WWII, a period of fundamental reevaluation during which the young lions of Abstract Expressionism took center stage and usurped whatever meager attention Davis and his fellow avant-gardists had earned over long and demanding careers. Despite its small size (a mere 26×42 inches), its dense composition harbingers ideas and techniques that will flower in his grand late style, foreshadowing Pop Art, Color Field Abstraction, the Abstract Imagists and Text Painting. So important is “The Mellow Pad” that when the BMA presented its groundbreaking “Stuart Davis: Art and Art Theory” exhibition in 1978, a full-color illustration of “The Mellow Pad” wrapped around the catalog’s cover.

Now, not only “The Mellow Pad,” but “Pad No. 4” (1947) a stunning study for “Pad,” are sequestered behind a roped-off platform the size of a small room, with chairs and a vanity table designed by Louis Dierra and KEM Weber, inaccessible for intimate viewing. At this point, short of demanding a total reinstallation of the collection, I’ll just fall to my knees and beg, PLEASE MR. LEHMAN, free these Davis paintings, grant the viewing public a more immediate experience. Allow us an unobstructed view.

Back on the streets, unobstructed views are less problematic. Cruise east on Flushing Avenue, through the Hasidic neighborhood near the BQE, past signs that read, sequentially, Old Reliable Hardware, Mexican Refrigerated Foods and CuchaFrieto Café until you come to the Bogart Street intersection. Two blocks north is Ad Hoc Art Gallery. This venue has been in operation for two years yet seems like a vestige of Williamsburg circa 1992. It shares space with Peripheral Media Projects, a silkscreen jobber that produces tee shirt and poster designs, which may account for the street-hip and punchy graphic attitude of much of the art shown. If Warhol and Rauschenberg used silkscreen as a means of negating the “handmade paintings” fetishized by the New York School, then Buy:Product (Three Years of PMP Silkscreen), Ad Hoc’s current show, brings the technique full circle. Works by Ray Cross and Garrison Buxton employ found objects like sheets of plywood and cardboard or anything else they could scrounge as grounds for a mix of paint, collage and screen-print images. In most cases the photo-screens were produced for other projects, and their images range from eighteenth-century illustrations of exotic machines to directional diagrams for folding origami. These unrelated depictions become readymade elements for the pictures. A grouping of small works titled “Bleed Prints” are panel-mounted paper towels that were used to clear a screen after use. The accumulation of haphazard images and ink stains are cropped then enhanced, creating high-keyed paintings that read like optical static from a world oversaturated with visual media.

Heading off at an oblique angle, a block west on Flushing and not even rating an official street sign (it’s relegated to a black-on-orange wood strip wired to a telephone pole) is Forrest Street. Half a block south brings you to English Kills. Directed by Chris Harding, English Kills hosts the highly recommended installation Blind Spot, an extensive architectural project by artist team Andrew Ohanesian and Tescia Seufferlein. The initial unexpectedness of Blind Spot is a jolting revelation. Hrag Vartanian’s review in the October 2007 Rail provides an insightful reading.

Pocket Utopia is nestled next to a Chinese take-out joint two blocks east at 1037 Flushing. Founded by artist/director Austin Thomas, Pocket Utopia is appropriately named, and beyond exhibiting art, it has as its mission an engagement with the community to encourage an interchange between the newly arrived artsy crowd and its longtime multi-cultural neighbors. As homage to the Williamsburg community, Utopia’s first exhibition was a selection of works from the renowned Pierogi flat files. Currently on view are the paintings, photos and films of Lucas Reiner depicting the lives of urban trees in Los Angeles

Call it love, or call it naïveté, but at the core of what makes the Williamsburg community unique are the people who sacrifice their time, space and cash to pursue their particular vision, usually with no thought of remuneration. The ‘temporary Museum of Painting, housed in the landmark Hecla Iron Works Building, is a prime example. Cathy Nan Quinlan has created not only a beautiful exhibition space, but a latter-day salon. Besides the timely exhibitions, mostly focused on contemporary painting issues, visitors will find a floating discussion group welcoming them to have a cup’o’tea and chat, rap and yak about art and all its ancillary challenges, an activity that has become an unfortunate casualty of our evermore reticent society.

As a study in inclusion, the current show, The Impermanent Collection V, unites divergent directions whose only commonality is the medium of paint. A wall-filling Naples yellow triptych, “Tuff Strut” (2006) by Larry Webb, bulges with an abundance of small and medium-sized forms. These simple shapes, in warm browns, grays, blues and reds, recall a microscopic panorama of zipping amoebas and fluttering protozoa. Julia Jacquette contributes a pair of hyper-realistic scenes of extravagant consumption. In “My Houses (View with Yacht)” (2006), we look past a gaudy chandelier and through a satin-draped window overlooking a limpid, sun-drenched pool and a yacht floating in a bay. Ironically, Jacquette’s glassy surfaces themselves embody a highly polished signifier of an equally luxurious commodity. The still lifes of Rachel Youens are composed of the stuff of daily sustenance; loaves of bread, wedges of fruit and slices of cheese. The arrangements imply various narratives, with their casually discarded rinds and architecturally stacked and balanced elements that threaten to topple at the slightest adjustment. With a tip of the hat to the Metaphysical still lifes of Morandi, Youens incorporates a nubby surface and tonal approach into her depiction of form, but her expanded range of hues and intensities deliver a very contemporary punch to the pictures. Also included in “The Impermanent Collection V” are Michele Araujo, Suzanne Chamlin, Greg Kwiatek, Susan Mayr and Hilda Shen. If you’re in the neighborhood and you want to talk painting, stop by any weekend.

Kevin Beasley: A view of a landscape

A view of a landscape opens with Kevin Beasley’s relief, The Reunion (2018), a heavy “slab” of guinea fowl feathers, Virginia soil, and cotton built up and suspended in polyurethane resin.