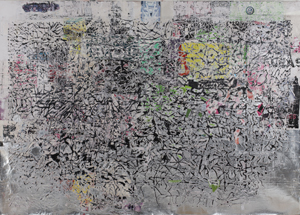 Mark Bradford, recipient of the Whitney Museum’s 2006 Bucksbaum Award, takes the title of his exhibition in the museum’s main floor gallery, Neither New Nor Correct, from map historian Peter Barber’s determination that a 1715 world map claiming to present “new and correct” data was in fact doing neither. It presented an image that “looked” like a map of the world (using familiar cartographic language), and assumed (rightly) that viewers would not know the difference. The heavily distorted map retains its authority based on the tradition of maps even if its information is more (as Stephen Colbert would say) “truthiness” than truth.

Bradford states that his paintings are “neither new nor correct”—meaning that they are not made by surveying land and taking measurements; he uses a different method of mapping. The place is South Central Los Angeles, where he was born in 1961 and continues to live and work today. He gathers material from neighborhood streets: posters, flyers and notices advertising local commerce and culture—from music and sports events to hair and nail care, real estate and prayer meetings. Bradford notes that the weather in southern California, and “the fact that workers do not clean the rubbish as frequently in this part of the city allows the material to cling to fences and buildings.” This makes the environment of South Central an on-going record of its own local economy, and gives Bradford a rich palette of material as he explores the dynamics of that economy.

Back in the studio, he collages his canvases in thick, fragmented layers. He uses string to draw lines through the surface, connecting and emphasizing certain elements while obscuring others. The results are large, sprawling visual investigations of South Central L.A., a mapping of one minority community through its businesses, its street culture, its use of public space and its evolution over time.

His starting point is local commerce, a main artery of social interaction, which Bradford knows from experience: a “third-generation hairstylist on my mama’s side,” he grew up in (and later worked at) his mother’s Foxyé Hair salon. He first gained art-world recognition (and repeated comparisons to Mondrian’s Broadway Boogie Woogie) for collages composed of tiny squares evoking dense urban grids. These squares were reused end papers from the process of perming hair—a direct reference to Bradford’s livelihood in South Central. Though he no longer works regularly at the salon, by collecting and reconfiguring local signage he continues to map merchant life as he sees and experiences it.

While adding layers, he simultaneously sands, scrapes and washes them away. The string pathways—like veins running through a living organism—are visible above and below the surface as he alternately embeds them, covers them and peels back the covering. (He reveals a cross-section of the painting’s interior by carving a small circle out of Bread and Circuses.) By excavating the city for material, layering that material into his works and then excavating the pictures themselves, is Bradford attempting to create a replica of the street and freeze it in time? More likely, he is reproducing the process of layering and decay that forms the substance of urban space—each canvas becoming its own (determined and finite) environment.

Of the countless eye-grabbing moments in Bradford’s environments, one stands out due to its relative legibility: in the top left corner of The World is Flat, he has collaged a mostly intact panoramic advertisement of basketball players in action. On first glance, it seems like a shot from an actual game, but a closer look reveals that the players are each wearing a different uniform, and there are at least four balls in play. It is a composite image, bringing together dramatic moments from multiple games in a dance-like composition. This is done to convey (as the creator of the ad might say) the ultimate adrenaline rush—and graceful artistry—achieved in sports. Like Bradford’s work as a whole, this image sacrifices literal documentation in favor of a mapping a fuller, richer, and perhaps truer picture.

Becky Brown is an artist and writer based in Brooklyn.

Stephanie Dinkins: On Love and Data

For Dinkins, one of the main problems with AI is the existing data it uses.