When TR Warszawa brings Krum to BAM’s NextWave this month, it will be both director Krzysztof Warlikowski’s second appearance at the festival, and the opening half of the company’s latest incursion into Brooklyn’s theater scene. In October 2004, Warlikowski’s concerted, intermissionless The Dybbuk haunted the Harvey Theater, then in November, TR artistic director Grzergorz Jarzyna’s raucous Risk Everything—busting at its seams with a punk vibe and a bad bloodlust—spilled out of St. Ann’s Warehouse’s glass side door and onto the brick street. This time around, Warlikowski takes the autumn spotlight with Krum’s bout into family underpinnings, then in June 2008, the company returns to occupy Dumbo’s roofless, pre–Civil War Tobacco Warehouse, across Water Street from St. Ann’s, for Jarzyna’s flagrantly ambitious 2007 Macbeth.

Krum, written by Israeli playwright Hanoch Levin in 1975, is the tale of a son’s return and, as social stanchions begin to prize free, he’ll witness the unendurable and attempt a novel. Levin died in his mid-fifties in 1999, having written more than 60 raw satires and comedies that drew the ire of his nation’s political mainstream, and its religious and military ideologues. As with The Dybbuk. which juxtaposed a traditional tale of Jewish spirits with contemporary work of Hanna Krall, Warlikowski infuses Krum with characteristic concentration and TR’s high-amperage actors. (His production of Tony Kushner’s Angels in America plays in Poland this month; company rep ranges from Neil LaBute and Sarah Kane to Dogma director Thomas Vintenberg’s The Celebration and Dostoyevsky’s The Idiot.)

Risk Everything, greased as if on crack pipe dregs and pumped with a blaring rock soundtrack, was Jarzyna’s willful adaptation of one of Canadian playwright George F. Walker’s 1997 Suburban Motel plays, with TR mainstay Aleksandra Konieczna as its outlandish, half-feral spine, juicing her across-town confrontation with Steamboat Jeffries, the antagonist who never appeared. First produced the year before as part of TR’s Terrain Warsaw program, Risk Everything literally hit the street in Dumbo, where at home it had played in the central hall of Warsaw’s train station. (In an interview with Tom Sellar, Jarzyna mentioned how Dumbo’s industrial monoliths reminded him of the Silesian environs of his youth.)

Monika Fabijanska, director of the Polish Cultural Institute here, spoke of TR’s directorial duo. “Teatr Rozmaitosci [or Variety Theater, which under Jarzyna has become TR Warszawa] had been one of the best repertory theaters in Warsaw, showing what you expect to see in the theater. Something amazing had been happening in Poland—around 1989 everyone was asking ‘Are we going to mimic what’s been happening in the West?’ But Polish culture took a second route, and crucial to that has been TR.” Jarzyna took the reins at TR when he was barely thirty—“around 1998,” Fabijanska said, “when he was the enfant terrible of Polish theater, bringing in new nerve.” In comparing his and Warlikowski’s work, she said that their approaches are “very, very different. It’s a phenomenon to have a theater that’s the most acclaimed theater, and these two directors are the best, but all that’s similar is their courage and openness and talent. They’ve been completely changing the scene over the past several years.”

“At the beginning,” Fabijanska said, “they both staged classics. Warlikowski did Hamlet and [more recently] The Tempest. Jarzyna did Magnetism of the Heart [adapted from Aleksandr Fredro, regarded as the Polish Molière], from a 19th century Polish classic, an obvious part of your education there—and he produced something entirely different from it. Jarzyna is extravagant and funny, with a lot of bitter taste underneath. Warlikowski especially has shown where he’s rooted, introducing controversial themes into classical theater, juxtaposing very contemporary social and moral issues. He’s heavier than Jarzyna; his is the deep grey color of an artist of the soul, and his is really metaphysical theater, a journey that’s a trauma and a therapy. Krum is almost three hours with no interruption, and it just flows. It’s a quality I find in Bergman’s cinema, which put us as close as possible to real time. It has this element of catharsis—it’s very classic theater, but at the same time it’s very different from what we’re used to. He’s said that he was at the age of the character [in Krum], and hopeless—the theater around him had become a circus of rituals where he couldn’t find any real contact. Being lost and disappointed, he felt the void of the generation.”

Another company initiative is TR/PL, in which young writers are produced and published. One result is Dorota Maslowska’s first play, Two Poor, Polish-speaking Romanians; Maslowska came to CUNY this spring for its reading at the PEN World Voices Festival (her 2003 novel, Snow White and Russian Red, was a smash and, in Monika Fabijanska’s words, was “absolutely controversial”). TR’s work has become central to a Polish theatrical resurgence, PCI director Fabijanska said. “Poland had been known for its alternative theater in the 1970s. One part had been anthropological and experimental, using a lot of crude materials—that was [Jerzy] Grotowski’s part. [Tadeusz] Kantor recycled, by going back into history. His productions were deeply rooted in the history of the Second World War, of Poland losing its entire Jewish population, where Grotowski used the mind’s expressing the body in a sort of shamanism.” (The Wooster Group’s recent Poor Theater opened with a videoed Grotowski homage.)

Kantor’s magnum opus, The Dead Class, had come to La Mama in 1979. He’d adapted large parts of The Dead Class from Witold Gombrowicz, mining The Marriage, that writer’s nightmarish three-act desecration of authority, and his first novel, Ferdydurke, a prescient romp into youth obsession which gained acclaim in 1937 before Gombrowicz began an inadvertent Argentine exile at the onset of the Second World War (a Brooklyn Rail piece in January 2005 covered Yale’s acquisition of the writer’s archive). While Ingmar Bergman would put Gombrowicz’s first play, Ivona, Princess of Burgundy, in the rep of Sweden’s Royal Dramatic Theater, Kantor’s fusion indicates how all facets of his work are being staged, with companies utilizing stories, novels, even his renowned Diary (which Yale University Press will publish as a single volume in 2009). La Mama (whose Tel Aviv branch worked directly with Hanoch Levin, who wrote Krum) remains at the forefront in this and other Polish work, from last year’s New School production of Gombrowicz’s marvelously ludicrous Operetta, which beefed an eager student cast with Judith Malina and Hanon Reznikov of the Living Theater, to the dance company Dada von Bzdulow’s Several Witty Observations and a 2001 Polish piece that excerpted Ferdydurke. La Mama also brings the work of Stanislav Witkiewicz, Gombrowicz’s arch colleague in absurdity, who killed himself when the Nazis invaded. Other recent productions include Teatr Piesn Kozla’s version of Gilgamesh, and the immersion into visual intensity of director Leszek Madzik’s Scena Plastyczna KUL, who brought the wordless, darkened amber scenes of Passing Away early last year in their only New York appearance to date. 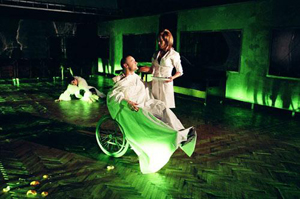 Grzergorz Jarzyna’s first production for Teatr Rozmaitosci, Witkiewicz’s Tropical Madness, was pseudonymous; his early professional productions included Gombrowicz’s Ivona and a TV production of that playwright’s fragment, Historia. Magnetism of the Heart was revived in 2005 for Pittsburgh’s International Theater Festival of Firsts, and he’s just completed a Giovanni after Mozart, with The Lion in Winter opening next month as a coproduction with the Burgtheater in Vienna. He spoke on the phone from Warsaw about his sprawling Macbeth, saying he chose “to take the original text and put the story in contemporary times, with Macbeth and Duncan in the Middle East. The idea was to connect theater and movies, using media stuff like cameras, and videos as well, as its elements.” First staged in 2005 in Warsaw, the site was the hall of the Warynski works, “an old factory building of Bumar, the only Polish manufacturer that sold arms to Iraq after the invasion.”

Monika Fabijanska saw the original production and termed it “filmic theater, cinematic—but it also goes back to the Middle Ages, when the same story was being told by many characters. They used to put together mysteries—the life of Christ or the Madonna—told from several different stages, with windows onto one another for immediacy.” The factory shell in Warsaw was destroyed two weeks after TR filmed the production for Polish television, and Jarzyna said the Tobacco Warehouse is the first space appropriate for restaging the piece. Susan Feldman, artistic director at St. Ann’s, spoke of returning to the Tobacco Warehouse for Macbeth. “We’d worked there in 2003, with the stilted puppet movement of Teatr Biuro Podrozy’s [Travel Bureau] Carmen Funebre, but Macbeth is going to be the first full-blown theater piece there. We’re going to build an outdoor theater in the triangular part, with the Brooklyn Bridge overhead. Some of Grzergorz’s images are of modern warfare—some characters are beheaded. There’s a strong partnership between St. Ann’s and TR, and over thirty people are coming over for Macbeth. Part of the reason we’re the only ones doing it is that it wasn’t designed to tour. We’re the co-producers, in order to build a set that needs to be two stories and flexible, so that TR can take it on the road.”