Conversations With the Patriarchy

Taylor Mac is a New York-based playwright and performer. His work, including Red Tide Blooming and The Be(a)st of Taylor Mac, has been staged locally at spaces including PS122, The Public Theater and The Spiegeltent. Internationally, he has performed at The Sydney Opera House, London’s Soho Theatre, Battersea Arts Center Theatre and Stockholm’s Sodre Teatern. He was the premier recipient of the Ethyl Eichelberger Award, as well as a playwriting fellow with The Ensemble Studio Theatre’s New Voices program. Mac is currently a HERE Arts Center Resident Artist, where his new play, The Young Ladies Of…, (director, Tracy Trevett) will run from September 26–October 19.

Chase (Rail): You describe yourself as a “theatre artist working in the genre of pastiche.” What do you mean?

Mac: It’s kind of a combination of traditional playwriting, performance art and cabaret and lectures and installation and visual art—it’s all of it kind of squished together. I’m taking lots of different forms and styles and I’m utilizing them to create something unique out of that. I’m not taking other people’s work; it’s all original work. And it’s all songs, my own original songs and my own original text. Basically what it does is it allows me to do whatever I want to do. In the middle of a kitchen sink drama, I can have the entire cast break into song if I want. I’m kind of on this trek of exploring and criticizing and learning about homogeneity and why we’re so ruled by it in many ways, so what pastiche does is it’s a counter balance to homogeneity in theater. It’s not just one thing, you can’t just look at it and say, ‘it’s just a drag show,’ ‘it’s just cabaret,’ ‘it’s just a play.’ It’s all of these things squished together. 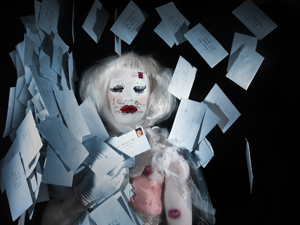 Rail: Could you talk about your latest work, “The Young Ladies Of …”?

Mac: When my dad was in Vietnam he put an ad in an Australian newspaper asking women to write him because he was having his leave in Sydney, and he wanted to hook up with chicks while he had his leave. He wasn’t married to my mom yet, they hadn’t met, I wasn’t born. So he put this ad in the paper, and thousands of women wrote him. So many women wrote him that he had to pass out the letters to other men in his unit. He couldn’t keep track of all the women that he was writing to. He died when I was a kid so I really never knew him. In 2004, my mom sent me all of these boxes full of all these letters that she had in the garage for many years, so I pieced together this show about the discovery of these letters and the desire to…when you grow up without a father you’re always curious about who he is and what he would have thought of you and all of those kind of questions come up. So, that’s a lot of what the show is about, me trying to figure out who my father was via these women.

Rail: Is this the first time you’ve used such a personal source material?

Mac: No. Something that I do when I create my work is I say ‘what in my life do I not want anyone to know about me?’ and then I say ‘okay that’s what my next show is about,’ so they tend to be very personal, my shows, or at least they’ll have very personal elements to them, but I can then branch out from that.

Rail: Are they correspondences between your dad and these women, or just the women writing to your father?

Mac: He wrote, to at least a few of them, wrote a couple of times. I do know that he was writing to a lot of women and there were double replies, but I don’t have any of his letters. I don’t know what he said, I just know how they responded. So there’s very little information about him in the letters. But to me what was interesting was when I got the letters and I was reading through them I was looking for that information and I thought, well that’s the show, not the small talk, not what these women are saying, but the fact that I’m wanting this information about my dad. And that’s an interesting topic to explore, why do you want to be known and want to know and what’s that about and what’s this masculine lineage that we’re being passed down. I’m talking about the desire to be accepted by the patriarchy and, even though it’s not something I enjoy, I still have this desire to be accepted by it. My father came from a very tough Texan military farm family; they were conservatives. What I do in the show a lot is juxtaposition. His life as a conservative Texan, a macho guy, a military guy and then my life as this New York City drag queen, and I’m trying to find where the common ground is, so what this show becomes about, in a small way, but metaphorically in the larger picture, is the polarization that we’re dealing with right now.

Rail: I’m curious to hear what you think your dad, being somebody from the South, a strict military family, a Texan, would think of the show? Is it accessible to that type of person?

Mac: Definitely, I hope to take this show all over the place. I like performing for like-minded people. I do. I don’t see a problem with that at all. I think theater is about community, so you take the community that you’re living in and you say, ‘I’m going to make work for this community’ and the community I live in happens to be blue-state New York. So I’m okay with preaching to the converted and taking them through an experience specifically made for them, but I’m also interested in taking it to places where people aren’t so like-minded. And I hope people will come that are a little bit more like my father. I’ve had military people come to my work before, and it’s very anti-war—my last show was very anti-war—and they love it, and they go out of their way to tell me so, which I really appreciate, which shows that they’re more open than our idea of them is. So are we. I communicate responsibly—at least I like to think I do. If I just spew hatred then I’m not communicating and as a theater artist that’s your job, to communicate, so I try to do that.

A selection of virtual theater spaces to gather in

In this time of actual theater closures, virtual theater spaces are burgeoning. Following is a curated list of live theater programming by top NYC innovators, now available for your at-home viewing pleasure and participation.

Aoko Matsuda’s Where The Wild Ladies Are

Matsuda introduces several stories, discrete but thematically connected. At the end of the book, each story’s original ghost story is summarized for reference. While sometimes female protagonists begin as self-deprecating, they do not succumb to victimhood.