Kabuki, the highly stylized, spectacular theatre of Japan, has over its four hundred year history become codified, sacralized and elevated to the status of a national treasure. It has the equivalent position of Grand Opera in Italy, Kathakali in southern India, Shakespearean performance in England and perhaps the National Football League in the United States. All of these performance forms have humble origins. They were under constant constraint from civil authorities and were publicly sanctioned as a moral danger to their communities. Early Kabuki shares with the Shakespearean theatre of the 17th century an outlaw status, a reputation for sexualized, transgressive behavior and a rabid following of both working class and aristocratic patrons.

Similarly, Punk’s energy and aggressive, anti-establishment posturing was attractive to a jaded rock and roll audience of both working class youth and college-educated intelligentsia.

Struck and inspired by the parallels, The Theatre of a Two-headed Calf has been working with Kabuki and its theatrical devices for the last three years, playing with the form through the lens of 1970s Punk performance. Brooke O’Hara, the director, lived in Japan in the early nineties and was a frequent and enthusiastic spectator of Kabuki. She says that although she admired the form she would never be able to replicate it: “No one is going to seriously train a Westerner in Kabuki. You are talking about a lifetime of study and practice.” Two years ago, she taught a class at NYU’s Experimental Theatre Wing investigating ways in which western actors could approach Japanese theatre texts. Out of that class came a unique and critically appreciated production of Shaw’s Major Barbara at La Mama and a desire to attempt a traditional Kabuki text.

She chose Chikamatsu’s Drum of the Waves of Horikawa because she had carried around Donald Keene’s translation since Japan and the play had the most female roles as well as the least narration. In the notes to the script (which O’Harra has heavily modified), Keene suggests that the play could be described as a feminist piece or at least more feminist then most Kabuki plays. The company worked with the physical manifestation of descriptive sections of the text such as “her heart shuts down for several moments” or “she dies a tiny death.” She also experimented with Mie, the powerful and characteristic poses taken at moments of intense emotion. As the eminent Kabuki scholar, Samuel Leiter, has written in The Frozen Moment: “All of the actor’s physical and psychic energies are concentrated on that one brief moment when he draws himself up into the pose.” The technique is distinctive and although Russian directors Vsevolod Meyerhold and Sergei Eisenstein experimented with “recoil” and “reverberation” as part of their studies in biomechanics in the 1920s, it is unique and particular to Kabuki.

O’Harra and her collaborator, composer Brendan Connelly turned to Punk as a way to develop musical and physical gestures that would illuminate Chikamatsu’s text.

All of the gestural and dance sequences in The Drum are taken from videos of classic Punk performers such as Nina Hagan, The Germs, The Slits, Iggy Pop and Siouxie and the Banshees. There are some “frozen moments” where actors take on the cross-eyed, extreme facial expressions reminiscent of Kabuki but O’Harra stresses that most of the movements are exact replications from Punk. Two Headed Calf is not trying to
duplicate or faithfully render Kabuki. Their contribution has been the bringing together of two extreme forms and “letting them rub up against one another.”

Another intriguing element of the piece is the insertion of brief dialog from classic Preston Sturges movies. In moments of great passion and stress, the actors start suddenly speaking the insanely fast, screwball dialog from, say, The Lady Eve. These interruptions occur so rapidly that the spectator’s sense of linear narrative is playfully spun around. In the midst of a highly stylized and estranged staging, the familiar vocal patterns of Henry Fonda and Barbara Stanwyck seem to make available the psychological foundations of the scene. 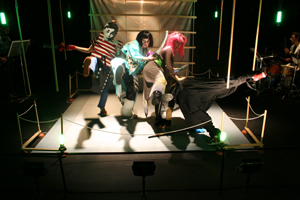 The Theater of a Two-Headed Calf. Photo by Brooke O’Harra.

Any comparison between Punk and Kabuki would bring up far more differences than similarities. Punk never developed into a highly refined theatre practice that would be embraced as a national treasure and Kabuki, while socially transgressive, was so heavily censored that the possibility of producing performances of any political significance were nonexistant. However there are parallels and equivalencies that are notable, and that makes for interesting theatre. Both forms had rabid fans that were attracted by the rebellious energy and provocative attitudes of the principal performers. This aggressive posturing and stance of Kabuki and Punk led to the development of elaborate and extravagant gestural languages that were particular to their respective forms. The choreography of Johnny Rotten or the Ur-Punk Mick Jagger is as distinctive as that of Ichikawa Danjuro II. Both forms were originally located in sites of outlaw culture, prostitution, drugs and dissipation. While the Bowery and East Village bear little physical resemblance to ‘the floating world’ of Edo, and Osaka, both were areas of forbidden pleasures that provided inebriation, excess, sexual indeterminacy, and, most importantly, theatre. The original characters used to represent Kabuki meant “slanted” or “deviant”.

Kabuki began as a women’s theatre in early 17th century Edo. According to Donald Shively, in a classic essay on the period, the women used their sensuous dances and cross-dressing to advertise their secondary occupations as prostitutes. These early Kabuki troops were extremely popular and attracted an enthusiastic and unruly audience of townsmen and some samurai. Shively quotes an uncomplimentary Confucian scholar:

topknot, have swords at their sides and carry purses. They sing base songs and dance vulgar dances; their lewd voices are clamorous, like the buzzing of flies and the crying of cicadas. The men and women sing and dance together.”

In 1628, women were banned from the theatre but nonetheless performed illicitly as late as 1642. “Youth Kabuki” companies consisting entirely of young men succeeded the women’s troupes. The young men proved to be as wildly popular and problematic as the women. They were banned in 1652 for prostitution and disorderliness. Finally, “Mature Men” Kabuki was established wherein the young men who played the women’s parts (onnagato), were required to shave their forelocks so as not to be too enticing. The civil authorities continued to reform or restrict the development of Kabuki but it became and remained the most popular performance entertainment in the cities into the beginning of the 20th century.

The Two Headed Calf production is contained by a very small, 12-foot square acting area surrounded by two drum kits, an electric bass, keyboards and extra percussion. Connelly and his musicians are an integral part of the event as they are in all of Two Headed Calf’s work. Connelly cues the music and action with loud counts and occasional screams and gruff commands. One imagines Toshiro Mifune as band leader. Tempo and timing are crucial to the piece and the exposure of the composed and constructed nature of the event provides the audience with a kind of clinical pleasure. This is pleasantly combined with the equally pleasant visceral effect produced by the histrionics of the actors. Elaborately decorated, they make extravagant entrances and exits to hard-core Punk anthems. All of this activity is generous, carefully modulated and done with great energy and commitment. Connelly points out that the “watch me while I am doing this” aspect of both the actors and the musicians “is prevalent, arguably the essence of both forms.” These loud, florid sections serve to frame the quieter, more chilling moments.

The Drum of the Waves of Horikawa features many of the lurid plot elements that are common to Kabuki drama. The tiny set overflows with rape, intense shame, suicide, beheading and elaborate revenge killings. While Punk favors frenzy, choreographed chaos and overt hostility, both forms share an appetite for extreme attitude and posturing. The image of a defiant rebel in a super aggressive stance, spewing out mono-maniacal invective, is common to both. There are many opportunities for the excellent cast, headed by Heidi Schreck and David Brooks, to overindulge themselves, but the performance is so tightly choreographed and orchestrated that this seldom occurs. The piece is intense but carefully crafted and focused, an obvious benefit of two years of rehearsal.

After a successful run at Providence’s Perishable Theatre last spring, O’Harra expects that New York audiences will appreciate the joy and rigor of the performance, the enthusiasm and commitment of the actors. She says, “Of anything we’ve made, this is the most audience-friendly, even though it seems the most obscure project.”

ROGER BABB was for many years a playwright / director with Otrabanda Company. He worked as an actor for Joseph Chaikin, Jim Neu, Julie Taymor, Merideth Monk and many others. He taught at Princeton, NYU, Swarthmore and most recently at Mt Holyoke College.

The first African American to sing a leading role with the Metropolitan Opera is cast as Ulrike in Verdi’s Un ballo in mascara. A century earlier when the opera debuted in Italy, the composer was compelled by censors to repeatedly change the setting, first from Sweden to Poland, then from Poland to the United States, specifically to Boston.

Asked by a music writer at what point did he realize his band was going to be a success, a singer songwriter says that he knew instantly. "There were lots and lots of people ready to identify with what I was feeling. Hatred! Hating everything, but not being offensively hateful (chuckle). It was like hate from quite gentle people." After the band breaks up, he titles his first solo album Viva Hate. At first this seems like an extension of his famously combative personality, but in the years that follow, as he makes frequent anti-immigrant remarks, repeatedly criticizes those who speak out against sexual harassment in the entertainment industry and, during a performance on the Tonight Show, sports the logo of a notorious far-right political party, more and more of his fans (or, as they now have to think of themselves, ex-fans) conclude that the kind of hate he espouses has morphed from post-adolescent angst into pure cruelty. In short, it’s no longer charming.

Venet’s current show, 1961 & 1963: les origins at Ceysson & Bénétière Paris, puts him back into that post-Duchampian / Yves Klein context with early minimal works that ponder the power of black and the pull of gravity through an inter-disciplinarian methodology.