In Comicopera, Robert Wyatt’s fifteenth solo album, the listener travels. A natural progression from Wyatt’s last release (2003’s Cuckooland), this album, while technically worked out, leaves room for the spontaneity of multiple performers. This move from the cloistered songs of his previous recordings was not random; Wyatt was seeking to mimic a live sound. He cites a love of big bands—Duke Ellington’s and Charles Mingus’s in particular—as an inspiration because of their ability to let every player stand out and make an individual impression. When you have talented friends like Phil Manzanera, Brian Eno, Paul Weller, and the jazz musician Alfie Benge (Wyatt’s wife), working with you, you can presumably create whatever sonic atmosphere you want. 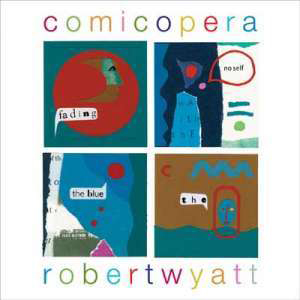 Wyatt’s “opera” is divided into three acts, “Lost in Noise,” “The Here and There,” and “Away with the Fairies,” each conceptualized as a separate entity, and make no mistake, this is a concept album. Wyatt says that his perspective actually shifted in each act, and that he sought to take his listener through an imagined performance. In this way, he has made an album akin to a film score, though the film is only available for viewing in Wyatt’s subconscious.

Wyatt is an old hand at the art of home recording. Since a 1973 accident that left him wheelchair-bound, he has been making fine-tuned, often deeply intimate solo recordings that show the young folks who espouse the do-it-yourself aesthetic how far the craft can be taken. (He also occasionally receives visiting collaborators like Björk, who stopped by to add Wyatt’s vocals to her 2004 song “Submarine,” bringing his music to a new audience.) But while there are hints of Cuckooland in Comicopera, the new album feels less claustrophobic and hence more accessible than his previous solo records. “On the Town Square,” an instrumental that uses steel pan, is particularly expansive, and gives the album its most carefree moment.

Wyatt has always had a fondness for cover songs, including now-famous renditions of the Monkees’ “I’m a Believer” and Elvis Costello’s “Shipbuilding,” and he starts Comicopera with another—“Stay Tuned,” written by Norwegian singer-songwriter Anja Garbarek. Wyatt’s version is a dark ballad, including tinny drums, an ethereal feminine voice reminiscent of a musical saw, and a brass section.

The next track, “Just as You Are,” is a downbeat number written with Benge, and features the most overt sentimentality on the album. But not to worry—if you prefer Wyatt the Somber, he later revisits the song with a warped remix, “Fragment.”

Wyatt, a longtime Communist, is known for his bluntly, and wryly, political lyrics (“East Timor” from the 1985 album Old Rottenhat: “East Timor, whose your fancy friend Indonesia?”). He is more subtly clever here in the song “Be Serious,” when he sings, “I really envy Christians / I envy Muslims too / It must be great to be so sure.” In “A Beautiful War,” co-written with Eno, he imagines himself as a jolly bomber, raining destruction from above (“It’s a beautiful day / For a daring raid / I can see my prey from afar / So I open the hatch / And drop the first batch”). The dramatic high point of the album is the track that follows, “Out of the Blue,” in which the tables are turned and the bombs are falling on him instead (“You burned my house apart / You planted everlasting hatred in my heart”). The effect is jarring. Wyatt uses a tool he calls an Enotron—which is just Brian Eno’s voice manipulated electronically—to create a sense of urgency, a powerful effect.

After all of this intensity, Comicopera’s third act is a release. Here, Wyatt pays homage to his Latin influences: Che Guevara, Frederico Garcia Lorca, the music of Cuba. In a subtle act of solidarity, Wyatt no longer sings in English for the rest of the album. It is a conscious choice. Wyatt has said that he felt alienated from Anglo-American culture after getting political with Comicopera’s bombing sequence, and that he then set out on a quest for other kinds of meaning. Listeners are taken through a process that ends where it began—revisiting the most lighthearted song, and finally ending on a high note with a tune that conjures the congenial sound of the Buena Vista Social Club.

Comicopera is neither funny nor operatic, but Wyatt doesn’t intend to divert us. He refers to the Greek meaning of the word comedy, which he says is not “humorous,” but “about human foibles.” This is an album that holds a magnifying glass over humanity, looking for a reality check but leaving room for bliss.

When we first meet Michael, the narrator of "In Judy’s Room" by Ben Goldstein, he has just arrived at a hospital in the Berkshires to receive treatment for an unspecified mental illness. We learn that, to Micheal, the onset of his illness is inextricably entangled with both love and heartbreak, a memory of a violent sexual rejection that he believes led him to commit his own monstrous act. The story's tension comes from Michael's journey between the past and present, his struggle to decipher the real from the unreal. One of the pleasures of reading this story for me came from Goldstein's gorgeous descriptions of the natural world and the town itself. As we navigate Michael's emotional landscape, he simultaneously moves through a setting so idyllical that it too feels dreamlike and magical—a place where the townspeople have a “yearly tradition of recreating a famous Norman Rockwell painting” and where Judy Garland “once dressed up in a gleaming ball gown and heels right out of The Wizard of Oz.”

Musicians are always playing off one another, and their own sounds are altered by these different contexts. Guitarist Grant Green sounds very different on two separate recordings of “My Favorite Things,” one with the low-slung, stepped-back style of pianist Sonny Clark, another with the ethereal modal reach of pianist McCoy Tyner. And these particularities are not limited to the musicians, but to the spaces in which the music is played.