Despite the wetness, the fifth annual Green Man festival in Wales—a country in the southwestern part of the British Isles, where the wind blows off the Irish Sea through your ears and into your brain—was a wonderful verdant extravaganza of folk music and fine fellow folk. The Glanusk Estate, a remote national park surrounded by soft pastures, good old farmland, and the bottle-green Table Mountains, opened its gates for this year’s festival, inviting 10,000 people to pitch their tents on its belly until we said our exhausted farewells three days later, covered in mud. But first things first.

Fernhill Castle, the most haunted castle in Wales, staged the first Green Man festival back in 2003, luring a tiny audience of 345 people through its ghostly gates. Despite steadily rising audience numbers, and the presence of peerless artists like Joanna Newsom and the devilish genius Bonnie “Prince” Billy, the spirit of the festival has happily remained as intimate and cozy as it was then. 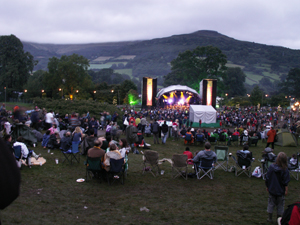 With only three stages—the Main stage, the Folkey Dokey stage, and the Green Man Café stage—the festival is dwarfed by its English brothers Glastonbury and Reading. In contrast to those giants, with their oceans of 180,000 tents, Green Man is an intimate affair, with great entertainment for kids and grownups alike. You’re just as likely to see some preschool revelers blowing through clouds of bubbles as you are to spot Joanna Newsom chatting with friends by a wigwam. The Green Man attracts a happy, hairy crowd of nature-loving pals who bounce around the trees, their long hair flying in the wind, rather than icy platoons of cool indie foot-tappers.

Like many Green Man folks, we arrived the evening before the official first day, pitched tents, and ventured out for some bread and beer. Happy crowds gathered on the main green meadow and enjoyed the various culinary options, purchased from little organic bodegas all around the fields. Children tumbled down the soft rolling hills, and if it wasn’t for the icy breath and the many layers of fabric on our bodies, one would not have believed that such a locus amoenus actually existed. The next day, however, was filled with sun rays and a very promising lineup, including headliners Newsom and Bill Callahan. While some of the bands of the afternoon, like Indigo Moss and Euros Childs, were disappointing, Rachel Unthank & the Winterset brightened up everyone’s day. The all-female quartet from the north of England enchanted the audience with beautiful voices and graceful cello and fiddle playing, successfully bridging traditional folk and the mainstream. Hats off, too, to Rachel and Becky Unthank’s wonderful feet, courting the audience with their charming clog-dances.

But hats quickly on again, because the rain’s dark cavalry was waiting for us in the dusky sky. Looking back, maybe this was fitting: Stephen Duffy had finished his set and it was time for the weary tones of Bill Callahan. To some people, the sound of rain may be as flat as the drone of an autobahn, but in fact it offers so much more: tapping, showering, drizzling, and simple tranquility. Bill Callahan, formerly known as Smog, was a lot like the rain—a rather complicated fellow who only grows on you if you keep your ears peeled. His laconic singing, earning frequent comparisons to Leonard Cohen, might leave you unmoved on first listen, but will reveal beautiful and deeply experienced songs the more time you give it. While others try to win you over with fancy and flowery decor, Callahan’s lyrics are often stripped down to the bone—one might even call his sad, doomed songwriting Kafkaesque. Watching him live makes you realize how concise and classic a man he is: Dressed with a shirt tucked neatly into his jeans, he said barely a word to the audience. Yet he occasionally kicked out a quirkily considered dance move. The band has changed since the days of Smog, though much of the set—apart from new songs like “Diamond Dancer”—was drawn from Smog’s beautiful A River Ain’t Too Much to Love album. Behind the drum kit was Shearwater’s Thor Harris, the Norse God of Thunder; sometimes stroking a saw with a bow, other times gently pumping a melodica or creating peppery sounds like sand between your toes on the snare drum, Thor’s contributions were integral to the sound.

The first evening ended perfectly with a smiling and talkative Joanna Newsom on harp, accompanied by her Ys Street band on drums, banjo, and violin. A master of word and harp, Newsom weaves her lyrics into a stunningly colorful tapestry of fairytales that leaves the listener bright-eyed and bewitched. The band played a breathtaking version of “Inflammatory Writ” (from her first album, The Milk-Eyed Mender), and after a couple of pints everyone wandered back to their tents, freezing but happy.

No one expected the rain to carry on, but carry on it did, and the more it rained, the more everything turned upside-down. Saturday morning was truly wet, and everyone hurried into the Green Man Café to get shelter and watch Normandy native Thee Stranded Horse, aka Yann Encre. Playing kora and acoustic guitar, sometimes simultaneously, he created thick but calm melodies that evoked French chanson and West African folk music.

Still, the rain didn’t stop, and the boots of 10,000 people kneaded the drowned grass as the earth spat out the soil. By late afternoon, when the multi-talented Johnny Flynn performed his indie-folk hoedowns, everyone was sliding through a deep layer of mud.

After Johnny we rushed to the main stage to see Vetiver. Andy Cabic, the band’s singer and songwriter, is gifted with a hushed-down and honeyed voice and a belly full of diverse and fine lyrics (demonstrated to gorgeous effect on the group’s recent release To Find Me Gone). Written and recorded on tour in 2006, the album is very much a “road” record telling stories about traveling and distances, comings and goings. It reminds you of late-sixties pastoral folk and the West Coast rock of the seventies, with beautiful guitar solos and layered strings. When seen live, Vetiver is stridently dynamic, with Andy on acoustic guitar, Otto Hauser on drums, and Kevin Barker on electric guitar. With the band’s long hair blowing in the wind, Andy’s smooth singing and gentle dancing brought the sun back to the fields, even though the rain kept falling.

Our eyes were still shining brightly as we made our way through the heavy mud to see Diane Cluck at the Green Man Café. Cluck, a singer-songwriter from New York who plays piano, acoustic guitar, organ, and xylophone, has recorded five albums since 2001. Some people might describe her songs as a musical skeleton, but I also imagine them like a mountain range: strong, rough, and heavy, sung by a beautiful wide voice that reaches one peak after another. Cluck played a stunning version of “A Phoenix & Doves,” which sounded like the work of a supernatural Joni Mitchell.

Sunday did not offer any change in the weather. The ground had nearly turned into a river, threatening to swallow everyone unlucky enough not to be wearing rain boots. Arbouretum, a band from Baltimore, was the afternoon’s highlight, and it’s possible that they had called for the rain and the mud, with their portentous guitars and heavy clusters of sound soaring around like eagles in the sky. However, the most exciting event of the festival was by far the Sunday evening performance by Devendra Banhart and his musical happy hairy family.

Devendra is one of the most fascinating, unpredictable and inspirational artists of his generation: his quirky lyrics and mystical, resonant voice are beautifully freaky and fun. Seeing him swirling around on stage with his black beard streaming in the wind, swinging his hips like a snake doing a hula, made you want to get down in the mud and get grooving. This feeling was seemingly shared by some of the other musicians, who could be spotted samba-ing away at the back of the stage as Devendra rocked out his diverse repertoire, taking us one moment down to Rio and the next up to Woodstock. Banhart seemed perfectly at home in this setting—at one point he even plucked a girl from the audience up on stage to sing one of her own songs. This golden heart and feeling of shared consciousness unites probably every artist involved in the Green Man festival. Hopefully, it was blown in all different directions by the people who shared three beautiful days together in the remote jewel of a valley when they packed up and traveled home the next morning.

Laura Flierl is a freelance writer based in Berlin.