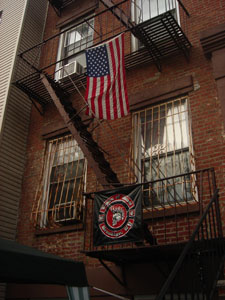 A huge, tattooed biker named Lucifer looked over at his next door neighbors’ door. He caught the eye of a toddler who was slowly making her way down the front steps.

“Hey, mami! How you doing? You going out for a walk with grandma today?”

Lucifer is the national president and founder of the Legion of Doom motorcycle club, headquartered on South 3rd Street in Williamsburg, and he really likes his neighbors. The toddler grinned madly at him. So did her grandmother, who had hurried out the front door behind her. Lucifer wished them well, and after they had gone he lowered his voice and said, “What’s sad, is that’s one of the only people left on this street. She’s actually a really, really great person. What I like is, when we have parties here, she looks out the window, she’ll wave, and she has no judgment.”

“Judgment” is a big themes with Lucifer and his club. The Legion of Doom has no racial or ethnic qualifications, and Lucifer says that is a root of its strength. “What really sold my club to most people is that there’s no prejudice. With most motorcycle clubs, or sport bike clubs, the members are either all white, all black, all Puerto Rican. When I started my club, it so happened that my wife is black, and I happen to be German.” Before he established the Legion of Doom, Lucifer had been thinking about joining different groups. “But I wasn’t digging what I saw. It was about image, it was about being part of a gang—I don’t need that. You don’t need a vest to defend yourself.”

Lucifer founded The Legion of Doom in Williamsburg ten years ago. He had come to Brooklyn several years before that. Born in Germany, he moved with his mother and her husband to an army base in Oklahoma when he was a child. He didn’t stay there long.

“My mother threw me out when I was fourteen. The fact of the matter is, I have no family. None, zero.”

In lieu of blood relations Lucifer has created an extended motorcycle family that boasts chapters in five states: New York, New Jersey, Wisconsin, Massachusetts, Florida and North Carolina. “If you have no family, then this is the connection you have. Someone to call, when you’re down and out. People don’t realize how valuable that is. I watch my guys have children, I watch them buy homes, I go to their weddings.”

Legion of Doom members take care of one another. In mid-September, the vice-president of the club’s North Carolina chapter was killed in a motorcycle accident. His Brooklyn brethren carpooled—Lucifer said notice was too short to coordinate biking—to the funeral in Buncombe County. The Brooklyn chapter paid for the ceremony.

“The guys down there, they live in trailers. They don’t have a lot, but they love this club. We knew his mother couldn’t afford it. If she pays for the funeral she’ll have bills for the next thirty years. So she just stood there in amazement, this little white lady from rural Buncombe County, North Carolina, looking at all of us from New York. ”

Lucifer’s concern for principles of family and loyalty extend beyond his fellow Legion of Doom members. When he was asked to be interviewed, Lucifer said that he was willing to talk about his bike, but what he really wanted to explain were his feelings on his neighborhood. Williamsburg has gentrified rapidly over the past decade. No one has seen that happening from a more intimate vantage point than Lucifer as he barbecues with his “guys” outside the South 3rd Street apartment, watching the world walk by. 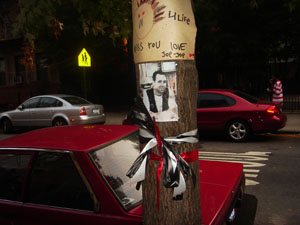 Neighboring two bedroom apartments have rented for several thousand dollars, and the previous tenants have had to relocate. “It disgusts me when I see old people having to move out of the places they’ve been living all their lives because somebody decided to call this the new up-and-coming neighborhood and make million dollar apartments,” Lucifer said, “I’ve seen sixty, seventy-year old people move out of here, they don’t know where they’re going. And that’s sad. That’s sad.”

Lucifer calls recent transplants to Williamsburg ‘yuppies.’ One of those yuppies started a fight with him recently. It is hard to imagine a skinny boy with long hair behaving aggressively around the burly biker. “He had the beer muscle,” Lucifer explained.

Earlier this year, a resident of the luxury apartments east of Lucifer’s building stopped by the front yard to ask him why Legion of Doom motorcycles were parked on the sidewalk across the street. Lucifer said that the club was trying to free up parking spots. “It’s a wide sidewalk. There was always room to walk by,” he said, defending his group’s actions.

A week later, the captain of the 90th Police Precinct appeared at Lucifer’s door and asked him to move the bikes off the sidewalk. “I said, ‘Hey, you run the show! You want me to not park my bikes on the sidewalk, we won’t park them on the sidewalk.’” The captain apologized, and explained that the neighborhood was changing. Lucifer told him he was well aware of THAT fact.

Lucifer laments his new neighbors’ lack of concern for each other. To illustrate this, he recently shared the club’s bylaws. The Legion of Doom handbook contains an extensive selection of “laws to live by” that fall under headings like “Leadership,” “Gratitude,” and “Envy.” Lucifer’s favorite category seemed to be “Leadership.” As he started reading it aloud, he was interrupted by TC, a young “prospect,” or probationary member.

“I think this is the most organized club that’s out there right now,” TC said, “we are all part of this and it’s not just a riding or motorcycle club.” In his exuberance, TC had started to sound faintly dismissive of both riding and motorcycle clubs.

“Prospect,” Lucifer cut back sternly, “were you invited to talk?”

Lucifer looked back at the book, “Here’s one of my favorites: ‘no person can be a greater leader unless he takes joy in the success of those under him or those above him.’” He used a hypothetical example of delight he would have at TC winning the lottery to illustrate this proverb. The other guys standing around looked relieved that the prospect’s talking out of turn seemed free of lasting repercussions.

Lucifer continued, “I think people forget sometimes to appreciate somebody being successful. Like, everyone’s trying to be so successful for themselves that they can’t appreciate somebody else doing something well.” In Lucifer’s moral equation, the new yuppies in Williamsburg live contrary to this rule, and in doing so, have taken something away from his neighborhood. These days, he worried, “everyone’s really taking the community thing out of the community.”

Emma Rebhorn is a writer living on the Lower East Side. Her website is redadmirable.com.

Every Wall is a Door

Relying on devices familiar to cinema and theater such as darkened rooms, outsized projection, and spectacle, teamLab aims to make visitors’ participation integral to the fruition of their artworks in the service of “democratizing” art.

Robert Motherwell’s Opens and Elegies: Drawing as a Living Art

These drawings need no elaboration. As the artist himself pointed out, their famous origin was simple. He had seen one of his paintings leaning against a larger, more vertical painting and had outlined in charcoal the edges of the small painting on the larger one, creating a door-like image. He then found the proportion “rather beautiful…"

The contact triggered by colonization of the already inhabited lands of the “New World” incentivized the disintegration of many peoples. It also brought about the establishment of figures of expression and strategies such as anthropophagy.

El Gran Movimiento, the narrative focuses on a group of miners from the rural town of Huanini who walk for seven days with the hope of finding a stable source of income in the capital city of La Paz.