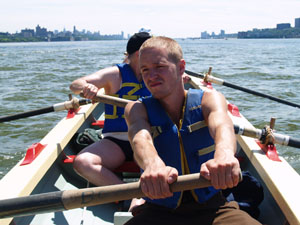 Rowing in the Hudson River during a row around Manhattan. Photo by Nadia Chaudhury.

From a not-so-quite distance, New York City looks peaceful, tiny, and conquerable. Instead of riding around in the leisurely and loud Circle Line ships that frequent the waterways of New York, I am grunting with my fellow rowers, pushing and pulling our way through the messy tides of the Hudson. We are literally right on the river in a Whitehall Gig, a 25-foot-long rowing vessel. With three fellow rowers and our reliable, all-knowing coxswain at the stern I am experiencing New York from a different angle—from the waters.

Rowing in New York City sounds impossible. In this city where grids of sidewalks, streets and subways guide us through our everyday lives, it’s easy to overlook the fact that New York is, in fact, surrounded by water. At most points the city’s residents are literally blocked from the water by fences or by harsh, jagged rocks.

There are four rowers to a boat: the stroke, two engine rowers and the bow rower. The stroke rower dictates the speed and length of the oar stroke and the rest follow. Then there is the coxswain who, in addition to steering the boat, leads the boat by telling the rowers when and what pace to row. 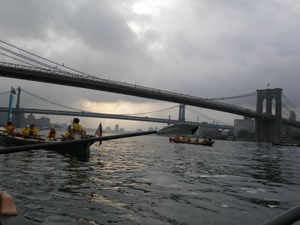 Rowing under the Brooklyn Bridge during the FISA Row Around Manhattan tour. Photo by Nadia Chaudhury.

Whitehall Gigs were rowboats used to taxi people back and forth between boroughs and to larger ships. It is thought that they received their name because they were sent out from Whitehall Street, which used to rest on Manhattan’s coast before the city extended the island with landfills.

Groups like Floating the Apple and East River CREW (Community Recreation and Education on the Water), promote greater access to our city’s waterways. The two non-profit organizations show anyone who happens to wander by their respective boathouses the ins and outs of rowing in the Hudson, the East, the Harlem and the Bronx Rivers. All for free.

Philip Yee is a familiar face to those who frequent Floating the Apple’s boathouse at Pier 40. As a volunteer, he sees himself as the activities and Pier 40 operations coordinator.

“I kind of expanded with the program,” Yee says. “When I first came down here, it was originally Wednesday rowing and it basically consisted of about seven people.” 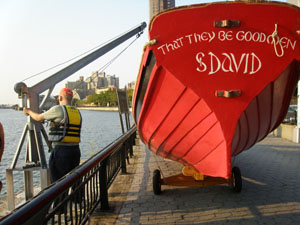 Launching from East 96th Street for the 5 Borough Ramble. Photo by Nadia Chaudhury.

On the other side of Manhattan along the East River, Mary Nell Hawk acts as the ad-hoc program director of the East River CREW. Hawk is also the vice president of the organization’s board of directors and helps with the curriculum for the group’s educational activities.

Moving uptown, she felt she needed to do something. She was already in touch with Yee at Pier 40 and she could see the East River from her apartment window. “It didn’t occur to me to even think about getting on the water.” It wasn’t even a thought for her until she read an article about groups like Floating the Apple and East River CREW who, working with City Council member Gifford Miller, were searching for increased waterfront access for smaller boats.

With St. David’s, their boat, East River CREW looked for a boat house location on the east side. After some searching, the Parks Department gave them a strip of land at 96th Street where they soon installed a davit, a mechanical arm used to put boats onto the water, and obtained a storage container for the boat and other supplies.

“Rowing the East River versus rowing the Hudson became a big deal for us,” Hawk says. “We felt that the East River is what joins four of the five boroughs and even Staten Island if you want to, but everybody touches on the East River. This year we’ve made it our focus to row to other boroughs as much as we can because we have the access.” 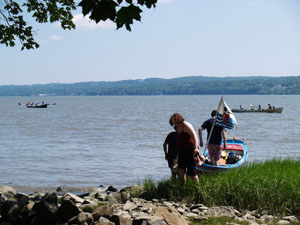 Landing at the Italian Gardens, near the New York-New Jersey border. Photo by Nadia Chaudhury.

The first East River CREW row this season was the Cinco de Mayo row. “We rowed to the Bronx River where the Bronx River Alliance was doing what they called a ‘flotilla’ of 75 canoes down the Bronx River. We joined them at the newly opened Hunts Point Riverside Park,” said Hawk.

Floating the Apple is affiliated with schools and programs throughout the city with rowing and boatbuilding programs. Among those in the past were the Graphic Arts and Communications High School through their ROTC program, Stuyvesant High School and Harbor School. With the City As School, students actually received gym credits for rowing.

“The youth program legitimized us in the sense that otherwise it would be just a bunch of old folks sitting here in our own club,” Yee says. “Getting youth involved is very invigorating and it gives us a sense of community.”

Schools programs, including Eugene Lang College at the New School University’s Lang on the Hudson and BMCC’s Now, take advantage of Floating the Apple’s facilities. In Lang on the Hudson, students build a boat to add to the program’s collection and learn about the New York Harbor. With BMCC’s program, students combine science and language arts with rowing. This past summer they studied Homer’s Odyssey on the water.

Out in the Hudson, along with an experienced Floating the Apple member, beginners get a sense for the waters by rowing around the basin at Pier 40. Those up for the challenge venture north or south of the Pier 40 and the more experienced traverse the river to New Jersey, whether to Frank Sinatra Park or Maxwell House Beach (known also as the Playa de Hoboken), a small strip of sand where another boathouse is opening up.

The sight of a Whitehall in the river is still a spectacle to many. Motor-boaters gawk as they sped by; people walking along the coast take pictures; passengers on the commuter and tourist ships wave. 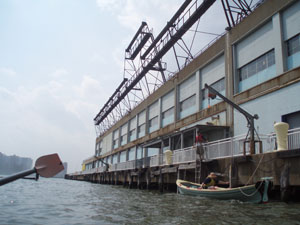 Using the davit at Pier 40. Photo by Nadia Chaudhury.

Hawk describes one instance where East River CREW was asked to take one hundred high school kids, one by one, on the water. “So we had two groups out on the boats and three groups on land. I’m out on the water and all of a sudden I’m hearing all this police sound and someone had put in a 911 call. Since then we’ve been calling the Harbor Unit.”

As wonderful as being out on the water is, it seems as though there should be more legal waterfront entrance sites. The water is a public area and everyone should have access to it, but this isn’t always the case.

During a summer outing, Floating the Apple crossed over to a cove in New Jersey and rested alongside a dock in front of a restaurant. While relaxing our arms, a uniformed man came up to us. “You’re not allowed to stay here,” he said from down the dock. We said we’d only be a couple of minutes and left soon afterwards.

“They’ll just limit the access points as to where you can get out to the water,” Yee said of the Parks Department. “The only way you could have gotten out to the water was to own a boat, rent a boat, which was expensive, or you could take the Staten Island Ferry back and forth.” Yee claims that what they are doing at Floating the Apple and the Downtown Boathouse, a kayaking shop next door to the group’s pier, is “giving people the opportunity to go out on the water and enjoy the water because the water’s for everybody.” 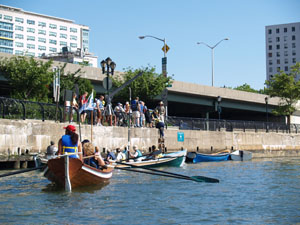 There are ways to get around it, though.

From inside the boathouse at Pier 40. Photo by Nadia Chaudhury.

“When I first graduated from college [in 1976] I did have one friend who had a kayak and he and I would come near here,” Hawk reminisced, referring to the waterfront on West Houston Street. “There was the ruin of this elevated highway that you could walk under and over this road. Then there was one place in the railing where a piece of debris had fallen in the water like a sort of step-down. So you’d put the kayak down and crawl through.”

The moment you experience being out on the water, it’s hard to resist its call. You’re bound to venture out there time after time.

“Once you’re on the water,” Yee said, “it’s an incredible feeling that I could go somewhere and feel like I’m outside the city and not really leave the city. In the 90s the parks got crowded, so this is the last open space in New York.”

Pier 40 offers free rowing on Tuesdays and Thursdays in the afternoon until dusk. Check eastrivercrew.org for East River CREW events.

Nadia Chaudhury is a former Layout Editor for the Rail.

Following the destruction of the World Trade Center towers an artist turns his attention toward the distant past of New York City, specifically to initial encounters between the region’s indigenous Lenape people and early Dutch colonialists.