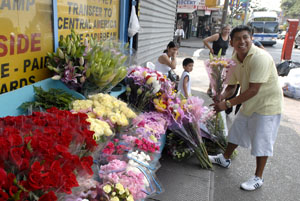 That got everybody laughing because Marie was eight months pregnant.

“You have time for love. Look at your belly, mama,” yells Johanna, a brassy young Haitian women.

Enter an English-as-a-Second Language (ESL) classroom in Brooklyn and you will find immigrants from every continent discussing the trials of life in the U.S., reminiscing of home countries and voicing their hopes for the future.

“In my country, when the rain come everybody stop their work. We sit outside and we watch the rain. In my country, everybody make time for rain,” says Jean-Paul, a handsome teenager.

“And is life easier here?” I prod.

“NO!” is the collective roar.

“I don’t believe they give you a gun,” shouts Johanna.

“But here, nothing.” Louis struggles to say something in English, gives up and out pours the Haitian Creole.

“He say…he say, he think money grow on trees here. He think he can find it on the ground, in the subway.” Johanna translates, laughing hard. “But he come here and he don’t find money anywhere. He don’t find no job. No job, no money, no girlfriend.”

I’m an ESL teacher in Flatbush, Brooklyn with a classroom of immigrant students filled well beyond capacity. Flatbush has changed since the Irish Catholic mother of my best friend grew up there in the 60s, and is now one of the most diverse neighborhoods in the country. Fruit vendors line the streets selling tropical fruit, Haitian mango and yucca. A cacophony of languages accost the ear. Recent immigrants bring the habits of the informal economy to Brooklyn’s streets. Outside the subway an old woman sits on a tattered blue blanket selling plastic baggies of vibrant spices. Another West Indian woman sits in a chair and offers hair braiding for cheap. A crippled Latino man sells plastic statues and beads out of the back of a van.

In the time it takes to watch an episode of Dr. Phil, over 120 immigrants will have arrived in the U.S. The U.S. Census Bureau estimates that one immigrant enters the U.S. every 27 seconds. New York City’s foreign-born population has been steadily increasing since the 70s. According to the 2006 census, 37% of New Yorkers are immigrants, and immigrants and their children represent 60% of New York’s population. Almost half of all households in the five boroughs primarily speak languages other than English. As New York City’s immigrant population continues to rise, the need for ESL classes has become astronomical.

Unfortunately, due to new citizenship requirements and a squeeze on ESL program and adult literacy funding, it’s becoming increasingly difficult for immigrants to attain citizenship.

In class, word is out that the new citizenship exam is much more rigorous than the old version. The students are nervous about passing, which is part of the reason they are here. Most of my students have citizenship as their status goal. They believe that English fluency and citizenship will bring better jobs and economic security. A few of my students want to go to college. Many have had only a few years of formal education in their native countries, most have not graduated from high school.

“I want to get far away from here,” says Ana, a teenager from the Dominican Republic. “I want to go to college, become an accountant. I have a visa, but I want to be a citizen.” 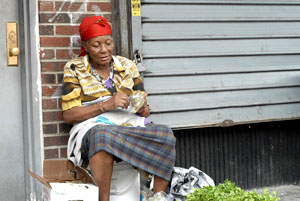 In November 2006, the Department of Homeland Security announced that U.S. Citizenship and Immigration Services (USCIS) would revamp the existing citizenship exam. A pilot of the exam was released to 5,000 volunteer citizenship applicants in ten cities in early 2007.

In conjunction with these exam changes is an over two-thirds increase in citizenship application fees. As of July 30, 2007, the cost of filing for citizenship increased from $400 to $675. Green card application fees rose from $395 to $1,010. USCIS claims that the fee increase will lead to faster processing of applications. It is still too early to determine whether this prediction is true.

Jude Pierre, manager of Camba’s—a community-based adult education and family services organization—adult literacy program in Flatbush says that the old citizenship test was much more immigrant-friendly than the piloted version. “Not only does this new test require more English proficiency and more study of U.S. history and government, but it is much more expensive.” Pierre, himself a Haitian-born immigrant, asserts that, “Immigrants aspiring to become U.S. citizens find themselves needing to enroll in literacy programs in order to start improving their English and learn about this country’s history and government system. But, can they afford to give up their five or six day a week, early-morning-to-late-evening jobs? Will their employers agree to change their work schedule to attend literacy classes that will likely end up empowering them and enabling them to understand and stand up for their rights as workers in this country?” This is precisely the position in which many of my students have found themselves as they attempt to juggle full-time jobs, daily English classes and families.

In neighborhoods like Flatbush and East Flatbush where a quarter of the heavily immigrant population live in poverty, Pierre says it’s difficult to manage even applying for a green card, which is the first step towards becoming a citizen. “An immigrant earning minimum wage would need to put aside all other needs and save gross earnings for five weeks. Impossible! The new fees for green cards and citizenship applications have put the dream of becoming legal residents out of reach for many New York City immigrants, especially those in Brooklyn.”

Defending the new citizenship requirements, Emilio Gonzales, the Director of USCIS, insists, “We found that the current naturalization exam lacks standardization and encourages applicants to memorize facts just to pass a test, but that doesn’t guarantee that they understand the meaning behind the questions. Our goal is to inspire immigrants to learn about the civic values of this nation so that after they take the oath of citizenship they will participate fully in our great democracy.” 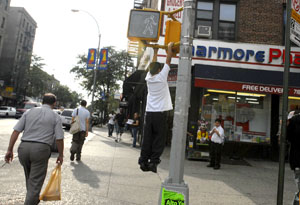 At a time when immigration is on the rise and free ESL classes are necessary for success, more and more adult literacy organizations are closing their doors or cutting their programs. Literacy classes offered at city colleges target upper-level ESL students and charge fees. Students with lower levels of English (and who are sometimes illiterate in their native languages) have fewer options. The Brooklyn Public Library and some Community Based Organizations (CBOs) offer free, low-level English classes. However, according to Pierre, “the number of available CBO classes has diminished considerably in the last two years. Currently, both the Brooklyn Public Library and CBOs have waiting lists that are so long they have really become dead-ends.” He adds that some organizations have had to close their doors due to lack of funding.

Camba has a waiting list of over 1,000 immigrants for free English classes—a number the organization couldn’t possibly serve in the near future. At this time last year, the waiting list was at only 400. Everyday, between five and fifteen immigrants arrive to put their names on the waiting list, and are told that it will be months before they will be able to attend English class. The need has become so great that many students are exited from ESL programs with only a basic proficiency in English in order to make way for new students.

New York State allocates about $74 million a year for adult literacy programs and ESL education. This may seem like a lot, but even if these funds were dispersed only within New York City (as opposed to the whole state), that would only amount to $24 per immigrant per year. According to Pierre, “This amount is inadequate and is just not enough to meet new challenges.” Pierre estimates that only three percent of immigrants in need of free ESL services receive them. “Some major changes need to take place very soon,” he says.

In May 2006, the US Senate voted—in a move that many consider to be largely symbolic—to designate English as the national language. The controversial Inhofe Proposal, put forth by Senator James Inhofe, R-Okla., instructs the federal government to, “Preserve and enhance the role of English as the national language of the United States of America.” The Senate later voted on a slightly watered-down alternative designating English as the “common and unifying” language of the United States.

Confusion surrounds the proposals. Critics fear that declaring English as the national language would discriminate against non-native English speakers and jeopardize bi-lingual services and education. The Inhofe proposal asserts that no one has “a right, entitlement or claim to have the government of the United States or any of its officials or representatives act, communicate, perform or provide services or provide materials in any language other than English.” Senator Harry Reid, D-Nev., accused the proposal of racism. “Everybody who speaks English with an accent knows they need to learn English just as fast as they can,” he said. “I think it’s directed basically to people who speak Spanish.” And skeptics of the proposals maintain that declaring English as the national language without accompanying such a measure with increased funding for ESL programs is simply hypocritical.

With inadequate state funding and diminishing free ESL options, many a would-be English speaker finds herself forced to navigate the complications of life in a foreign country in her native language or broken English.

“Why do you want to learn English and become a citizen?” I ask my students.

“Because you can’t do nothing in this country without it,” says Jean-Paul, eighteen and out of work.

“More money,” says Charlie who is forty and has four children and a wife to support.

“Because I hate working at McDonalds,” remarks Renaldo, who is in his thirties and has a wife and two children in Panama.

“So that my child have opportunities” says Marta, a single mother and night-shift janitor.

As Sadie, a Moroccan mother with very little formal education told me, “I want to learn English so I can help my daughter learn to read. But she reads better than me and when she speaks English, I can’t understand her.” English does not need to be declared the national or official language for Sadie to realize how far she has to go before reaching her goals.

How Can We Think of Art at a Time Like This?

Co-curated by Barbara Pollack and Anne Verhallen as a platform for the exchange of art and ideas at a time of crisis, How Can We Think of Art at a Time Like This? is an exhibition without walls, created almost overnight to respond to museum and galleries’ closures due to the COVID-19 pandemic, as well as a platform for free expression, inviting visitors to post responses on its Comments page.