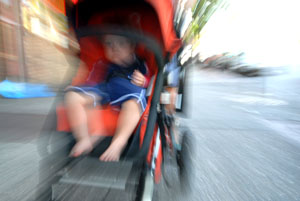 When hip, white, wholesome 20-to-30-something New Yorkers with good jobs want to breed, they buy a stroller and move to Park Slope, Brooklyn.

The stroller is key.

I had just moved here the day before, and while I’m white, passably hip and wholesome, and at one point had a good job, I was somewhat concerned that I had no stroller. No stroller, no kid and no compelling inner wash of hormones arousing me to buy a stroller or engender a kid to stroll around.

It was my first post-Manhattan morning, and I was sitting in the Tea Lounge café, a few blocks from my new apartment. There was a pretty young Israeli behind the counter. A gay couple spoke softly so as not to disturb those of us tapping away on our laptops or reading the paper. Several couches further in, two women in their early thirties were chatting, their six-year olds drawing with crayons. It was a far cry from the poly-verse freak scene I was used to in the East Village, but nice enough. I ordered coffee, got comfortable and got to work.

As the two gay men left, they held the door open for a woman with a stroller and kid in tow. I went to the bathroom. I noticed the diaper changing table. How thoughtful. I’d never seen one of those in a Manhattan bathroom. Maybe it was true what people said, that Brooklyn really was a more neighborly place. Returning to my seat, I maneuvered past another stroller, which had joined a cluster of several others in the middle of the cafe in a little stroller traffic jam, a tiny indoor stroller park.

I was trying to write again; U2 was playing on the stereo and an infant was crying in the far corner of the cafe. Another mother appeared at the door. This time there were no kindly gay gentlemen to open it for her, and on her own she couldn’t quite lean over enough to open the door and also push the stroller through. By my count, there were already six strollers in this not-large establishment. Now she was using the stroller like a battering ram. The kid had pulled in his feet and she pushed hard into the door. It opened a few inches, but then closed again from its own weight and the spring-tension in its hinges. She pulled back and regrouped for another ram at it. I considered getting up to help her, but figured that by the time I got over there, she was bound to have pummeled her way in.

Anyway, weren’t there enough damn strollers and kids and mothers with beatific, infinitely patient (“I’m exhausted but I’ve found the meaning of life”) faces in here already? I realized: I didn’t want to help her. “Back with ye, stroller-fiend!” A satanic-preacher-exorcist voice welled up within me. “Begone! Avert!” It became an invisible battle of wills: Her stroller battering ram against my demonic psychic powers. She slammed hard into the door, causing several nearby customers to finally turn around and take notice of her efforts. The door pivoted half-open, and she banged side-to-side through the doorway, into the café-sanctuary-cum-day care center, withering my psychic cone of telekinetic resistance.

The Talking Heads came on the stereo, and I was thinking, “Is this my beautiful new café-office? Is this my beautiful new neighborhood? How did I get here?” Why did I leave my tiny liver-spotted East Village sublet, and move to this lovely neighborhood of historic brownstones, tree-lined streets, and strollers? Could it be—myself childless at the age of 39—an unconscious impulse to rub my face in my own ambivalence? Was this neighborhood going to be my Buddha Demon? My own personal return of the repressed?

I’d been putting off the fatherhood decision my whole life. I was never one of those guys who knew he was going to have kids. It was always an open question for me. What I did know for certain, however, was that I didn’t want to have children too early—and then blame them for the unlived life I never got to live. I always figured: why not have my life first and then have kids?

But with each thing you experience, leading to other things you want to experience, it becomes harder and harder to work in enough living before the close of your supposed baby-making years. You can try to beat the clock by living life as furiously as possible: cranking through travel fantasies, fringe lifestyles, multiple careers, extreme sports and designer drugs and gorging yourself on liquor and sex as fast and as hard as you can. I mean, how else are you going to get over yourself enough to really be there for your kids when it counts? In the end, though, the logic doesn’t really work out, because there I was: 39, surrounded by other people’s kids and still far from over myself.

I watched the stroller-fiend wheel her way through the café. She parked her stroller in the tiny stroller car-park and found a seat amongst the congregation of those-who-push-strollers, by now spread out across three sofas, half a dozen chairs and an assortment of knee-high coffee tables.

I could almost taste the fertility in the air. I was thinking there should be health warnings on the street signs leading into the neighborhood: “The Surgeon General has determined that living in Park Slope increases your chances of contracting pregnancy.” Maybe I should only have sex in Manhattan. Or if I have it here, wear two condoms. Or why not just give up and have a kid? Buy a god-damned stroller. Get happy. Because as I scanned from motherly face to motherly face (somehow there was only one father here), even my evil, par-boiled brain could tell that these women were happy. Dazed and a bit on edge, yes, but happy.

How could they be so perfectly entertained by their kids? These were not suburban Republicans in pink sweat pants with empowerment lobotomies. These were progressive, intelligent, cultured, urban women. How were they not bored pushing strollers and making sandwiches and hanging out with three-year olds all day? And why couldn’t I be not bored like this, too? Clearly, there was something here I wasn’t getting. And, probably, I was not going to get it until I had a stroller of my own. One with my own heart-melting, endlessly surprising, little universe to strap in and stroll around and batter down cafe doors with. Until then, however, I still had the whole rest of my unlived life to live.

Boyd is the co-founder of Billionaires for Bush. His books include Daily Afflictions.

Nina Mdivani speaks to those recently displaced by the invasion of Ukraine.