Masked Villains You Love to Hate

The symbiosis between film and comics is well-known and simple to appreciate. Early episodic serials were often taken directly from the “funny pages” as theaters expanded their double features with two-reeler cliffhangers starring the likes of Batman, Dick Tracy, Captain Marvel, and Flash Gordon. In the United States the majority of these films were morality plays where the forces of good triumph over brilliant but ultimately weaker evil. Good wins thanks to a combination of brains and brawn, two characteristics that the ominous villain never has quite enough of to compete. Stories like these are as old as humankind itself.

But if during the Golden Age of comics it would be unheard of for Superman to fail, by the noir era of the postwar 1940s good sometimes took a beating. And in Europe with its fallen empires, the bad guys were often a better, and classier, bunch than the heroes.

One of the earliest examples is the film serial Fantômas (France, 1913). The exploits of a sadistic masked criminal, the Fantômas stories, originally written by Marcell Allain and Pierre Souvestre in 1892, became a series of novels that have been adapted as films, a television series, and comic books. In the 1960s, Fantômas morphed into an anti-superhero, clad in a skintight blue rubber mask and armed with an arsenal of James Bondian weaponry. Starring the former swashbuckling actor Jean Marais (Jean Cocteau’s star and lover) as the archvillain and featuring the comedic actor Louis de Funès as a Clouseau-like French policeman, the films ( Fantômas, Fantômas se Déchaîne, Fantômas contre Scotland Yard ) are 1960s Batman-era pop art. Available as a DVD boxed set (Gaumont DVD; Region 2 PAL, French language only, no subtitles, sadly), the films feature dazzling eye candy, especially in Fantômas’ underground lair. They owe more to the comic book versions than to the original post-Gothic novels. A more in-depth study can be found at www.fantomas-lives.com/fanto4j.htm.

In 1962, the Fantômas character was recreated in Italy as Diabolik, in a digest-sized comic book that’s still reprinted and sold at Italian newsstands today. With its lurid depiction of violence and sex, the comic depicts the lycra-masked Diabolik, abetted by his lover Eva Kant, as the ultimate master criminal, ripping off the law and other lawbreakers with equal aplomb. 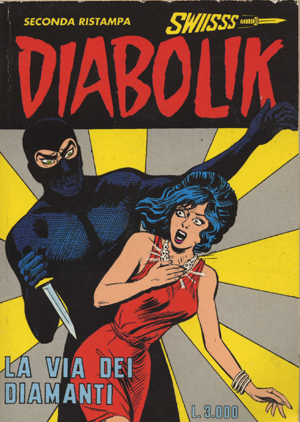 Diabolik stars in this Italian fumetto.

Mario Bava’s 1968 film adaptation, Danger: Diabolik, is one of the most stylized films ever produced, from the saturated Technicolor to Ennio Morricone’s devious mod soundtrack. Curiously, it was a box-office dud on its release and was screened mostly as the B picture at drive-ins and grindhouses, despite being the follow-up to producer Dino DeLaurentis’ highly sex-cessful Barbarella. But Danger: Diabolik is a Pop Art masterpiece that has only gotten better with age. Like Fantômas, Diabolik has an underground sanctuary as well, a spectacular set that mixes the Bond look with Bava’s distinctive visual style. On the beautifully restored, wide-screen edition DVD (Paramount Films), infamous scenes like the one with stars John Philip Law and Marissa Mell making love on a round rotating bed, covered with millions of dollars, look amazing.

As a successful comic book, Diabolik was certain to be ripped off, and soon there was Kriminal, dressed in a macabre skin-tight skeleton costume and mask. First seen in a digest-sized comic and fumetti (with lots more nudity and violence), Kriminal appeared in various European editions under the guises of Killing, Kilink, Satanik or Sadistik. It’s interesting to note that these magazines also spread to South America and Mexico, where outrageously costumed masked wrestlers defined superhero films and comics in the 1950s.

Killing, or rather Kilink, underwent his most twisted, low-budget metamorphosis in Turkey, which by the late 1960s was a bastion of copyright violation. Homegrown Turkish cinema barely existed before this era, and in fact it pretty much ceased to exist after the 1970s. Much has been written about the country’s infamous rip-off films, like the Turkish Star Wars, Star Trek, Exorcist, and E.T. that have been overwhelming fans with amazement and spasmodic laughter for well over a decade now.

Beyond these copies of Western blockbusters, most Turkish films were Grade-B comic-book-styled flix, often starring Cüneyt Arkin, a muscular Charles Bronson type who would be cast in Hercules-style roles as a superhero, supercop, or all-around avenger. Many of these films reached cult status due to regular showings on Turkish television and their availability on videocassette during the 1980s. Unfortunately, the original prints and negatives of most of these films have been destroyed. But fans and preservationists have been tracking down tapes and making digital masters, often from low-quality dubs.

The Kilink films are an outrageous example of both the masked villain and the freewheeling Turkish comic-book film style. Kilink in Istanbul, Kilink vs. Superman and Kilink Strip and Kill resemble 1940s Saturday matinee serials, except for the addition of scantily clad women and gory violence. The music was all stolen from other films, pulled directly off soundtrack LPs—Italian ones, especially by Ennio Morricone, were popular, as were American blaxploitation scores. Editing was often haphazard and effects budgets were nonexistent.

But there’s something about these films…they were being made against all odds, as cheaply as possible, because someone had the compulsion to make them, whether because they had a story to tell or it was just a hopeful way of making some money between dictatorships. The plots are of the simplistic good guy/bad guy scenario, but you end up rooting for the bad guy in the Kilink films, because the bad guy is much cooler, and sometimes you just want bad to overcome good. Because oftentimes, good is just not good enough.

Getting these films onto DVD has been an arduous task for the fine Greek gentleman who runs Onar Films [www.onarfilms.com]. Finding the films was incredibly difficult (the last third of Kilink vs. Superman doesn’t exist anymore, so the ending was put together using still photos and narration), but he’s managed to pull it all together and add extras such as interviews with directors, fans, and the original stars (although one unfortunate died the day before an interview was scheduled to be filmed). The original comic books and fumettis have been revived and reprinted for a new audience: the Go Sadistik website [www.gosadistik.com] is a wellspring of info about and merchandise inspired by the various masked fiends. There’s even a free comic book download available.

Though many of these DVDs are in non-North American formats, region-free DVD players are readily available. It’s also worth knowing that most of the dirt-cheap players sold by U.S. chain stores can be easily recoded to region-free playing. Google “region free dvd hacks” and find the instructions on how to recode yours.

It takes a nation of millions to hold back Brother Cleve.

For its 2018 edition, the Reykjavík International Film Festival presented almost 100 feature films, nearly as many shorts, and enough extra-cinematic activities to make one feel guilty for not spending more time in the dark of the theater.