Bright-eyed, unkempt Walt (Tim Streeter) clerks in a store in a seedy section of downtown Portland. He’s infatuated with Johnny (Doug Cooeyate), a teenage Mexican idler who train-hopped his way to the Pacific Northwest from Los Angeles. The year is 1984. Luscious Johnny shines amidst the parade of winos, homeless, infirm, and insane who frequent Walt’s workplace. As he vends coffee, cigarettes and nitrate, Walt muses, “All I wanna do is caress him…” 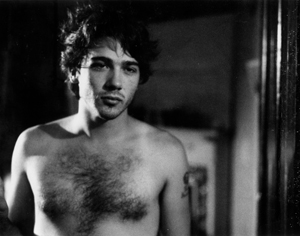 Johnny speaks no English and distrusts the “faggot.” He is, however, willing to hang out if free food, beer and car trips are involved. And while Johnny won’t sleep with Walt, who initially attempts to pay for him, his friend Roberto (Ray Monge) sometimes gives it up. Walt contents himself with this arrangement but fantasizes his love will someday be reciprocated. He speaks Spanish like the worst of gringos and teaches the boys to drive. He lends them a hand in times of trouble. Walt insists he understands that “Just because I see someone attractive like Johnny doesn’t mean I should be able to have him, to buy him or whatever…” We don’t quite believe this assurance, and neither does he.

Van Sant’s adaptation marries the Beat of Curtis’ writing to rich, rough-and-tumble, black-and-white imagery. The graininess of his celluloid—catnip for the cinephiles in the audience—echoes the grit of the rainy city. The chiaroscuro affected by his low-key lighting melds with the occasional oblique camera angle to quote film noir. Less frequent images of the open road and countryside capture a subtle range of grays, offsetting the film’s urban sequences. Van Sant’s signature shot—clouds churning above a flat landscape—was first scrawled here.

No mere “first feature,” Mala Noche has a low-budget visual decadence that alone makes it worth seeing. Streeter’s amateurish performance as Walt ratchets the film significantly closer to must-see standing. Streeter does Walt’s inner monologue best, striking a perfect balance between (self-serving) earnestness and desperation. As Walt cranes his neck from his car window in hopes of spotting one of his amigos, his voice intones, “Fuck it, do I need him that badly? Am I that desperate? Of course I am.” Matter-of-fact delivery renders the self-deprecating gesture more hilarious than pathetic. Or is our narrator being ironic? Much of Mala Noche’s interest lies in Walt’s apparent disingenuousness, courtesy of Streeter’s elusive tone.

Perhaps the most beautiful scene in Mala Noche is the one that captures a wild nighttime car ride. Rapid cuts connect high-contrast close-ups of Walt’s terrified countenance and the vehicle’s speedometer. The voiceover turns rhythmic—spoken word-esque—as Walt reflects on Johnny’s insanity behind the wheel. Van Sant’s fast-paced formalism mirrors the cadence of Curtis’ writing, resulting in an edgy, artful interlude.

Those acquainted with Van Sant’s oeuvre (especially his 1991 My Own Private Idaho and the more recent Elephant) will salivate over this Criterion release. Special features include an interview with the director, a storyboard gallery, and a quirky 1997 documentary on Walt Curtis. Are you getting antsy waiting for Paranoid Park? Familiar yet surprising, Mala Noche will tide you over.

Sarah Kessler is currently completing her Master's in English at the University of Wisconsin. She will migrate to sunny Los Angeles after her defense.

Kim Juwon: The night, the past recalls the past

by Kjell Askildsen, translated from the Norwegian by Seán Kinsella

Kjell Askildsen published his first collection of stories in 1953. This month, Archipelago Books publishes Everything Like Before, a career-spanning collection from the 91-year-old Norwegian writer. Themes remain remarkably consistent throughout the work: absence, family, memory, and uncertainty. The sensory experience reminds me most of a long still in a Tarkovsky film, maybe a few photographs submerged in a murky stream. The story selected here, “Mardon’s Night,” exemplifies the movement of all relationships, the ebb and flow in the very act of relating, and how our interpretation of another’s subjectivity moves gently, easing its way to understanding. The result is a masterful representation of consciousness.