An Interview with Miwa Nishikawa

Although she’s made just two feature films, director Miwa Nishikawa has proved a singular voice in contemporary Japanese cinema. Nishikawa broke into film as an assistant director under the tutelage of acclaimed auteur Hirokazu Kore-eda (Afterlife, Nobody Knows). Kore-eda served as producer for Nishikawa’s first film, Wild Berries, using a script Nishikawa wrote about a family falling apart. Nishikawa’s second feature, Sway, is a stunning, modern meditation on repressed emotions, also examined through a story of a troubled family. Between film projects Nishikawa also managed to turn Sway into a successful novel.

Sway made its way to Cannes in 2006 and was one of the featured films at Japan Society’s Japan Cuts film festival this summer. Nishikawa attended the festival and spoke about the state of the Japanese film industry as well as the travails of independent filmmaking.

Wilentz (Rail): I understand that both of your features came from nightmares. Could you please elaborate the process of how each film developed from nightmare to screenplay?

Nishikawa: In both cases, the moment I awakened from the nightmare I knew that it would become a film. I was certain of that. I became aware of ugly sides to myself, of ugly emotions that I have inside myself. Upon awakening I was able to immediately, objectively see kind of a darker self. Then I thought, well, maybe these darker selves aren’t just about me but have a kind of universality, and other people also have these darker emotions. So that’s something that both the films and nightmares shared. I think that the process takes time, but dreams are really like a collection of metaphors, and with film the question becomes how to turn that [collection of metaphors] into a story. It’s a question that arose, for instance, in the dream that led to Sway. It was me and a male friend, but I thought it would be more compelling if the two characters had a deeper bond, so I turned them into brothers. But the process of turning a metaphor into any satisfying entertainment—the screenplay writing—takes a year or two. 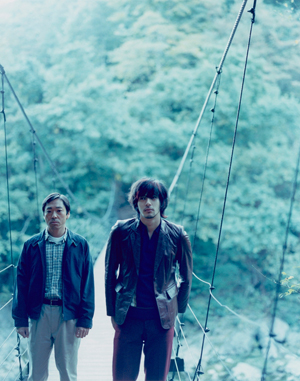 A waterfall became a bridge when Nishikawa turned a nightmare into her film Sway, featuring Teruyuki Kagazwa and Jo Odagiri. © Celluloid Dreams

Rail: What was the dream?

Nishikawa: It was me and my close male friend, whom I witnessed from a secret position, pushing a woman into a waterfall. Whether it was a murder or an accident was extremely ambiguous.

Rail: The ideas for your films come from nightmares, yet they are rendered in a naturalistic style. You mentioned metaphors. In Sway, one of the most powerful metaphors is the rope bridge over the gorge. It’s dreamlike without being surreal.

Nishikawa: In the dream it had actually been a waterfall, but by transforming it into a bridge, and a swaying bridge at that, I wanted to represent the uncertainty and fluidity of human emotions, and also the connections and the ambiguities in human connections. Even though it’s based on my dream, I tried to transform it into something with its own specific metaphoric weight.

Rail: Could you talk more about how you perceive the relationship between dream and film?

Nishikawa: Certainly not all films come from dreams, but the thing about dreams is that after you wake up from one, you can see yourself in the dream objectively, and I think that actually you can also accomplish this in waking life. You can look back a year after you’ve been in a particular situation and be objective about what your emotions were like then. So even though it’s based on a dream, the details come from my own life and personal experiences. Of course, with film you can manipulate time and space, which you can’t do in reality.

Rail: You studied photography while you were a literature major at college. What brought you to that?

Nishikawa: As a student I didn’t have anything to do with filmmaking. Part of it was that the kinds of funds you can gather as a student are so limited, and also you have to work in a team. I was actually interested in the visual world and I wanted to try making high-quality work on my own. But what I learned making photographs is that you don’t rely at all on words and that it’s its own unique visual expression. But because I was also influenced by literature, I wanted to incorporate words as well, for a total artistic vision.

Nishikawa: I’m not particularly conscious of Ozu as I make my films, but apparently the Japanese family that’s visible in his films looks similar to mine to Westerners. Although there are vestiges of the family structure and the style of houses that remain, society has changed so rapidly since the days of Ozu that the family itself has had to transform. I think since the days of Ozu the family and the society in general have gotten much more twisted and bent out of shape, and families themselves have become much more complicated. I certainly like Ozu’s films but there’s a central warmth and harmony in the Ozu families that I think is gone from Japanese families now. I think the beauty that Ozu created is long past us.

Rail: Your films are obviously very personal, but to a certain extent they are acute social commentaries. You’re talking about the sacred family unit as being dysfunctional, not working anymore, about all these ideas being falsitudes.

Nishikawa: My goal is not just to decry the difficult reality, but to try to give the audience an opportunity to experience and look back and reflect on that transforming family and what’s happening to their own lives.

Rail: In Sway there’s a kind of quiet catharsis. It seems like that’s what you’re trying to achieve.

Nishikawa: Although the theme is two siblings, it doesn’t just pertain to brothers or even to a family but to fundamental human relations. I mean, it was based on a dream about my friend and me. So if two people become close, inevitably there’s jealousy and love and hate, and that’s what I’m kind of getting at.

Rail: An interesting structural aspect of both the films is the pivotal role of death. In Wild Berries it’s a funeral where the father’s lies are exposed, and the funeral is also the very thing the outcast brother exploits to survive. In Sway the mother’s memorial reunites the dysfunctional family, which incites the major drama of the film. Death represents the ultimate failure of the family.

Nishikawa: I think that many people have things but they don’t realize how important they are or what they mean until after they’re lost. They just don’t know until they’re gone. And so the funeral is critical to both films. I think death provides rituals where people can be reunited, whether through funerals or memorial services, and in my own house—I come from a very old family—I’ve seen the kind of drama that reunions can provoke. You get to see aspects of your family that you never saw before. I’ve certainly incorporated many of my own experiences into my films.

Rail: What was the dream that inspired Wild Berries?

Nishikawa: My parents actually began to keep a very cute dog that brought them back together again, but in the dream I saw on the TV news that this dog was killing people everywhere, so despite the fact that it had brought my family back together I felt I should surrender the dog to the pound because it was a killer.

Rail: It’s interesting, because Wild Berries has been described as a black comedy and while the subject matter is very serious, in a certain sense it is a comedy of errors. There is more absurdity there compared to Sway, which is a little more austere.

Nishikawa: I think the more serious the theme, the more important laughter is. I wanted to try to incorporate more comedic elements into Sway but the moment I settled on the death of a childhood friend I realized there wasn’t much room for comedy. So instead I used the element of mystery to sustain the audience’s interest. I am looking forward to going back to some more comedic elements in the next film.

Rail: Speaking of, what is your next project?

Nishikawa: It’s a story about a man who is fake. He has a fake identity.

Rail: Jo Odagiri (the star of Sway) and others have made telling comments indicating that your attractive and demure appearance belies the darker aspects of your screenplays, and also your ability to deftly illuminate the deep emotions of two male siblings in Sway.

Nishikawa: I didn’t particularly feel like I was making a story about men. I think all of us have masculine and feminine elements within us. I live my life as a woman but it was like I was exploding those aspects of me that are male onto the screen. It’s been many years since the collapse of the Japanese studio system and the industry is gradually upgrading itself, but it remains very much an undeveloped business. Talking to Western filmmakers and producers, I would think there are many more ways to have a more mature industry. I myself make low-budget films out of necessity, but I and my crew tend to sacrifice our lives for our filmmaking, so I think there needs to be systematic changes in the industry in order to inspire more young people to want to make movies.

Cannes 2021: Tomorrow Now and Then

Absence makes the heart grow fond, but does that apply to Cannes? Returning to this biggest, most stressful of film festivals after a year’s enforced absence due to the ongoing pandemic was strangely ambivalent—the pleasure and privilege of finally seeing new films on the big screen tempered by the worry and uncertainty of the current situation.