Charles Burnett shot his first film, Killer of Sheep, during the early seventies in the Watts section of LA, using actors and crew members from the community and a budget under $10,000. He released it as his MFA thesis at UCLA film school in 1977. Not anticipating a theatrical screening, Burnett chose a soundtrack that included songs by Scott Joplin, Louis Armstrong, Rachmaninoff, Earth, Wind, and Fire and many others, none of which he’d purchased the rights for. It took thirty years and $150,000 before the film could be seen in a theater or on home video.

In the meantime, the Library of Congress declared Killer of Sheep a national treasure; the National Film Registry included it as one of their first 50 inductees; and the National Society of Film Critics recently chose it as one of the 100 essential films of all time. With the notable exception of Janet Maslin at The New York Times, who found the film too artily detached from its subject, critics have tended to hail Killer of Sheep a masterpiece.

At last Milestone Film and Video released Killer of Sheep on a restored 35mm print earlier this year, and on Nov. 14 a two-disc DVD set, including Burnett’s 1983 My Brother’s Wedding and four short films, will become available through New Yorker Films. 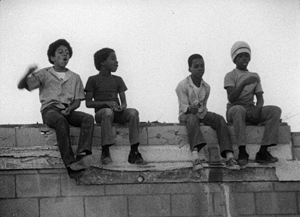 Innocence vs. experience: The boys in Burnett’s Killer of Sheep mostly do what comes naturally. © 2007 Milestone Films

Burnett was born in 1944 in Vicksburg, Mississippi, and his family moved to Watts soon after, where a large number of blacks from Mississippi, Alabama, and Louisiana had settled. Many local children were sent back to the South to be baptized and “saved” before they reached adolescence. In Warming by the Devil’s Fire, Burnett’s semi-autobiographical documentary in Martin Scorsese’s film series The Blues (not included in the New Yorker DVD set), a young boy on his way to get saved is intercepted by his renegade uncle, a ladies’ man and blues connoisseur. The boy spends the next several months intentionally exposed to sin, the heart of which lies in blues music, before he is retrieved by another uncle, a minister. Although partly fictional, the film contains Burnett’s own youthful impressions of the blues as a wrongly stigmatized art form. As a boy, Burnett was exposed to records by Son House, W.C. Handy, Blind Lemon Jefferson, and Ma Rainey, as well as a way of life in Watts that frequently ran contrary to the gospel. Killer of Sheep reveals these influences in its sympathy for the devil, even as it also sympathizes with the gospel’s effort to cast the devil out.

An intuitive grasp of the blues sensibility may be what allows Charles Burnett to portray his characters so lovingly, whether they sin or not. He applauds the morally righteous, while reserving a tenderness for men who laze around, steal TVs, or even plot murders.

In this Burnett is is a lot like Anton Chekhov, a writer whom Burnett has read and in whom writer Cornel West sees the spirit of the blues embodied. “Chekhov, an agnostic, has a very Christian sensibility in that he wants to love people against the odds,” West said in a 2004 interview. “He knows that when we confront mortality, death, and history we can have a sense of resentment, and he says we must rise above it, learn how to live a life of compassion, regardless of how dark and difficult things are.”

Burnett’s art, like Chekhov’s, is most often rooted in everyday banalities. Nothing much happens in Chekhov’s stories, as far as action or enervating plot twists, just as little happens in Killer of Sheep, especially compared to the violence of early seventies blaxploitation films. No guns go off in either Killer of Sheep or My Brother’s Wedding. The most distinct plotline in Killer of Sheep is an almost slapstick struggle to fix a car.

Much of what happens in Killer of Sheep is a meditation—primarily by the main character, Stan (Henry Gayle Sanders), a depressed, insomniac slaughterhouse worker—on the futility of existence. The deep grooves in Stan’s forehead, and the flak he takes from women for never smiling, attest to his conviction that he’s not who he should be, or could be. Similarly, Chekhov’s heroes, or anti-heroes, though often outwardly stoic or withdrawn, are burning up with contempt for their own wasted potential.

And yet Stan is very much alive, more so than the men around him, the majority of whom are jobless, handsome, and rowdy as hell. Despite his sadness, Stan carries on with a kind of boundless and instinctive empathy for the downtrodden. Indeed, it often seems his extreme humanism is responsible for his disappointment.

Excluding Stan and his unnamed wife (Kaycee Moore), who also shows a talent for dramatic reflection, the acting ranges from inspired to so-bad-it’s-good. The men all seem boyishly game, excited to appear on screen, while the women—exhausted, overweight, arms crossed on the porch—seem unconvinced that this film isn’t just another one of their men’s harebrained money-making schemes. In one of the most jarring scenes, Moore berates two men, Smoke and Scooter, for trying to recruit her husband as an accomplice to murder. Her speech is perfectly real, mainly because it was improvised, as if the film finally gave her an opportunity to tell these particular guys off. Smoke evades the attack by pointing out Stan’s lowly condition and saying, “You can’t live if you’re afraid of dying!” This silences her. The film’s unspoken, or unconscious, response is that it’s precisely Stan’s awareness of death that makes him so viscerally alive.

Children play a prominent part in the film and are spared the adult conflict between acting and being themselves insofar as they don’t quite seem to understand what acting is. You can imagine the stage directions “Just do what you guys usually do” not being a problem for the boys. They wrestle, joke around, comb their hair, yell at girls. They chuck rocks at passing trains, buildings, signs, one another, not out of hostility but rather as a way of feeling out the world around them, sounding the boundaries of their freedom. The only artificial moments occur when the girls are on screen. They invariably look awkward in their impersonations of women: hanging the laundry, castigating others for missing school, even pacifying the men, as when Stan’s daughter massages his shoulders—something too intimate for his sexually frustrated wife to do. But their stilted behavior, intentional or not, serves its own purpose: little girls shouldn’t be asked to play adults in films, just as they shouldn’t in life.

Killer of Sheep contains no teenagers, which divides the world cleanly into childhood and adulthood; that is,
innocence and experience. A visual comparison is made between sheep and the kids, who run in small herds, stand on their heads like inverted sheep on a meat hook, and even wear little sheep’s wool coats (as Stan’s daughter does near the end). Stan is the apocalyptic shepherd, the one who slays the lambs, although the true killer of sheep could be an America that forces its poor to sacrifice the innocent, and their own innocence in the process.

The metaphor is intentionally elusive. Where the children and adults overlap is in their struggle for dreams: the kids (or at least the boys) blindly act them out in train yards, while Stan’s wife retreats into girlhood memories of the South, and Stan literally counts sheep all day. In light of this desire for escape the absence of teens seems ominous, as if the prospect of an adulthood in Watts was too much for them to bear.

How to Make Ambitious Theater on a Budget, According to Clubbed Thumb’s Maria Striar

As Summerworks celebrates its 25th anniversary, Clubbed Thumb’s founder and producing artistic director looks back on its history that’s evolved from scrappy to sterling.

Trickling Up: The Theater Community Uplifts its Own

Theaters have been shuttered for a record number of days: with Broadway venues currently closed through at least June 7—and many Off-Broadway theaters following suit—we are quickly approaching our 100th day without communing together. It has had a devastating effect on the industry, and none have felt this seismic shift more acutely than its artists.