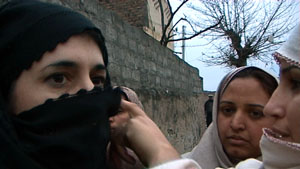 Pakistani women cover Jen properly with a scarf while they walk in public down a small street on their way to a grassroots meeting of rural Pakistani women. Photo provided by Zohe Films.

“I had to keep filming to figure out this modern crazy life,” Jennifer Fox says at the beginning of Flying: Confessions of a Free Woman. In 2002, she was at a crossroads and needed to make a different life for herself. The result is this eerily convoluted but totally engrossing six-hour epic. It starts with grainy childhood clips of Fox as a little girl in a two-seater airplane with her father. As she states in her adult voice, “I wanted to be like my father, I wanted to be free,” because that was where all the power lay. Power certainly did not reside with her mother, who may have ruled the roost along with the director’s maiden aunt and grandmother, but underneath she frothily seethed. Born into the first generation of women who could make not just money but also the rules, Fox explores over a period of almost four years and 1,600 hours of film her own relationship woes: exotic married lover vs. dependable boyfriend, motherhood vs. childlessness, and what it means to be a privileged white, middle-class, first-world female filmmaker who goes jetting off to 17 countries. She contrasts her position with the larger woes of the world, including cancer, female genital mutilation (FGM), male dominance through purdah and the big one, death.

Fox walks with us and her camera into the drugstore, buys a home pregnancy test, shows the instructions, reveals the results (pregnant!) and breaks down weeping. She is scared and elated and doesn’t know what to do. If you use a camera for four years to figure out your own and your girlfriends’ lives you must either touch something new and unique, or give in to platitudes. The true relevance of this film is that it shows there are no longer any real platitudes. What is true and unique is that Fox has to go it alone and learn what any real explorer knows: the way is deeply uncharted.

Fox takes us into areas I personally have never seen a filmmaker go, such as her own ob/gyn exam, where she films her doctor pointing to the sonogram of her non-viable, weakened fetus, soon to be D&C’ed and ripped from her body. Fox is so gutsy with her camera that if she hadn’t been anesthetized she probably would have filmed her doctor performing the ghastly procedure.

In Flying, Fox traverses through a large cast of characters, a veritable “we are the world” of women, while she figures out her own life. She speaks to and with the women by passing the camera back and forth. A Shoshone Indian endures a horrific custody battle, and a South African sexually abused divorcée wonders if she can ever manage a relationship again. There is a Soweto single mother who survives economically only by living inside a village matriarchy, an Egyptian journalist co-parenting within a happy marriage and a German cancer patient whose doctor unexpectedly falls deeply in love with her. We meet an East Indian grassroots organizer, a Russian adulteress, a Cambodian survivor of Pol Pot running a shelter for kidnapped sex workers, a Pakistani woman who refuses to marry and must face the consequences, a Somali exile who lives in London and fights the practice of female genital mutilation; and a Bosnian war refugee. Sound dizzying? It is, and all these confessions and revelations are as cloying as a lavender sachet, or as riveting as an unexpected secret eavesdropped conversation.

“Someday I will meet the one and get married and then my life will begin,” one of the women muses. This is the subtext of Fox’s film as it explores the sad truth that women muddle though life defining themselves by their relationships. The question raised again and again but not answered is: why don’t men feel this way? Never before have women had so many options, or been so free, but as one woman puts it, “The older we get, the more confusing it gets.” 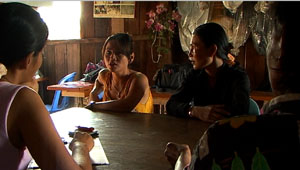 CPU Meeting: Sichan, left, an advocate at the Cambodian Prostitutes Union meets with a prostitute who is trying to get advice and protection from a violent gang of men who target her at the brothel where she works. The police think she is crazy. Sichan warns her about going to the police because they are swayed by bribery. Photo provided by Zohe Films.

Having previously been warned by one of her friends, “Do you think no one would get hurt?” Fox breaks up with her married lover when his wife finds out about their affair and immediately turns the camera on herself miserably wallowing in a steaming bubble bath, weeping. When her grandmother is dying, her every breath a death rattle, Fox films it. When she tries to get pregnant using fertility treatments, she films the injections going right through the center of her belly. She films her lovers in bed; she films them as they wake up and get dressed. She films herself while she inevitably boards yet another airplane to fly halfway around the world to ask Indian women if they know how to masturbate. Giggling hysterically, they ask if she knows how it’s really done.

What saves this work from becoming a mere reality TV show is the powerful humanity behind each woman’s (and by inference, each man’s) plight, and the skillful editorial decisions of how to present that plight. No one emerges unscathed from the battle of the sexes. Fox also turns the camera on her own family, backing down at each critical impasse until her mother reveals something Jennifer never knew: the woman is deaf in one ear. How could Fox know so much about women globally, and so little about what went on in her own backyard?

Flying is post feminist, in that the freedom that women fought so valiantly to achieve was granted, and then, like a Pandora’s Box, whipped up a whole new set of woes. Now that at least some Western women can choose how to live their lives, where does this put them in relation to women who are not so uniquely blessed? Or in relation to their own aging and mortality? This is where the film moves from indulgence to profundity. Most of the world’s women can’t even imagine the choices Jennifer has, and they go out of the way to let her know it, providing a sobering and convincing reality check. The film delves into those 17 lives by examining abuse, abortion, activism, adoption, AIDS, aging, career, creativity, death, divorce, disabilities, family, feminism, freedom, FGM, homosexuality, illness, identity, love, marriage, motherhood, pregnancy, sexuality, spirituality and war. That’s a huge undertaking for anyone, much less one lone woman with a hand-held camera.