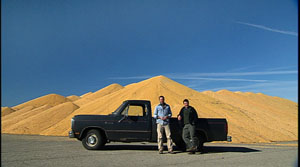 Ian Cheney and Curt Ellis at a pile of corn near Iowa. Photos provided by Mosaic Films Incorporated.

King Corn, a new documentary that premieres at Cinema Village on October 12th, cleverly and entertainingly engages the topic of corn, the dominant crop in U.S. agribusiness and also an ingredient central to the processed foods that plague American society. Aaron Woolf, the doc’s producer/director, and co-producers Ian Cheney and Curt Ellis serve as guides (and become small-scale corn farmers) in the film. Woolf’s previous films focus on subjects including human trafficking and Cuban baseball. The Rail’s Williams Cole recently talked to him about the plague of corn.

Williams Cole (Rail): Where does corn currently fit into the American diet?

Aaron Woolf: In the last thirty years or so, corn has become the most ubiquitous component of most processed foods—the average supermarket now has more than 5,000 products made with corn. But what I think is even more remarkable is that fast food is also essentially made of corn, even though you don’t see any of it on your plate. Today’s typical McDonald’s meal is—as Michael Pollan has said—almost entirely some transfiguration of corn. That burger is made from corn-fed beef, the French fries are likely as not fried in corn oil, and the soda’s main ingredient is high-fructose corn syrup.

Rail: When did corn syrup become so prevalent?

Woolf: High-fructose corn syrup was invented in Japan in the late 1960s but really took off in America in the 1970s. The reason why is simple: we completely re-jiggered the farm subsidy system in a way that encouraged farmers to start producing massive amounts of corn whether or not the market demanded it. The wet mills that were built in the U.S. essentially were producing high-fructose corn syrup as a way to get rid of the stuff–but the result was that it came to replace table sugar in many foods. Since it was cheaper than sugar, the sweetener became incorporated in many new products and things like soda then started to come in larger and larger servings. It wasn’t long before Americans began to get a lot more calories in their diet. The food industry had long been looking for a cheap sugar substitute and now they had one. But it was cheap only because the taxpayers subsidized its production.

Rail: How has it affected Americans’ health?

Woolf: Of course, it’s impossible to say that one single factor has been solely responsible for the current epidemics of obesity and diabetes. Yes, we consume more calories, but we also exercise much less in general. When we try to name major contributors to childhood obesity, I think PlayStation and XBox and those kinds of things probably have been as important as the foods we eat. But the point is that we don’t subsidize PlayStation. We now have a policy in this country that guarantees the massive production of cheap but nutritionally bereft foods primarily because of the way we encourage the chronic overproduction of corn. 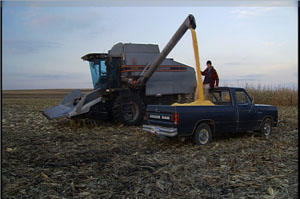 Curt Ellis, in combine, and Ian Cheney, in truck, harvest their acre.

Rail: What is the corn-petroleum connection?

Wolf: The industrial food system depends massively on fossil fuels. It is an oft-quoted but true fact that the average bite of food now travels 1,500 miles from farm to plate. That means that whatever it is you’re eating these days in America, you’re chasing it down with a big glass of diesel. And farming itself requires a lot of fossil fuel—from the stuff that powers the equipment to the natural gas that we use to crack atmospheric nitrogen to make fertilizer. Corn is a particularly rapacious plant and when we plant a lot of corn we have to put a lot of fertilizers back in the soil, usually in the form of anhydrous ammonia produced with natural gas. It’s one of the things we really need to keep in mind when we look to corn ethanol as a solution to our fossil-fuel dependency. It takes a lot of fossil fuel to make corn into ethanol!

Rail: How has the role of corn changed over time?

Woolf: Corn was the staple crop of the New World peoples and Columbus is said to have told Queen Isabella that in corn he had found something more valuable than gold. But over the years as we in the U.S. increasingly selected and farmed for productivity—instead of nutrition—when breeding corn, we began to change the nature of the crop. What we made eventually is an extraordinarily productive crop—we can now get something like 10,000 pounds of food off of a single acre—but it is a now a crop that has far less nutritional value than the plants that Columbus first found here.

Rail: So, what do you want people to walk away with after they see King Corn?

Woolf: I would hope that people will come away with a bit more comprehension of the system that produces most of the food consumed in America but also realize that we have a lot of power to confront that system. We can vote with our dollars by choosing to buy locally and sustainably produced food—but we can also vote with our votes. The 2007 Farm Bill is now in committee in the U.S. Senate and due for a vote on the floor this month. The House has already passed a version of the bill that essentially keep the current policy in place. And right now—as one commentator says in King Corn—“We fund the Happy Meals but not the healthy ones.”

Go to www.kingcorn.net for additional information and dates of screenings.