Review of Cathy Wilkerson, Flying Close to the Sun: My Life as a Weatherman (Seven Stories Press, 2007) 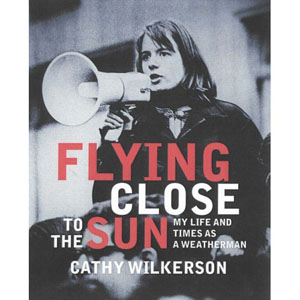 An architectural oddity stands out amidst the landmark homes of Greenwich Village: at 18 West 11th Street, the front door is recessed at an angle, the bay window a jutting, diagonal wedge of brick and glass. Distinctively nineteen- rather than eighteen-eighties in design, it is where prominent political activist and Weatherman leader Cathy Wilkerson found grisly realization of the radical catchphrase “Bring the War Home.” She didn’t mean it to be this close—it was her dad’s house that blew up on the morning of March 6, 1970 with her and four others inside.

Wilkerson lived to tell this tale and many more in her fascinating memoir Flying Close to the Sun. A sweeping story, it eloquently details the motives and miscalculations that, however flawed, aimed to start a revolution. Readers will be struck by her candor—she is unapologetic of her politics, yet regrets having replicated the violence of Kissinger and Nixon in the name of positive change. (The Weather Underground’s bombing campaign hit symbolic targets nationwide, including New York City’s Police headquarters, the Pentagon and the U.S. Capitol, yet never killed anyone.) Throughout the work, she expresses sadness at her failure to trust her instincts under intense pressure to conform.

What led sixties youth to collectively identify as urban guerrillas? What led them to challenge structures of power by, well, actually challenging their physical structures? Wilkerson wasn’t always easy with violence. Her first taste of street fighting, during the 1969 Days of Rage in Chicago, seemed unnecessary: “The random vandalism still seemed like a tactic without the dignity to match the justice of our objectives.” Nor did slogans like “Off the Pig” and “Smash the State” initially sit well with the pacifism she had embraced as a teenager. For Wilkerson, embracing (and romanticizing) violence increasingly seemed like the logical response to violent times.

Arriving at Swarthmore College in the mid-60s as a sunny Quaker camp counselor with interest in music and civil rights, she held dear to what she calls “a child’s sense of fairness.” The campus was alive with conversation about injustice at home and in Vietnam, and evidence of a rapidly changing society: rock and roll, Motown and Helen Gurley Brown’s Sex and the Single Girl stood out as signs of the times. Active in the movement for integration in Philadelphia, she joined Students for a Democratic Society, which would eventually lead her to Madison, then to the national office in Chicago as editor of the SDS magazine New Left Notes, and later to Washington, D.C. Eventually, she would realign herself with the splinter group the Weatherman, a group that addressed race and poverty in America by defiantly calling for “a fighting, anti-imperialist youth movement.” Borrowing gun imagery and seductive slogans of war to make revolution sexy, the Weatherman’s tough talk and look (let’s not forget the sunglasses—they looked really good) gave new voice to cadres of youthful activists ready to cast off previous selves in search for immediacy and acceptance.

The terrain wasn’t easy to navigate. Bombastic, posturing, competitive and overrun with dominant personalities, Weatherman’s affectations were deafeningly loud. “I didn’t seem to be able to be part of the collective voice and still have a voice of my own,” Wilkerson observes as she details the group’s demanding regime of martial arts training and hyper-accusatory “criticism/self-criticism sessions” in which everyone’s integrity was raked over the coals. If that wasn’t trying enough, the group’s anti-monogamy policy was a novel way of addressing sexism: it was a dictum on women’s lib issued by men enabling them to sleep around as a means of fortifying “the collective.” Aside from the charismatic figure of Bernardine Dohrn, women were sidelined in early Weather days, and Wilkerson writes with regret at having once described feminists as “man hating freaks.”

Exhausted and subsisting on oatmeal, cigarettes, coffee and alcohol, Wilkerson defied orders and flew cross-country to meet her lover Terry Robbins in New York. Their meeting point was Nathan’s Hot Dog Stand in Times Square. A few days later, wearing a fake fur stolen on 14th Street, she feigned the flu to her father and stepmother before their departure to St. Kitts. Townhouse keys in hand amidst a flurry of plotting and discussion, she and Kathy Boudin, Terry Robbins, Ted Gold and Diana Oughton camped out for the next several days of plotting and, totally unfamiliar with explosives, collect the water pipe, blasting cap, dynamite and nails necessary to reach the fiery crescendo that “reverberated through the house and in place of the ironing board, a mountain of splintered wood and brick rose up all around me.” Three perished; Boudin and Wilkerson ran from the inferno. On the street, the dazed women were ushered inside by a stunned neighbor. They quickly showered, stole clothing and, after rummaging for money or a subway token, slipped out of the ensuing chaos into the subway below—and into hiding for the next ten years.

The explosion and the townhouse-sized gap in Greenwich Village left behind was, in many ways, only the most spectacular component to a narrative of breakage. The blast shattered more than wood, glass, brick and bone. It represented the broken political contracts of war, racism, disenfranchisement and poverty and broken faith within the Left’s goal of addressing these issues. It was also a broken regard for human life–the bomb was intended for an officer’s dance at Fort Dix in nearby New Jersey, and if the dynamite didn’t kill the officers and their dates, then the nails they stuffed inside the bomb certainly would have. For many, the explosion represented the self-destruction of sixties idealism. (It was akin to another home famously ripped apart by violence: 10050 Cielo Drive in Los Angeles. Note what Joan Didion says of learning of the murder of Sharon Tate and four others in The White Album: “The tension broke that day, the paranoia was fulfilled.”) What more apt metaphor for a broken system than a broken home? Wilkerson’s memoir may be an attempt to heal the fallout from that day. She’s forever implicated in a plan that she wasn’t even sure of at the time. When the bomb went off below, Cathy Wilkerson was upstairs at the ironing board, trying quickly to smooth evidence of their presence at the townhouse from the family sheets.

The most compelling elements of Wilkerson’s work lay not in big-picture politics, however, but rather in details of life on the run. Hiding out in safe houses and giving birth as one of America’s Most Wanted, Wilkerson struggled to make ends meet as a poor single mother. She assumed different identities, moving from low-paying job to job across the country. Private and self-protective, she notes that many of her co-workers on factory floors and HR departments were onto her as a fugitive, but not necessarily one fleeing the law. Rather, they suspected that she was the more common type of female outlaw in America: someone who left everything behind to escape an abusive relationship.

Now with nearly forty years of distance, several projects have appeared on the Weatherman. Bernardhine Dohrn’s collection of communiqués and poetry by Weatherwomen in Sing a Battle Song, Jeremy Varon’s historical cross-study of the Weatherman with West Germany’s similarly Bonnie-and-Clyde-minded outlaws The Red Army Faction in Bringing the War Home, and Sam Green’s documentary The Weather Underground, to name a few. In all of these, one marvels at the conviction that brought such collective action in the 1960s, and that so many college students would risk their prescribed class privileges and earning potentials to fight, literally, to the death for social change. Yet Wilkerson’s can be read as a direct comment on one of the most famous entries to the stable of Weatherman literature, macho man Bill Ayers’ revisionist memoir Fugitive Days, which in a 2002 review she scolded for “inaccurate and unforgivable trivialization of our experience…a cynical, superficial romp through struggles waged in the 1960s and 1970s to change our country’s unjust and inequitable institutions.”

Consider Flying Close to the Sun an antidote to glossy, deracinated visions of sixties idealism in a time when guerrilla marketing is taught in Business 101. Look around and you’ll notice the pervasiveness of the street fighting icon: Madonna channeling Che (remember American Life’s unfortunate release simultaneous to the invasion of Iraq?); Comme des Garcons’ “Guerrilla” perfume; advertisements for The Fashionista Diaries dotting taxis and subway cars throughout the city. The Weatherman understood the power of effect and public image, and they harnessed it to sell ideas. Now, we’ve got the effect and selling down pat, but where are the politics?

I’ll tell you where. Put Wilkerson’s book prominently on your shelf, right next to The Autobiography of Angela Davis. And save some space. Next year Seven Stories Press will release the collected writings of Ulrike Meinhof.

Gavin Browning is a writer based in Long Island City.

Modigliani Up Close, the impressive retrospective on display at the Barnes Foundation—its only venue—this autumn and winter rekindled my deep-rooted feelings for the artist. The scholarly, well-written exhibition catalogue, accessible to laymen, added further to my appreciation.

With Close, Lukas Dhont is studious of the ever-delicate changes in a relationship that take hold when we look at each other, touch each other, and pay attention to each other differently.

From the grounds of Kennington Park, Jebo could see the top eight floors of Shellington House cast against the late afternoon sun. It would take careful looking to pick out his room on the twelfth floor. He stared hard but with no luck. Except for the pair of balconies on either side of each floor, there were no clear demarcations between the flats. To stare was a task. Squinting didn’t help. He recalled Richard Serra’s phrase with unusual clarity: The act of seeing, and the concentration of seeing, takes effort.