Big Dance Theater creates its own fantasy that’s simultaneously invigorating and perturbing in The Other Here, performed at Dance Theater Workshop in September. Blending cross-cultural exploration, and Okinawan pop music, the show is a folkloric romp openly embracing its lack of cultural purity. It’s a post-globalization fairy tale.

In her program notes, Annie-B Parson, who co-directed The Other Here with Paul Lazar, details the project’s genesis and gestation, starting with the first time she heard Okinawan pop music, which sparked an exploration into Okinawan dance and Japanese literature.

The narrative centers on Lazar who deftly plays “Mehdi,” an aging life insurance salesman who dances, often literally, between cursing his lazy, smoking servant (Molly Hickock) and touting the necessity of a sound life insurance policy to the audience (his assembled life insurance conference cohorts). Mehdi is obsessed with memories of his past, particularly his friendship with Aoki Nampachi (Chris Giarmo), who gave Mehdi a carp soon before Aoki’s death. Mehdi clings to the carp, first with a guarded air, then with increasing reluctance. The narrator, a cocky, almost smarmy Jess Barbagallo, struts the stage in a pinstripe suit, “pitching” to us while also chastising Mehdi because his “attachment to the past exceeds [his] excitement for today.” The storyline bounds between an old man’s traditional home life and the awkward formality of a life insurance conference, all the while sprinkled with lively dance sequences and enchanting lights designed by Jennifer Tipton. 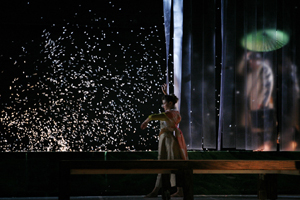 The Other Here, with Heather Christian, Paul Lazar. Photo by Julieta Cervantes.

Numerous punctuations of Okinawan pop and traditional dance drive the story. But disappointingly, they feel overly Western-influenced, as if a somewhat traditional Japanese garb were worn to a somewhat typical American club, with somewhat culturally ambiguous pop music. Then again, how could it not feel that way, as the company is a Western one. This influence, however, hardly distracts from the energetic dance party aesthetic that starts the show, complete with bamboo curtain, portable microphones and flashy clothes. The music is lively and the dancing is often lifted and sharp. Arms windmill as performers make staccato jumps in place. Precise, rigid hand gestures make tiny shifts as the rest of the body crouches low, ready to spring forward in a jump that alternates from the front foot to the back foot.

This vibrant movement is balanced by a couple of brilliant movement sequences set in silence. One involves all six performers simultaneously drinking tea, each performing a specific tea ritual. Together, their unified tea drinking offers both a counterpoint to the intensity that got them to the table, and a focused minimal dance, far removed from the whirls and leaps of the opening.

And so it should be in the globalized world, or at least, so Parson would assert. Just as tea rituals vary from one person to the next, she writes that “pure is not possible in a permeable world.” Big Dance Theater embraces the amalgamation of the West and the East: the reggae music and the Okinawan; the modern, Western life insurance policy and the ancient, Eastern policy of the carp, a traditional symbol of long life and good luck. This cross-cultural exchange embraces the immediacy of our globalized experience. Performer Heather Christiansen exemplifies this crossover as her bright, crisp voice coos an Okinawan love song. It is in the integration of the Okinawan music and song onto the Western stage that the show succeeds in championing the joys of cross-cultural sharing.

There are, however, aspects of the show that, although consciously acknowledged, still have the potential sting of Western appropriation. Parson recognizes the potential for “crass exploitation and cloying idealization” (e.g. the shady Asian villain or the over-sexualized black male) that the West has by now made into a marketable (even exportable) practice. Still, Parson writes that artists “have always been wonderfully clumsy in their misinterpretations,” and so seems to justify a potentially hurtful cultural appropriation as long as it’s well-intentioned.

For the most part, these types of misinterpretations are both consciously made and made fun of, exposing our silly stereotyping and engaging a discussion constantly worthy of further exploration. Cultural appropriation is an admirable subject to tackle, though there is a deeply challenging and perhaps troubling responsibility tied to wielding sets of stereotypes of the East that were originally created by a racist Western empiricism and are now taken on by an all-Western cast. Parson, of course, knows this, but even when done with the best of intentions and the willingness to simultaneously make fun of one’s own cultural faults and mistakes, ample potential remains for misinterpretations.

The Other Here is a worthy attempt at refreshing the mood of cross-cultural interaction, albeit one that cannot escape a subtle sense of Western entitlement as the justifying force that allows it to make such a statement.

From 1962 to 1964, Judson Memorial Church hosted a series of performances that challenged the conventions of dance. These “Concerts of Dance,” performed by a group of artists collectively known as Judson Dance Theater, centered on choreography that involved quotidian movements and simple prompts. Incorporating everyday objects and music, these interdisciplinary performances were imbued with a spirit of experimentation and collaboration.

The Deep Roots and Airborne Particulars of Judson Dance Theater

Something in the air wafted into New York’s cultural scene as the 1950s became the 1960s with the dance world no exception.