Ugly Duckling Presse began as a college ‘zine in 1993 and evolved into its present form as a nonprofit art and publishing collective in 2000. Publications include the full-length book Nets by Jen Bervin and chapbooks by Kostas Anagnopoulos and Micah Ballard. 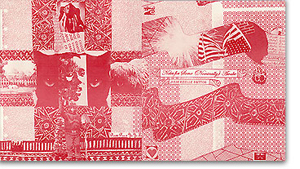 Notes for Some (Nominally) Awake by Julie Patton.

Korman (Rail): It seems as if there is a strong synergetic current in today’s independent publishing culture and in poetry publishing specifically. How did you envision yourselves fitting in?

UDP: When we started as a collective in 2000, we had in mind a sort of free-form band of artists of different media collaborating together. The majority of us were writers, but we had a theater director, Yelena Gluzman, and two visual artists, Ellie Ga and Marisol Martinez. Regardless, we didn’t initially plan just to make books. Our plans were much grander than that.

By the end of 2002, it was fairly clear that UDP was tending toward being a publishing concern, albeit an unusual one. It wasn’t that we didn’t want to take part in pollination between media, but the fact is that the book had always served as the locus and topic of our conversation together. To my mind, the book per se asserted itself; our common fascination with the book as object led us to focus very much on the act and the art of bookmaking.

PPAYYL: There are so many ways that poets come to poetry. I want to be as open to the multiple trajectories always in formation—not only championing, for example, Post-Language writing or Fourth Generation New York School or any other coterie formation immediately accessible in this New York City vicinity.

Also, it is a conspicuous reality that much of what gets promoted as “experimental” or “avant garde” is written by white poets, usually termed Post-Language writing. I want to understand better why this is. Content matters as much as form which matters as much as tone. Diversity can be expressed through tonality. I see each chapbook as a space to work out these complexities. A poet moves between social connections and bodily personal space as well as interactive social-historical space.

Rail: Does poetry lend itself to these issues more than fiction? How?

UDP: I don’t think this cross-pollination with the visual is more prone to happen with poetry than with fiction. Poetry lends itself more to experiments in typography than does fiction; but I think that that’s because poetry does different sorts of things with words than fiction usually does (with many exceptions), and people are often looking for ways to express that difference more concretely.

PPAYYL: I recently re-read Octivia Butler’s Kindred, and might have replied “yes” before that. Any human medium can tend to be exclusive, closed off, less than porous, restrictive, etc. Definitely poetry included.

Rail: The Ugly Duckling website states that your press is looking to “create spaces in which people can have an experience of art free of expectation, coercion, and utility.” How do the added dimensions of music, visual and performance arts support your goals?

UDP: As for the visual arts: I think that we’ve maintained a fairly strong emphasis on the visual in what we make. Ellie Ga has been more active again as of late, and recently edited the photo-card/poetry collection “The States” by Craig Foltz, which is definitely more than just a pretty book of poems. We see the book as more than just a vehicle for words; I think that’s always been a big part of who we are.

Rail: Brenda, you have stated that you want text and visuals to stand on equal ground in your publications. How do you hope each unique creative element will affect the other?

PPAYYL: I hope that someone who picks up a PPAYYL publication engages with the eyes, the hands, the ears—none of the senses should shut down once reading occurs. Reading is thinking which is seeing which in turn is neurotransmitters surging and expressing through pathways of connection.

The engagement of expression needs not end with the word.

Rail: What do you think are the key distribution challenges facing independent publishers today?

UDP: It took us a few years before Small Press Distributors would carry our books, but since then, things have gone very well for us in that department. Before they did, the task was to get our books out to bookstores on our own, which was a lot of work; we still distribute our chapbooks (and anything that’s not perfect-bound) ourselves, through the network we’ve built up over the years. Certainly we couldn’t publish as many books as we do now without SPD (Small Press Distribution); it’d be more than we could handle on our own.

PPAYYL: It is okay that poetry slowly makes its way into new social spaces. I’m weary of mass marketing and pumped-up distribution vehicles. It isn’t romantic that chapbooks are passed from hand to hand—it is human, on a human scale.

Each PPAYYL edition is between 150 to 300 copies so I’m operating a bit differently than small presses that publish perfect bound books. I do have an outlying production cost that is significant to me, so it helps a lot to get support from the communities that surround each poet. The books are priced close to cost so all can partake. One chapbook will cost you the price of a beer.

Rail: Mainstream and consumer cultures have obviously become familiar with the idea of an interconnected world. Do you see what you and your peers are doing as utilizing a different part of the same entropic force?

PPAYYL: Interconnected, interdependent: it comes down to resources and resources are becoming limited due to overproduction/exploitation—this affects cultural modalities, philosophies about making.

I seriously question what all of this paper consumption is amounting to. I can’t easily excuse my production as being structurally different than say, Walmart, because the materials are the same. Sure, there were no sweatshop practices used but finally money was used to purchase materials in order to make and sell and distribute something. Academics use the expression “cultural capital” to describe this process—so it has direct application to the bigger multi-national enterprise of valuation.

Rail: Independent film and music industries have entered prominently into mainstream consciousness. Do you have a sense of how affected the public is by independent publishing?

UDP: Certainly UDP exists in a very small world, infinitely removed from the world of blockbuster films—or even popular independent films, such as Little Miss Sunshine. There’s no weekly list of poetry sales. No poets appear on late night talk shows (Jewel doesn’t count as a poet). I’ve said before that people—the public at large—have contradictory perceptions of poetry as something anyone can do and as something too abstruse to pay attention to. It’s culturally insignificant, really, and that’s fine with me. You couldn’t have a collective like ours if millions of dollars were at stake with every book.

Rail: What can we expect next from Ugly Duckling and Portable Press at Yo-Yo Labs?

UDP: As I mentioned, We are working to get a picture book line off the ground this summer—not exactly children’s books, but books that could be for children. One of them will be a book called Animals Versus Furniture, which is about just that. Our Lost Literature series is publishing Complete Minimal Poems by Aram Saroyan. A great work in translation (from the Swedish) is going to be Ideals Clearance, by Henry Parland (1908-1930), who lived in Russia, Finland and Lithuania, but whose first language was German.

PPAYYL: There’s the eco reader titled )((eco (lang)(uage(reader)) that I am co-editing with Evelyn Reilly (also a PPAYYL poet). In this collection of essays poets offer up descriptive, discursive statements about the relationship of ecosystem to language, poetry in particular.

Two chapbooks are immediately forthcoming. New Yorker Nathaniel Siegel, a passionate anti-war activist gender activist-poet has a chapbook that I am in the process of publishing called Tony. It is a sultry, stripped-down evocative text that is very gay and very lovely. Tonya Foster’s chapbook will hopefully be unveiled this summer. In addition she is currently completing Monkey Talk, an inter-genre piece about race, paranoia, and surveillance and Mathematics of Chaos, a cross-genre piece on New Orleans.

Maryam Monalisa Gharavi is an artist, poet, and researcher. Book publications include a translation of Waly Salomão’s Algaravias: Echo Chamber (Ugly Duckling Presse), nominated for a PEN Award for Poetry in Translation; the poetry volume The Distancing Effect (BlazeVOX); and Bio(Inventory Press), the first book composed on Twitter without the use of tweets. Artist books include Apparent Horizon 2 (Bonington Gallery); Alphabet of an Unknown City (Belladonna*), Secret Catalan Poem (The Elephants), Mohammad Wikipedia Book (Recess), and the co-authored (with Mirene Arsanios) Dictionary of Night (Ashkal Alwan). She lives and works in New York.

Tony Iantosca is a writer, poet and educator living in Brooklyn. Recent poems can be found in A Glimpse Of, and Everybody Press Review, among others. These poems are from a manuscript called Crisis Inquiry, forthcoming from Ugly Duckling Presse in 2023. Tony is also a lecturer in the English department at Kingsborough Community College (CUNY).