As the country settles uneasily into the fourth year of the Iraq war, and the population learns more and more each day about the fiction spun by the Bush administration, television, film and literary fiction have entered the fray. Last year, Clare Messud’s The Emperor’s Children incorporated September 11th into a narrative, detailing the effects of the terrorist attack on the lives of bourgeois, self-involved Manhattanites, and Sally Field watched her son go off to war on the glossy television show Brothers and Sisters. This year, the New York Times reported in September, Hollywood will offer mainstream America a slew of movies about the war itself, applying the Technicolor war imagery of Saving Private Ryan to a current conflict with no end in sight. A public focused on American Idol and Lindsay Lohan will have to contend with films such as In the Valley of Elah and Lions for Lambs and their consciences if they just stay home. 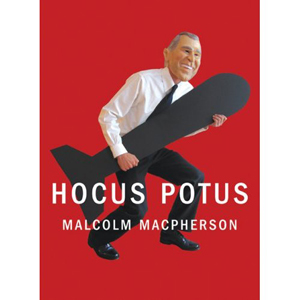 In the ranks: Malcolm Macpherson’s new novel, Hocus Potus, a brave and successful attempt at absurd realism. Labeled “the Catch 22 of the Iraq War” by Melville House, the novel resembles more of a Dr. Strangelove, blending fantasy with the stark apocalyptic reality of a nation at war at home and abroad.

Hocus Potus introduces a group of 21st-century lost souls, American opportunists who set off for Iraq with motley hopes and dark dreams. There is Rick, a modern-day Thomas Crowne, charismatic and mischievous, flirtatious and dark; Glennis, a bombshell pilot with a greed problem; McNeil, the pothead physicist; Kristin, the OCD young Yalie determined to work her way up in the current administration. All are stuck in Iraq, volunteer prisoners of POTUS (the President of the United States), and all are consumed with the futile hunt for the missing weapons of mass destruction.

Macpherson is a clever writer, and his narrative is written with the assurance only someone who truly believes in his subject matter can muster. All Americans know what the war feels like at home. Only an unlucky few, however, have a sense of what it feels like over there. We do not know the terror of checkpoints, the stench of the desert prisons, the strangeness of swimming in Saddam Hussein’s palace pool. These images, interspersed throughout the novel, lend a stark and pathetic beauty to a fast-paced, darkly comic plot.

Hocus Potus is, in the truest sense, a caper, and a brutal look into the search for, and the fabrication of WMDs. Much like Kubrick’s “love the bomb” slogan, Hocus Potus expresses the warped desire for the big kaboom yet to come. Humans crave purpose; if there is none, it must be invented.

Despite its fantastical elements, what is most effective in Macpherson’s novel is his insistence on the real problem of Bush’s war: there is no justification; we are only fanning the flames of hatred and violence. The novel ends on a disturbing note: in a presidential address at the UN, POTUS announces that WMDs will be found, finally, within days. Rather than receiving the expected “rolling thunder of applause,” he is greeted with scattered clapping and angry silence. The world Machpherson has created, it seems, is as wary of American lies as the real one.

Anna Wainwright is a Brooklyn-based writer and editor.

Adam McOmber’s Fantasy Kit is a slender compilation of thirty-five flash-length stories that are predominantly gothic in subject matter, surrealist in method, and genuinely unsettling in effect. The story “The Cornfield”stands apart for its realism, and yet clearly has much to say about the collection as a whole.

The Art of Eliminating a Nation

What a pain to hear a young woman cry, a thousand wishes gone. A child weeps for the father he has lost. These children did not choose where to be born. And yet, here we are. They are paying the biggest cost for this war of the world. To be witness to the explosion of a bomb in front of the girl’s school; one can never imagine. Their only crime was the desire to learn. This picture should be a source of shame for the world; it is a pure pain for us.