Katherine Arnoldi’s new book of stories, All Things Are Labor, is roughly, very roughly, sliced in half, with the first part made up of stylized, experimental pieces/stories, which contain the same type of material that the second half treats in a plainer, more realistic vein. The stories in both halves of the work feature protagonists who are either girls being raised by single moms or are single mothers themselves. They are usually lapsed or practicing Mennonites and live either in the Midwest or on the Lower East Side.

The big question of the book, then, would seem to be: what is the relation of these two parts? Or, to adopt older terms, what is the connection of the superstructure, the book’s carefully contrived meditations on the conditions of living, to the base, the second-half presentation that shows life in equally well-crafted, but very simple forms? 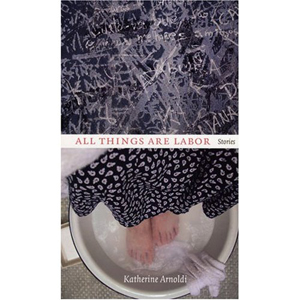 All Things Are Labor by Katherine Arnoldi

The stories in the base section work well, often pivoting on a captivating if depressing image, such as that of a stuffed horse’s leg that a Vietnam vet wears in place of an artificial prosthesis. The focus is on people, whom (though they would never see themselves this way) the middle class would consider down-and-out losers. They move forward with feckless and often infectious hope, as does the twice-abandoned teenage mother who optimistically adopts a crack baby left on her doorstep.

Arnoldi exhibits a hard-earned attention to detail and a sharp compassion evident in such finely chiseled pieces as “All for One and One for All.” In this story, the heroine, yearning for something better while being raised by her single mother in the slums of Canton, is sent to board with her upper-crust sister. She learns, “Living in the suburbs wasn’t so great. Everybody had two parents, but it wasn’t all it’s cracked up to be, I saw. The dads weren’t actually around, for one thing.” The sojourn is not the dreamed-of gateway that she imagined.

But what of the book’s first part? Arnoldi is more playful, less involved with the characters, and more open to the fantastic. In “Crosscut Saw,” for example, she describes, “My friend Anna senses things through her feet. Once, when we were standing in front of the Second Avenue Deli, she told me that her lover had stood in that exact spot an hour before kissing a new lover.”

In “X,” the type of swaggering, soddenly romantic, macho love interest who will desert the heroine in the second part, is portrayed in more shining garb, as a lyrical figure, who has “a voice perfect for a big chest, a heavy beard. It is a voice that blows out walls, gets one over, comes on over the telephone.”

At outset, I thought maybe the first part consists of stories that were written as defenses, murkily beautiful defenses, against the grimmer aspects of existence, which the author confronts in the second part. On further consideration, I remembered Walter Benjamin’s concept of collective libidinal forces. He argues that intellectual productions, ranging from the most high-flown to the most popular, present wish images with which “the collective seeks both to sublate and transfigure the incompleteness of the social product and the deficiencies of the social order of production.” According to this view, culture covers over the injustices of society while (more positively) encoding in its creations people’s hankerings for a more equitable social arrangement.

The two parts of Arnoldi’s story provide a metaphorical expression of the connection between culture and its hidden background. The second part of All Things Are Labor represents the base, the gritty, generally unpleasant life of ordinary poverty in the U.S., while the first half, signifying the superstructure, is postmodern culture, which is created from the same stuff as the second half, but provides a glossy surface so as to hide the imperfections of experience. It’s an ingenious plan for an enticing volume.

three from Now, Here, This: Half-Sonnets

Ron Silliman's latest publications are a co-edited collected poems of David Melnick, entitled Nice, to appear in 2023 from Nightboat and in the Russian anthology whose title translates into From Black Mountain to Language Writing: The Newest Poetries from the United States. Ivan Sokalov has recently translated You into Russian as well. Silliman lives in Pennsylvania but may be moving to Delaware. He teaches at Penn.

Half a Dozen Fresh Baked Dances

Named for the patisserie that once inhabited the 1920s-era building, Art Cake has taken the gallery aesthetic to the extreme with white floors, white curtains, white track lighting. Though seemingly designed for visual rather than performing arts (the floor is cement), this year’s second ever Dance Series featuring six artists showed its potential as a home for experimental dance.