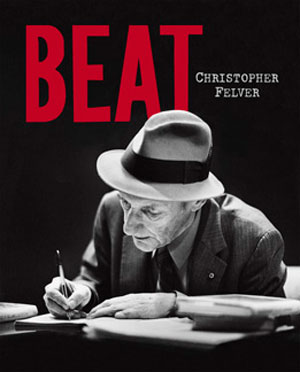 Christopher Felver’s assemblage of images and text for Beat evokes the ephemera of a snapshot -album or personal scrapbook. The typewritten dedicatory page of Howl appears alongside the invitation letter Allen Ginsberg wrote in 1955 to the mythic “ 6 Poets at 6 Gallery” event. Newspaper clippings, sketches, the occasional whole poem, and signed greetings from friends decorate the space around Felver’s photographs of Beat Generation writers in their later years. As a kind of homage, Beat portrays the writers amid a constellation of extended friends, followers, and colleagues who through the eighties up to the present day continue to live and work along similar lines of imaginative dissent.

Through Felver’s five-part essay, along with the book’s several introductions, the spontaneous, visceral, free-roaming Beat ethos is heavily lauded. The question remains: what does one choose to remember of the generation that “suddenly left to fend for themselves.” In her preface to the latest reprint of Jack Kerouac’s The Dharma Bums in 2006, professor Ann Douglas referred to a certain radical devotion among the Post-War generation of writers “to defy the censorship of the mind.”

Felver’s essay , as the narrative centerpiece to Beat , recounts his first associations with the San Francisco literary scene as a young photographer in 1979. While waiting outside during intermission at a poetry reading in North Beach, local writer Neeli Cherkovski appeared from the audience, and invited Felver to meet poet and publisher Lawrence Ferlinghetti, who then introduced Felver to the community of San Francisco writers, artists, and other creative personalities with whom he kept in contact with through the following years. “Allen Ginsburg’s address book was an integral part and metaphor for the whole roadshow,” writes Felver , “that trail of friendship and trust is how this book was made.”

While the majority of Felver’s portraits are posed, there is a curious interplay between Felver and whomever he happens to photograph. He captures the iconic gestures that reveal certain aspects of the sitter’s idiosyncratic personality. P hotographer and filmmaker Robert Frank looks straight at Felver’s camera in his portrait, sitting at a worktable in his studio, holding an open hand in front of his face to block the harsh afternoon light through the street-side bay window.

In one astonishing image, James Schuyler’s silhouette subtly emerges from the scattered heaps of letters, books, and paperwork that fill his office. Felver photographs the poet from across the room, using deep-focus with the composition vertically affixed in such a way that the viewer is led past the lines of the furniture and the contours of the room, and in to the intimate space. Schuyler sits unaffected by the clutter, shoes-off, reading the newspaper.

The diaristic consistency of Beat relates to an earlier effort to blend personal text and photographs in a depiction of Post-War American writers : Elsa Dorfman’s, Housebook: A Woman’s Photojournal. While working as a secretary to the editor at Grove Press from her house in Cambridge, Dorfman invited many of the poets whose readings she had arranged to come and stay at her home, while keeping a photographic record of their visits over the years. Looking through Housebook, one is drawn in to a similarly casual gathering, and learns who the subjects of the off-handed photos are through Dorfman’s expository prose . During the course of the 200 artists and figures that appear in Beat, many of them remain conspicuous in their absence from Felver’s commentary—t hough an exhaustive index in the back of Beat helps to identify the extended family of the Beat generation. In his preface, Felver cites Kerouac shared intent: “Life is a journey meant to discover and practice the beatific.” It is in this spirit that Felver’s book remains an invaluable document of the generation’s dynamic ethos .

A new performance festival from Vahram Zaryan links cities around the world, beginning with Yerevan, Armenia and Paris, France. The “Non-Mime” founder brings together artists across disciplines and nationalities to spark a global dialogue.