Since the 1999 debut of his first novel, The Fuck-Up (MTV books), a tragicomedy set against the seedy backdrop of the early 80s East Village, Arthur Nersesian has acquired a devoted following of readers who hearken to his underworld of sexual danger and urban claustrophobia. Nersesian’s subsequent five novels—all of them first-person narratives from the point of view of actors, writers, artists and other misfits surviving the hostile but inspiring environment of a darker, recently bygone New York City—combine tightly-woven plotlines with a certain sense of the mythic as his characters struggle with sex, work, love and mortality. 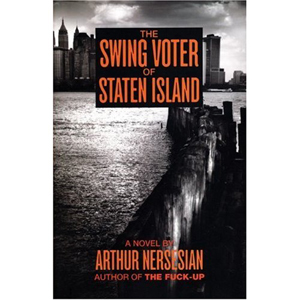 The Swing Voter of Staten Island by Arthur Nersesian

His most recent novel, Swing Voter of Staten Island (released this month by Akashic) is set in an alternate history of the year 1981. The amnesiac lead-character, Uli, awakens to find himself in a replica of New York City, built secretly by the military in the Nevada desert as a place devised to contain the politically dangerous. Such 60s icons as Timothy Leary and Allen Ginsburg appear as characters.

The Rail met up with Arthur at one of his favorite Polish restaurants in the East Village to discuss the past, the future, the new novel and the new New York.

Taylor (Rail): This is your first novel to include historical figures as characters. Is this a new direction you’re going in?

Nersesian: I always wanted to do kind of a big work. It’s very different and it’s a real departure for me. The last three books were about artists, and I think I’ve explored that as much I want to. Actually, I’ve been working on this thing on and off since 1991. This version is so different from the original that it could almost be a second book.

Rail: It seems like many of your novels have had a very long gestation period.

Nersesian: Some of that’s because I didn’t get my first novel published for a very long time—The Fuck-Up didn’t come out until 1999. But it’s good for this book, because the earlier version was a lot less developed. The same would have been true for Suicide Casanova, which I wrote in the 1990’s. It forced me to go back and re-work it.

Rail: Your first six novels were set in Manhattan, and here the first novel that isn’t set in Manhattan is set in a replica of Manhattan. And in your previous novel, Unlubricated, you were dealing with a post-911 city that is already filled with a sense of unreality. In a way, there’s a certain continuity in theme from Unlubricated to Swing Voter.

Nersesian: I was born in 1958, and I’ve lived in New York all of my life, except for a couple of years here and there. I feel like I’ve seen this city morph about three different times. The New York that I first grew up in during my single-digit and early-teen years was in decline, but you still saw the end of an interesting post-war culture. And then in the 1970s it went into kind of a free-fall, and I assumed that was going to be it for me, because I felt like the city was shrinking and becoming a hostile place. I couldn’t believe it when the city turned around. If you’d have asked me in 1978 what New York would be like in 2007, I’d have said this would be a wasteland, with a small shell around Times Square.

Rail: Do you see all the changes as positive?

Nersesian: I remember wishing that New York was a lot nicer, safer. I got my wish with a vengeance. I try not to romanticize those days. They were dangerous and dirty. But at the same time, in the darkness, in that low-life, dangerous kind of culture that New York once was, there was a kind of artistic freedom, and you really felt like it was your city, and that you had this greater sense of possibility. Now, I feel this quiet, impending doom. I’m going to be priced out of my neighborhood eventually, and I’ve lived here for twenty-five years.

Rail: Your characters are often put in situations where they have to assume a role, or maintain a disguise for a long period of time. Do you see role-playing as an essential part of New York life?

Nersesian: To some degree, I might just dismiss that as dramatic technique. People are people, and we have to present a certain side of ourselves. I’m actually very self-conscious, and I hate doing readings where I’m presented as “the writer.” But I suppose this is actually a key point. If you consider Hannah, in Unlubricated, where there really is no producer, where she’s trying to give this impression that there’s something much bigger behind her. Being a writer or an artist, until you really get the laurels and get established, you really are playing a bit of a con job. Artists have been some of the biggest bullshitters I’ve ever met.

Rail: Swing Voter’s cast of characters includes a number of historical counter-culture figures, like Allen Ginsburg, Timothy Leary, the Berrigan brothers and so forth.

Nersesian: Basically, I wanted to get a healthy cross-section of the anti-war movement. That’s one of the things about America today, it’s almost like the 60’s and 70s never happened. I was in my early teens when Watergate was going on, and saw a level of indignation about what Nixon had done. I feel like that’s what’s missing now.

Rail: What do you think has changed since then to make us more complacent? Has our intellectual and literary culture become more infantilized?

Nersesian: It’s difficult to make sweeping generalizations about culture, but I went by Barnes & Noble the day the new Harry Potter book came out, and I saw the lines in Union Square. The first guy that bought a book in that line came by Thursday at noon, and waited until Saturday at midnight. I mean, I’m not knocking Harry Potter—but what’s going on with our culture where you see people in their 30s and 40s buying this stuff up so that 12 million copies are sold on the first day? If the same amount of fascination occurred about China, or the war in Iraq, or Katrina, if there was any of this level of concern that there was with Harry Potter…It just says so much about the time that we’re living in and what’s wrong with it.

Rail: Maybe at some level people feel like the political situation is so far beyond their control that they can’t let themselves even become too emotionally invested in it.

Nersesian: That’s actually an excellent point, because if you listen to any of those guys back in the 60s—Abby Hoffman, Jerry Rubin, any of them—the gist of it was that this is our government, and the government is turning on its people.

Taylor is the Associate Editor of the online literary magazine Menda City.

Andrew Cranston: Waiting for the Bell

Waiting for the Bell, Andrew Cranston’s first solo show in New York at Karma, presents a new direction in scale for his dreamlike and beautiful paintings. The show is split in two distinct sections: one contains many of Cranston’s small paintings on book covers, which he is known for; the other includes eight large-scale paintings on canvas. These are the standout works in the show. Each has a restrictive color palette and depicts simple, oddly familiar and sparsely populated landscapes. A sense of stillness prevails over everything.