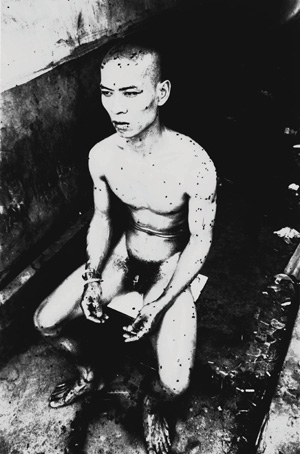 In 1994, the pinnacle of China’s post-Tiananmen “Shock Art” phase, Zhang Huan lathered his nude body in honey and fish oil and sat down on a roughhewn latrine seat in a public bathroom in Beijing’s East Village art colony, offering himself up as a tasty lunch to hoards of swarming flies and insects. That profoundly disturbing photographic image, “12 Square Meters,” launched his career as an outstanding voice in a new generation of jailed, reviled and exiled artists.

Moving to New York in 1998, Zhang enacted such performances as “My New York” for the 2002 Whitney Biennial, with fresh cuts of meat stitched together to make an Incredible Hulk-like body suit. He then strode down Fifth Avenue, handing out live white doves to be released. It was an act evoking both the rawness and vulnerability of post 9/11 America and, more subtly, the secret Tibetan Buddhist sky burial rituals where corpses are dismembered and fed to vultures. In “Pilgrimage—Wind And Water In New York” at P.S. 1, he full-body-prostrated his way up to a bed of ice, stripped naked and lay facedown on the frozen surface surrounded by a cluster of yapping pet dogs. In “Family Tree” he had a calligrapher paint the names of his ancestors on his face until his skin was completely black, obliterating his own persona.

Returning to Shanghai in 2005, he abandoned performance art saying he had no new ideas but “identified more with history now.” He collected antique wooden doors from Shanxi Province, pasting historical photos and carving images onto their surfaces for his “Memory Door Series.” Delving further into China’s Buddhist past, which the Cultural Revolution strove to destroy, he produced an open copper hand of the Buddha, “Fresh Open Buddha Hand.” as well as “Long Ear Ash Head,” a monumental head of the Buddha made from discarded temple incense ash. The head is so large that a section of The Asia Society’s windows had to be removed to move it into the gallery.

Zhang’s trajectory follows the warp-speed evolution of contemporary Chinese art: repression, shock art, exile, bravado, repatriation and budding historical and spiritual contemplation. The fact that Zhang has accomplished such a level of transformation in just 13 years is extraordinary, and makes his selection by The Asia Society and its curator, Melissia Chiu, to launch their museum’s brand-new permanent collection of contemporary Asian art, a collection long overdue in New York, all the more appropriate.

A tightly-written, well-researched, and suspenseful novel, Phase Six is set about five years after COVID-19.