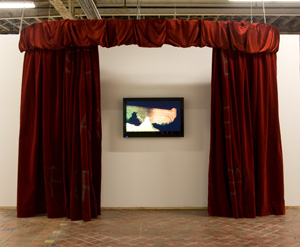 The Museum of Contemporary Art Detroit, which occupies a former car dealership in the city’s midtown, that measures 21,000 square feet, opened in October 2006. Initially MOCAD seemed to be a determined, yet fragile, experiment, but now, one year later, the space has proved to be solidly successful. So far, each exhibition has had a different curator, and each curator has selected contemporary works that, to varying degrees, converse with, or play off, aspects of the city and its surrounding metro area.

Words Fail Me, its bracing fourth exhibition, organized by Matthew Higgs, continues this trajectory in several interesting ways. The show, as its title suggests, focuses on language. The works by the fifteen artists represented (among them: Martin Creed, Jennifer West, Jonathan Monk, Ron Terada, Tauba Auerbach, Ryan Gander, and Sam Durant) function separately and together in their displacement of linguistic elements used in diaries, neon signs, placards, stories, speech and banners. Removing language from its traditional scaffolding paves the way to tease apart associations between word and image, and to probe the limits and—more importantly—possibilities of ways to communicate.

The exhibition’s use of the cavernous museum space astutely references Detroit’s landscape and history. People may have been dancing in the streets when Martha Reeves and the Vandellas recorded the 1964 song at Hitsville, U.S.A., or Motown Records. But soon after, the city lost large segments of its population (white flight, along with important businesses; Motown left Detroit in 1972). Since this time, there has been a notable lack of spontaneous outdoor activity. Instead, social and cultural goings-on take place behind closed doors: basements, industrial spaces, bars, living rooms. Techno music comes out of this condition, as does Jack White’s careful control of environment and presentation, restricting his band to specific colors and instruments.

Responding to this, Higgs separates the museum from the outside world by manipulating the lighting (artificially bright in some areas, dark in others) and covering the windows. This serves to turn the museum into laboratory, workshop, or theater. A site to work, brood, look, explore, listen, present, combine, reorganize, cross-pollinate.

The first room evokes the permeable membrane between private and public landscapes. A darkly-painted twenty-foot-high wall plastered with three rows of twenty-seven diaristic drawings of language fragments by Anne-lise Coste, Parmi les singes et les signes (tristesse et beaute), volleys with Siobhan Liddell’s barely visible clear pins stuck into a stark white wall, spelling WEAKNESS AS STRENGTH. It is as if Coste’s works moan and Liddell’s whisper. Both are equally insistent. Stacked on the floor between these two wall-mounted works is Jeremy Deller’s Folk Song. Deller printed lyrics from the Kinks song “Victoria” on poster-sized paper in three languages—English, Hebrew, and Arabic—for visitors to take. The lyric reads like a fighter’s mantra: “I was born, lucky me/In a land that I love/Though I’m poor, I am free/When I grow I shall fight/For this land I shall die/Let her sun never set.”

The second room, almost shrill in its fluorescent brightness, includes Carl Pope’s letterpress posters, The Bad Air Smelled of Roses. Pope’s moving and humorous printed chorus of voices explore what he refers to as “the poetics of Blackness.” (One reads, NOBODY MADE THE DARKNESS!)

The third and largest room is dark, barely illuminated by neon light and laser projections. Everything inside mesmerizes. At its entrance stands Rirkrit Tiravanija and Philippe Parreno’s video, framed by a red stage curtain, Stories are Propaganda. A text, written by the artists, is read by a voice that sounds like a young Harry Potter. The project weaves such an interesting narrative you are left with the sense that stories may be propaganda but they are also all-important. Works inside continue along this vein. Questions by Fischli and Weiss is a five-slide projection against the gallery wall of four hundred handwritten queries. Also here is Martin Creed’s Work No.336, neon letters, appearing at once lonely and turgid. They spell FEELINGS.

Opening night presented a jaw-dropping performance by John Giorno, whose body operated as the ultimate word vehicle. To see him, now 70, spry and dancer-like, recite, jump, lunge, perspire, engage and electrify the tightly packed crowd demonstrated the way words can course through, even construct, community.

This show is not about the failure of words, but about the limits of their current structures. Higgs’ interest lies in negotiations that discover words’ potential, their reconfiguration.