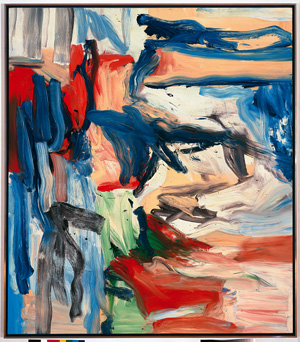 A body of work spanning de Kooning’s career from the early ’40s through the late ’80s is on display at Gagosian’s 21st Street gallery in an exhibition entitled Willem de Kooning: The Last Beginning. With Klaus Kertess as curator, it is an extraordinary show, distinct from Gagosian’s 2005 exhibition of the artist (at the 24th Street location) in two important respects: all the work is in the same room and the focus is on the controversial late work. Standing at the center of this singular, vast space, you can look from the early work to the late and back simply by turning your head. There are two great early pictures: “Fire Island” from 1946 and “Orestes” from 1947. There is a “Woman” and a selection of drawings from 1953 followed by several paintings from the late ’70s. The remaining 15 paintings are from the 1980s. 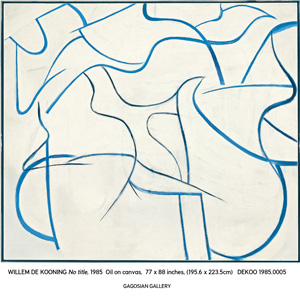 For someone like me, accustomed to staring at paintings as closely as security guards will permit, it is impossible not to notice the way the brushstrokes’ curving contours in an untitled 1979 painting which evoke the reflection of autumn colors in water, are mirrored perfectly by the crisp cobalt lines in the sparsest of the later paintings, also untitled, from 1985. When large quantities of oil paint are spread liberally about with large brushes and knives, as de Kooning often did up until his late work, one swath of paint will establish lines at its contours where paint masses around the painting tool. The lateral edges of any mark overridden by this stroke would consequently stop short. In his late work, de Kooning keys on this quality and begins producing more calligraphic works in which an actual overlapping of fine lines is hard to find. In the untitled 1985 work, crisp lines of varying widths are the only pictorial device employed on a white ground. They are either left to trail off into space or abruptly terminated by the intersection of other lines. Only infrequently do they overlap. In the 1980s, de Kooning is re-drawing his paintings in paint, codifying natural tendencies evidenced in his earlier practice of painting over charcoal drawing on newsprint.

For de Kooning, his own work is just grist for the mill. Much is made of Cezanne’s doubt and anxiety. I think de Kooning’s constant analysis of his own work rivals the French master. The early drawings in this show, one of a shirt on a chair and the other of leaves, reveal de Kooning’s restless search for an economy of gestural means to convey a maximum from his observations. He was forever paring down, then rebuilding on the foundations he uncovered. This is also revealed in his habit of scraping his paintings clean of all but the ghost of the work. “The last beginning” indeed. For de Kooning any painting could be no more than a beginning.

De Kooning mined not only his own technique, but history as well. Pieter Jan Saenredam is a 16th -century Dutch painter known for his spartan and exalted paintings of church interiors. These paintings always emphasize the soaring heights of the naves and the extraordinary geometry around which these structures were built. Inevitably there are several dark, diminutive figures talking or walking about whose scale conveys the puniness of mortal life in the presence of divine power as represented by the architecture. The marble walls of Saenredam’s churches exude light as if they had just been scrubbed clean, and the forms within their spaces seem threatened with dissolution in the glow. When asked by painter Dorothea Rockburne whether this compatriot of his might have influenced him, de Kooning replied with a smile that he had. In de Kooning’s late work, all form fades away in a ghostly and indeterminate whiteness.