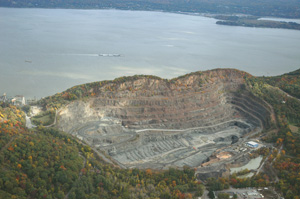 One of the most continuous experiences a New Yorker can have of a natural feature of the landscape is on a train going up the Hudson to Albany-Rensselaer, the station closest to the Center for Land Use Interpretation’s east-coast outpost in Troy. The view, pretty much the entire way, is as cinematic as a perpetual Hudson River School painting. The trip takes the two-hours-twenty of a longish feature; the windows have the proportions of film screens; the train follows the river’s course like an inexorable tracking shot.

The tracks run through much of CLUI’s installation Up River: Points of Interest on the Hudson from the Battery to Troy, and the Los-Angeles-based exhibition organizers almost certainly had their first experience of the Hudson’s lower 150 miles along them. One thing on view, though, is the many anachronisms, lacunae, and sinkholes of bad faith that puncture any fantasies of continuity—whether narrative or natural—that train tracks and flowing rivers might inspire. The American landscape (so, basically, goes CLUI’s organizing premise) is one of the strangest works of art ever made; however full of postcard-worthy natural splendors it may be, its defining features are as much the products of human use as they are of geological accident—never mind the Transcendentalist divine that 19th-century artists found such abundant evidence of in the Hudson Valley.

Land use, though, is harder to see than a mountain, and CLUI makes its often reclusive subject visible through a variety of means. A long topographical map of the river winds its way down one wall of the Troy storefront gallery, pricked with numbered tacks marking the “points of interest.” Aerial photographs and brief texts edge the map above and below, documenting each site with a tone that it’s tempting to call deadpan. But the exhibition’s wit is dryer than that: the written descriptions don’t really offset humor with an air of seriousness; instead they track the way that being serious about the real world inevitably devolves into absurdities and amazing ironies.

Some of the sites CLUI documents are obvious curiosities: any passenger on the train between Cold Spring and Beacon would wonder about Pollepel Island and its ruined turn-of-the-century castle (an arsenal that exploded in 1920 and caught fire in 1969, destroying everything but the building’s exterior walls). But many more of the pinpricks on CLUI’s map mark sites that are inaccessible, little known, stranger, or darker than they appear. There are seemingly endless cement factories, mostly abandoned; a mountain that’s been quarried so deeply from one side that the untouched face it shows to the river looks like a beautifully forested stage set; an island where sodden igloos once housed Naval weapons, now a bald-eagle breeding ground forbidden to humans; Indian Point Nuclear Plant (source of 25% of New York City’s energy); and Edgewater, New Jersey, a Superfund site just below the George Washington Bridge where luxury condos rise on a former asbestos and coal-tar manufacturing site, where the earth and water are suffused with the arsenic, lead, and chromium left behind when the Dutch multinational Unilever vacated its Edgewater plant.

It’s in these cases—where the site needs to be given substance in order to be seen for what it is—that the effect of CLUI’s data flood is the most interesting. The photographs are quite nice, but they probably aren’t meant to be much more than that—their hints of early autumn hold back too definitely from the full-on fall foliage spectacular. The real thickening of experience around these lost sites takes place when the viewer tracks them through language, maps, pictures, and memory: cross-referencing, double-checking, suffering the mild frustration of trying to match the text to the photo to the map, forcing one level of abstraction to match up with another, and forging some kind concrete experience—imperfectly concrete, but appropriately imperfect—out of the indirect evidence the documentation provides. Information offered up in this way is substantial, available to the senses—though the flip side of that materiality, as Robert Smithson pointed out, is that information is as subject to processes of breakdown as the eroding riverbanks themselves.

Smithson, who once told a dubious Allan Kaprow that installations “should empty rooms, not fill them,” probably would have admired CLUI’s exhibition space as well. Up River: Points of Interest on the Hudson from the Battery to Troy is located in its own endpoint, and that point is something of a void: even using the word “storefront” to describe the gallery seems questionable, since it implies a level of commerce and activity that downtown Troy doesn’t sustain on a typical Saturday afternoon. For now, the exhibition is open by appointment—the contact information is on the website (www.clui.org). And on October 29, CLUI’s founder Matthew Coolidge will be speaking about the Hudson River School at Dia: Chelsea (www.diacenter.org).

Anne Byrd is a visual artist based in Houston, TX.

Kevin Beasley: A view of a landscape

A view of a landscape opens with Kevin Beasley’s relief, The Reunion (2018), a heavy “slab” of guinea fowl feathers, Virginia soil, and cotton built up and suspended in polyurethane resin.

Pour sources his inspiration primarily from Persian and Japanese traditions, as indicated by his title—Manzareh and Keshiki both mean something close to Landscape, in Farsi and Japanese (they are often translated as “view” or “scenery”), though India and China are present, too. The result, though culturally variegated, is esthetically and chromatically coherent—and quite breathtaking.

Listening In: Illuminating the Landscape

Orsós is always illuminating the community around him, sometimes literally.