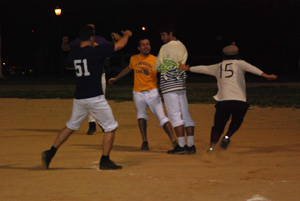 “Hipsters’ Brian Ross thwarts a last ditch scoring opportunity during their 12-11 victory over the Refiners.”

As clouds gathered in the evening sky over McCarren Park in Williamsburg, the United Sugar Refiners Health and Temperance Society’s last at bat versus the Hipsters of the North Side Fitness Center proved one for the (as yet non-existent) Straightjacket Softball record books. Four runs down and desperate to defeat their trans-historical archrivals, Hipsters, the Refiners, clad in knickers, suspenders and drivers’ caps, were able to squeak in three runs (with a beautiful sacrifice by George Moscoso). But excellent dodging by Hipster bases sealed the 12-11 victory over their proletarian foes.

In this softball variant invented by Tom Russotti, founder of Aesthletics, the bases are actually members of the fielding team in arm restrictive garments. The player has a ten-yard circle within which to dodge opposing players trying to make it on base. Other than this, normal softball rules applied. It was decided, after a mid-game argument, that infielders couldn’t block runners as they tried to catch the base. Bases were allowed, however, to wear out opposing players by running in circles. Improvised strategies and sudden rule changes are part of the Aesthletic treatment of the sporting act—which stresses socio-creative dynamics over competitiveness and athletic virtuosity. After I was handed my Refiners uniform—a hodgepodge of rummage sale buys reminiscent of 19th-century urban fashion—I set aside my assumptions about traditional sports and prepared for a good time. The Hipsters, clad in white pants, one size too small, and ‘ironic’ thrift store t-shirts, looked like kids from the neighborhood.

The uniforms emphasized Russotti’s concern about the vulnerability of social activities like sports and art to late capitalism’s commodification of lived experience. The Sugar Refiners, who worked in the booming refining industry of 19th-century Williamsburg before the existence of million-dollar sports/art industries, lived vastly different lives than the career bohemians who’ve recently gentrified the area into a pastiche Montmartre with I-pods. By overlapping these two distinct cultures in an absurd game, the players found themselves living inside their temporary archetypes and exploring what it means to be a type of person (hipster or worker) in a place (industrial center or cultural district).

Adding to the event’s already abundant ironies were the quips of sports announcer Mike McDonald, who candidly commented on the players’ backgrounds as they came to bat. One Refiner was jailed recently for knifing a fellow employee. A Hipster was moonlighting as a record-store snob until his trust fund matured. This commentary simultaneously lampooned professional sports (fame, scandal, money) and highlighted class distinctions between proletarians and college-educated youth. Later, when I met someone in hipster regalia, who hadn’t played in the game, unwittingly drinking at our post-game watering hole (white pants, ironic T-shirt, etc.) the implications of the game’s costuming came full circle. By altering traditional sports, whose fans recognize it’s just “not the way it used to be” and conflating it with art through the use of gags and costumes, Russoti asks why adherents of any cultural activity spend more time bitching about its problems than changing them.

Specto-Situationist psychogeography, as a methodology, gets too easily co-opted by contemporary art discourse with catchwords like “tactical media,” “street art” or “intervention.” Aesthletics works as a micro-strategy to directly combat, through lived experience, the bloated, spectacle-laden roles of both art and sports and embolden their convivial possibilities. Russotti has taken Aesthletics into pre-schools, inspired the initiation of Aesthletics leagues in other states, and used the chance encounters of the games themselves to engineer new sports. It is not enough for any cultural practice to be about problems at large (gentrification, wage slavery, eminent domain), it must deploy itself within the social terrain it hopes to change. Aesthletics is a noble grasp at the intuition driven out of us (athletes and/or artists) during our formal education and professional training, our sense of play as a mode of sociality in flux, simultaneously rendered and excused by its changing rules, which shimmer in and out of realization as the needs of fun and life dictate.

Daniel Owen is a poet, translator, and editor.

Tomas Vu, born in Saigon in 1963, moved with his family to El Paso, Texas, at the age of ten. He received his BFA from the University of Texas at El Paso, and took his MFA at Yale. Currently, he is head of Columbia University’s print-making center. His current show, The Man Who Fell to Earth 76/22 is taking place at The Boiler, a non-profit showing space that is part of the Elm Foundation, located in Williamsburg.