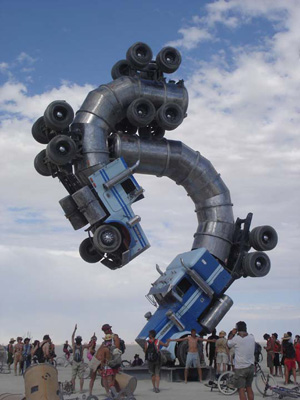 Even before arriving at this year’s Burning Man Festival, I knew that my main interest would be the art of the “Burners.” But my wildest dreams could not have prepared me for what I encountered there. Since 1987, the festival has grown to attract more than 50,000 fire-loving participants who set up camp in a temporary site in the Nevada wastelands, approximately 140 miles from Reno, called Black Rock City. The site is arranged in a half-circle, on the dusty bed (called La Playa) of a dried-out mountain lake.

The Burning Man Festival is much more than a temporary community, however. It is a city in the desert dedicated to radical self-reliance, creative self-expression and surreal art. Innovative sculpture, strange installations, bizarre performances, otherworldly themes, wildly decorated cars and costumes all flower from La Playa and spread to different communities (regional Burning Man events) and back again every year.

Burning Man supplies funds for certain collaborative, community-oriented art projects, but the vast majority of installations on La Playa are created independently by individuals or groups of artists. The installations are site-specific or mobile, human-size or gigantic, self-explanatory or totally mystifying.

Art-on-wheels is manifested through “art-cars,” floats, bicycles and golf carts transformed into something straight out of Baron Münchhausen. The “Burners” themselves are naked or dressed up in elaborate costumes, wearable art, piercings, tattoos or all of the above. By night they roam the dark terrain wearing multi-layered decorations of digitally sequenced lights and glow-sticks, headlights and multicolored blinking gadgets. 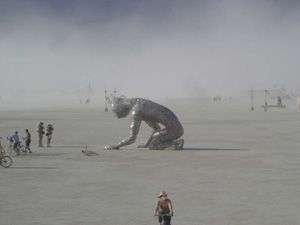 While the oppressively hot weather, miserable dust storms, white-outs and miles-wide terrain may conspire against voyeurs and art lovers, I was determined to experience first-hand the creative spirit that pervades the Black Rock City community. Media Mecca organized an art tour for journalists, and at the outset we were hit by the strongest dust-spin ever. Nevertheless, the show must go on, so we forged ahead to view the main art installations on the whited-out Playa.

Here is some of what I encountered while riding on a golden-dragon double-decker art-car, accompanied by a small army of samurai. We first spotted a huge, silver human figure crouched on the playa like a giant monkey, its hollow head filled with a video and sound system. I stood awestruck in front of this Sphinx-like, 12-foot-tall figure, “Koilos” or “Hollow,” by artist Michael Christian, almost afraid that it would swallow me. Or maybe it was, as the artist claimed, the demon of death and destruction. 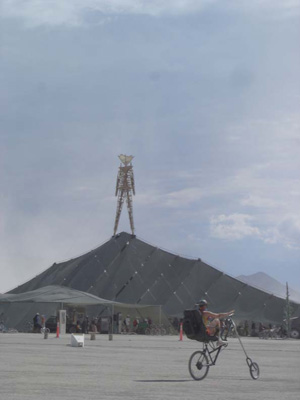 “Big Rig Jig” by Mike Ross was a vast sculpture consisting of two monstrous oil tankers connected by huge pipes entwined like two scorpions in heat. It trafficked in wonder, fear and instability, literally tearing up pieces of the oil industry and thrusting them into the air. Yet the artwork was filled with lush silk plant life, a reminder of the ultimate source of the black gold once transported inside the tankers. According to the artist, “Big Rig Jig” is both a visual metaphor for non-sustainability and a contemplation of our unique ability to recognize and change our most destructive behaviors.

When I saw “Astor Place Imagined,” a piece of New York City reconstructed as a conceptual installation in Black Rock City, it was just a few days after Brooke Astor passed away (she had financed the restoration of the real Astor Place in 1985). It appeared suddenly out of the dust, a strange film set coming slowly into focus. The subway station from 1904, the famous revolving cube, plastic honor boxes full of Free Press newspapers, a graffiti-covered van and a fire hydrant. The same as the real place except for the apocalyptic dust, a sad reminder of 9/11.

Another installation dominating this year’s event was the giant “Oil Rig.” Its centerpiece was a 99-foot-high wooden oil derrick, the tallest structure ever built at the festival, with an interior stairway that enabled attendees to climb to the top. To the left of the derrick stood eight metal human figures, partly comprised of connected metal rings, each equipped with its own participant-activated propane-tubing fire effects. Some stood, hands raised in supplication, while others lay prostrate in various contortions. Their poses were all intended to evoke prayer postures from different religious traditions, dramatizing the worshipful and dependent relationship of modern man to oil.

Later on, near the end of the festival, four huge containers filled with hundreds of gallons of jet fuel bought directly from NASA were placed at each corner of the derrick and set ablaze, creating an immense fireball, engulfing the top of the structure and shooting flames an incredible 1,000 feet into the air. I was a witness to what seemed like the largest flame cannon in history; as the tower collapsed it was met with clamorous approval, all of us in that instant become holy pyromaniacs

“Temple of Forgiveness” by David Best and Tim Dawson was an architectural marvel and a spiritual center. It featured four grand entrance halls that converged onto a central altar. Above the altar, an open tower rose into the sky, allowing a dynamic energy flow through the whole structure. As I approached, I could see inscriptions covering the entire building, consecrating the temple as a vehicle for remembrances and blessings, promises and forgiveness.

The actual burning of the Burning Man can be compared, remotely, to the royal cremation ceremonies in India and Bali, where mourners build and then burn a couple of dragons, a large white bull and a small black bull on a pyre that can reach a height of twelve stories. Burning 2007 started with a circle of 300 fire dancers around the giant green neon-lit standing man. The fire dancers performed synchronized stunts and even on stilts managed twirling techniques of mesmerizing speed. Suddenly the Burning Man came alive and raised his arms. A colorful fireworks display filled the desert night in lights never seen before, followed by an atomic-like explosion complete with mushroom clouds, and the Man went up in flames. As the conflagration quickly spread, one of the raised hands fell off, the other twisting cruelly around until it, too, dropped, prompting a wave of sound from the spectators that reverberated through the desert. The burning ceremony was a most solemn and moving ritual. I felt touched by spiritual forces of the mountain and the stars.

And yet. The so-called environmental aspect of the formal name Green Burning Man 2007 was lost on many of us as we choked for hours on a cocktail of thick smoke, gray ashes, fine dust and oil fumes. And there was plenty of evidence on display of truly obsessive-compulsive fire-related psychoses, the hot seeds of a sizable “fire-cult” in the making. And there was plenty of “green-irony” in the face of so many oil-guzzling RVs (some 20,000 of them by my estimation). The carbon dioxide “footprint” is undoubtedly still hanging in the desert air.