The 10th Istanbul Biennial, the Politics of “Optimism” 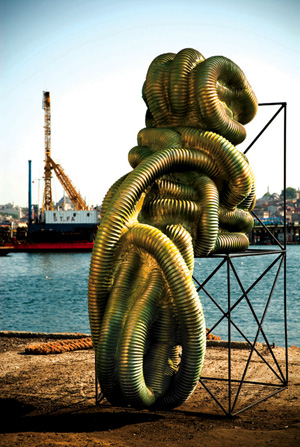 This September was the opening of the Tenth International Istanbul Biennial, and the twentieth anniversary of its inception. It was also my fifth invitation to Istanbul, which afforded the opportunity to compare and contrast with others I had seen. For this year’s Biennial, curator Hou Hanru developed a timely theme, entitled “Not Only Possible, But Also Necessary: Optimism in the Age of Global War.” There were six venues sited throughout the city on both the East and West sides of the Bosphorus, thus combining various areas and populations of this ancient city into an interactive, diversified whole. As with previous Biennials, it was challenging for some viewers, unfamiliar with Istanbul, to physically locate the various sites and equally challenging to make the connection between the curatorial theme—optimism—and the actual works on display. In most cases, the “optimism” appeared far distant from the art, especially given the politicized Dazibao-style rhetoric employed as a critique against today’s Capitalist cultures. As Hou Hanru points out in one of several short catalog essays, Dazibao refers to posters with large letters printed by the working classes against China’s elite during the Cultural Revolution. A major difference, however, between the Dazibao rhetoric that workers used in Mao’s time and its application to the Istanbul Biennial is that irony inevitably intervenes in the course of historical replay. Therefore, the politicized neo-Maoist critiques earnestly repeated by contemporary artists throughout this Biennial seemed oddly out of touch with the hyper-mediated images they were attempting to revoke.

While concerns such as the exploitation of the working class, the spread of poverty and disease, governmental corruption, urban decay, the disappearance of indigenous cultures through neo-liberal economic developments, and acts of warfare and genocide are all worthy of analytical critiques and activist engagement, the question may arise as to how they connect to the lives of unprivileged artists struggling to produce their work in a turbulent, unsettling, war-torn global environment. As a footnote to this question, one might also inquire as to exactly what Hou Hanru understands as “optimism.” Or is it something more than a pacifier or a corrective? Is optimism the justification for the existence of art? If the latter is the case, I would recommend—in lieu of “radical intellectual commitments, curatorial strategies, and physical infrastructures,”—a closer reading of Herbert Marcuse’s The Aesthetic Dimension, which explains clearly why art should exist in a world given to heinous crimes against humanity, whether they are induced by politics, economics, or the military. For Marcuse, art is less about radical presumptions than about the ability of artists to perform against the odds of what is being denied them, and to move instead toward a form of liberation that confounds and confronts the manifestation of power, representing it as an alienating presence destined to distort and alter the quality of life.

In fact, the Istanbul Biennial is not isolated from other important Biennials in how it functions in relation to this “international discourse.” Whether holding forth in Gwangju, Johannesburg, Kassel, Singapore, or Venice, the host of Biennial curators appears intent on obliterating the notion of beauty as a bourgeois trope once and for all. The language is one of politics at the expense of art, rather than finding a meeting ground between art and language. Politics is much easier—and more obvious—as a target for one’s anger. As a case in point, I was struck by the relatively disorganized array of provisional spaces in the IMC (World Factory) section of the Biennial. This section constituted a sprawling network of retail stores and import warehouses in which selected artists were invited to intervene. One display by the Istanbul artist Omer Ali Kazma presented six separate videos of different kinds of work, including brain surgery, clock making, a slaughterhouse, studio cermaics, a rolling mill, and other “obstructions.” Ali Kazma states that these banal images have “family resemblances and dance to similar tunes.” Apparently their intent is to raise awareness of the banality of work more than to heighten the relevance of what the work accomplishes. At the same venue Korean artist Sora Kim promotes an agency she calls the CapitalPlus Credit Union, in which prospective clients may open accounts that determine credit deposits according to the weight, length, quantity, and amount of various objects, including cash. The client must choose from one of these categories in order to receive interest at the end of each month. A third artist, Zhu Jia, from Beijing, created a room for living with basic furnishings—bed, hot plate, table, chair, and television—but wallpapered with two thousand 3 X 5 inch snapshots of people he encountered on the streets or around construction sites. He states: “The large number of photographs is used to diminish the uniqueness of each individual image.”

There are other sides to the Istanbul art scene. Not everything is focused on ideological or political intervention, and not all photography is about diminishing the uniqueness of the human face. Another point of view is found at the MAC Gallery, where the Brooklyn-based photographer Alex Webb presented a ten-year photographic project entitled “Istanbul: City with a Hundred Names.” Taken on the city’s streets, Webb’s series of color photographs depicts people of many ages as they move through their diurnal routines. It is not quite Cartier-Bresson in the sense of the “decisive moment,” nor is it documentation in the pure sense of the term. Webb’s photographs are more like portraits of ordinary people in which his subjects reveal fragments of an everyday narrative: people buying and selling goods, at leisure, or in conversation with one another. However, there is also a psychological and cultural dimension, observed through the objective eye of the camera, that is neither predetermined nor ideologically contained. Often Webb includes images of objects—products, graffiti on walls, various indigenous foods, such as tomatoes, fish, and olives—that serve as traces of human involvement, interactions or
exchanges.

The most arresting installation I saw was concurrent with but not included in the Biennial, created by the Istanbul painter and sculptor Ömer Uluc on a passenger ferryboat along the historic Bosphorus. In contrast to the interventions, ironies, and illustrative works that comprise much of this year’s Biennial, Uluc moves in a direction that is both provocative and aesthetically cool. His imaginary yet psychologically loaded tubular creatures—what he calls “Sea Devils”—are arrayed across the three tiers of the ferryboat. On each level, progressing from bottom to top, Uluc’s shamanistic creatures—like Mallarmes aesthetic dictum—suggest forms without necessarily defining what they are. The bottom tier is a kind of dioramic photomontage, lit from both front and back, of various Devils from past years intermingling with one another. The second tier is a series of screen paintings in bright colors depicting these linear figurations as gyrating, haunting specters from another world. Finally, on the top deck, there are three-dimensional constructions made from plastic air ducts used in ventilation systems. The transformation of this warehouse material is spectacular, as the forms suggest the inner conflicts of the psyche through a shamanistic world of execration and expulsion, merging with the surrounding sea, the history of the Bosphorus, including the Medieval battles fought at the Golden Horn and the brink of Constantinople’s last siege as Byzantium fell to the Ottoman Turks. Uluc’s installation represents a time and a place, an afteraffect of the region. It is all that a Biennial should be without the presumption of a political edge, an opaque boundary ready to drown in a lost world, a contemporary myth pursued by the aftermath of a postmodern rhetoric, overloaded with doubt.

Where di Prima’s Annals offers first hand testament of what served as the countercultural underbelly of American cities poet and artists of her and Ginsberg’s generation thrived within, and also suffered through, the poems collected in her now underground classic Revolutionary Letters serve as directional guides regarding guerilla activities pushing an information blitz intended to spark cultural revolution.

Betsy Fagin is the author of All is not yet lost (Belladonna, 2015), Names Disguised (Make Now Books, 2014), and a number of chapbooks including “Resistance is beautiful” (therethen, 2019), “Belief Opportunity” (Big Game Books, 2008) and “For every solution there is a problem” (Open 24 Hours, 2003) among others. She works as a librarian in New York City helping people navigate information landscapes and shares embodied mindfulness practices to support community in cultivating resource for the ongoing work of collective liberation.

PROPHET: The Order of the Lyricist

PROPHET: The Order of the Lyricist by 7NMS, the duo made up of choreographer/dancer Marjani Forté-Saunders and composer Everett Saunders, is an invitation to an exclusive listening party of sorts.