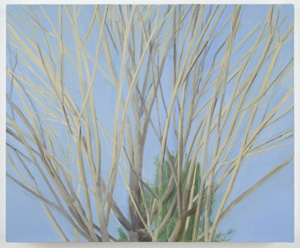 Sylvia Plimack Mangold’s primary formal preoccupation is the unyielding pressure of space against the painting’s surface. Each phase of her career can be defined by the particular way she explores the tension between surface and depth without relying on traditional devices such as illusionism and traditional perspective. Concurrently, over the past forty years, she has slowly but surely transformed her predilection for meticulousness into a preternatural sensitivity to light and air, its humidity and pressure, as they pass through trees, both leafy and bare. In doing so, she has moved from the fixed specificity of her early paintings of floors to an elusive one of trees against sky. It is a remarkable achievement that is likely to escape one’s notice because it is so plainly and even modestly stated; there is nothing at all showy about her work, and there never has been. Her work is as down-to-earth as a piece of Shaker furniture. All is there because it has to be there.

In Plimack Mangold’s most recent exhibition of eighteen paintings and watercolors, all of which depict the upper portions of trees, their branches creating overall patterns, one can see how far she has traveled since the late 1960s. In her early paintings, which were in acrylic, the artist depicted floors, walls, and mirrors leaning in corners or against walls, often with a patch of reflected light from an unseen source. In these paintings, Plimack Mangold revealed a deep affinity with Edward Hopper, who spent a lifetime depicting commonplace, non-picturesque scenes. The difference was in exactitude. Plimack Mangold’s ever more humdrum subjects, such as a linoleum floor, continually challenged her ability to translate direct observation into a painted surface. Hopper could get it right through suggestive brushwork, while Plimack Mangold’s resolution was a hyperreal precision; it was as if the artist had traveled across her subject matter with a magnifying glass. In their exactitude, the paintings were cool and blunt, but their light was always warm and inviting.

In the late 1970s, Plimack Mangold switched from acrylic to oil, and with it changed her focus from close-up views of floors and walls (controlled, circumscribed interiors) to distant views of a rural landscape with a vast expanse of sky (uncontrolled vistas). Sometimes the skies were as dark and light-absorbing as a late Ad Reinhardt. Others were dramatically lit with soft whites, pinks, and yellows. The brushwork became clouds without ever losing its identity. As with her floor paintings, where she often included a trompe l’oeil ruler along the side or bottom of the composition, she framed these scenes with a trompe l’oeil depiction of masking tape. For her, the relationship between truth and fiction was fluid. Her rulers could be seen as an implicit critique of the literal-mindedness of conceptual artists that felt that their brand of art had a larger purchase on the truth. And while it certainly wasn’t her intention, her trompe l’oeil masking tape could be seen as a rejoinder to Bochner’s well-known citing of Ludwig Wittgenstein: “Language is not transparent.” Plimack Mangold turned her nighttime landscapes into “windows” by framing them with “tape,” effectively calling into question what is real and what is artificial. Not content with realism’s legacy, she synthesized aspects of abstraction and conceptual art into her practice, dissolving the boundaries so that such categories are no longer mutually exclusive. It is no small achievement.

In 1983, the artist began focusing on a stand of trees. Having explored close-up views and distant ones, she eventually concentrated on what was in the middle ground. Rooted in formal issues, her deliberateness of choice conveys the breadth and authenticity of her ambition. In addition, she began drawing in paint, making the branches of the bare trees out of lines of paint. By the mid ‘80s she moved closer to the trees. Her views became angled and cropped. She was no longer looking down at a floor while scanning the painting’s surface, she was looking up at a tree, something that never remains still, and registering the subtleties of the light and the changing air.

In this exhibition of eighteen paintings and watercolors, the seasons are summer and winter, and the subjects—ones that have preoccupied the artist since the late 1980s—are a maple with a pine behind it and a pin oak. The view in “Winter Maple” (2006) is an impossible one; it’s as if we are hovering in the air, staring at the upper part of the tree, which begins below us and rises above our head. We see only a segment, which is surely a comment on our relationship to reality. Behind the maple’s branches, in the distance, we see the top of a pine. What is striking about the painting is that the artist doesn’t resort to any traditional perspectival devices to create a sense of space. It is the scale of the pine to the maple, as well as the scale of the maple to the size of the canvas, that helps locate everything in this small, squarish painting. In her articulation of the branches, each of which appears to be a single brushstroke, the artist registers the amount and angle of the sunlight or shadow through subtle tonal shifts. I swear one can tell exactly how cold it is, as well as how much moisture is in the air—and this comes across not only through her use of color, but also through the feeling of dampness she gets into the very paint itself.

This is bravura painting circumscribed by the artist’s complete devotion to observation and her subject matter. Moreover, Plimack Mangold never reduces her encounter with subject matter to a style; the winter paintings are done differently from the summer paintings because they make dissimilar demands. Consider for a moment the fact that the artist is an observational painter who has no style, and one begins to sense the purposefulness of her project, which is to stay fresh to that with which she has become familiar, to see it anew each time she paints. In the grisaille watercolors of the pin oak it is perhaps more obvious the degree to which the artist challenges herself to register what’s there. Each leaf or group of leaves can be done only once; there’s no turning back, no erasure. Each blotch and shift in tonality is irrevocable. And yet, as with the skies of her landscapes, only more so, every mark is both pictorial and abstract, with neither gaining the upper hand. Basically, with shades of black and gray (or what you could call dirty water), she has transformed dappled light and the play of shadows and reflections into a watercolor that rewards the most severe scrutiny.

Plimack Mangold’s art is a form of prayer, the recognition that each moment calls out for a different and specific manifestation of both praise and lamentation. She wants to keep her eyes open without seeking solace (or escape) in a concept, theory, or ideal. Her art speaks to us without regret about time and our passage through it.

Some painters are innovators (Picasso and Jackson Pollock) and others find innovative ways to challenge themselves (Velasquez and Edwin Dickinson). Sylvia Plimack Mangold belongs to this latter group.

It is a mystery how the twentieth-century French painter Marguerite Louppe has escaped the recognition she has deserved for so long. Born in 1902 in eastern France, Louppe and her family moved to Paris shortly after her birth. Louppe studied at several academies there, including the Académie Julian, where her fellow students included Dubuffet, Duchamp, Bourgeois, and Maurice Brianchon, whom she married in 1934.

From Space to Environment, Fluxus to Furniture Music: The Women of Kankyō Ongaku

This two-part essay takes an expansive look at the female artists that both prefigured and forged kankyō ongaku across disciplines, as well as the myriad influences informing their work.