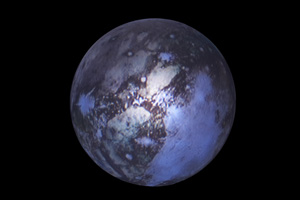 Robert Whitman is part of a bygone generation of artists who sought to cleanse art of the commodification and commercialization that befell the art world in the heyday of Abstract Expressionism. This ethical response defines a complicated and diverse gang of artists, emerging on the scene in the 1960’s, whose formal reaction to this state of affairs is almost too varied to circumscribe. Loosely grouped with such artists as Alan Kaprow and George Brecht, who showed at the Reuben Gallery in New York during the early 1960’s, Whitman, like his art-as-life peers, is remembered today as a countercultural gadfly he is revered as much for the art that he made possible as for the art he made himself.

Whitman is still a figure in the downtown art world, but a lot has changed in the past forty years. His most recent exhibition, Turning, opened in New York on September 7th alongside hundreds of shows by artists who weren’t a twinkle in an eye when Whitman first showed at Pace forty years ago. Whitman’s work has also changed since he was running around “living art” with Claes Oldenburg and Jim Dine in the East Village and creating voyeuristic, trompe l’oeil installations (Shower, 1964) and blunt, powerful abstractions (the Dante Drawings, 1974-1977).

Turning features a series of hemispherical bodies that act as screens for the projection of manipulated satellite imagery. How and to what effect the imagery has been changed isn’t immediately apparent. The illuminated halved globes hover at varying heights in the darkness of Pace’s grand interior like dioramas in a world-class planetarium. “Ganymede” (2006) is five feet in diameter and features imagery appropriated from NASA of Jupiter’s largest moon. The digital projection against the glowing plastic body rotates drowsily, like a hypnotist’s pocket watch. The reflective state that it induces is similar in effect to James Turrell’s exhibition in the same space last year. Whitman’s work, however, never completely combines the object and the experience into a single phenomenon.

Whitman says in an interview about the new work, “Our generation is the first bunch of people that know the moon close-up. On the one hand that’s kind of wonderful and on the other it adds another area of stuff we can’t imagine…another diving board to jump off into the unknown.” Works such as “Sun” (2007) as compelling singularities. The ten-foot-high projection of dancing, intense solar imagery taken from a Japanese satellite is churns on a crimped scrim, enveloping and absorbing the viewer. But for all its phenomenal magnetism, “Sun” isn’t significantly distinguishable from the rest of the work in the show, nor does it add much to the discussion about how such newly available cosmic perspectives affects society. The imagery making up “Earth” (2006) is familiar to anyone with a good computer and satellite television. With the recent abundance of utilities like Google Earth and a 24-hour cable station broadcasting images of our planet, the sights Whitman invokes as examples of “stuff we can’t imagine” seem mundane.

This criticism must be offered with the caveat that Whitman probably bears a burden that lesser artists don’t. The application of a double standard for Whitman is a perk of his position in the recent history of art. But it also brings up questions about how artists who established themselves as pioneers of a different era deal with the unfolding of new ideas and outlooks. Are they expected to remain faithful to a past that they initiated or are they judged like everyone else by the prevailing fashions of the contemporary art scene? While viewing “Playback,” a retrospective of Whitman’s work four years ago, it was hard to overlook the significance and brilliance of his oeuvre—one that was uncompromising and indeed crucial in shaping the climate of the current art world. With Turning, Whitman shows us a selection of work that is perfectly competent, and at moments brilliant, but also feels like an updated, polished and topical version of the crossover maverick of the 60’s and 70’s. And this fact brings his legendary past into the terms of the critique. Turning will leave viewers perfectly satisfied if compared with the other shows opening the 2007 season, but that doesn’t address the scale of his prior achievements. Depending on one’s perspective, this show will either be a sign of Whitman’s ongoing renewal or the tempering of an extraordinary artist.