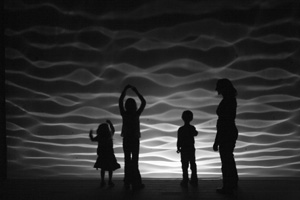 If you’re thinking about a visit to San Francisco in the next few months, SFMOMA’s exhibition of some two dozen projects by Olafur Eliasson—by turns beautiful, ominous, soothing, funny, and wondrous—is a good reason to book a flight.

True, you could wait until the Icelandic artist’s first full-scale U.S. survey arrives at the Museum of Modern Art and P.S.1 next April. But then you’ll miss being part of the early buzz and one of Eliasson’s most buzz-worthy installations, a deep-frozen car that’s making its only U.S. appearance in San Francisco.

Eliasson’s best-known work, the 2003 Weather Project at London’s Tate Modern, used mist, a mirrored ceiling, and a gigantic “sun” made of monofrequency bulbs to create not an illusion, but an immersive shared experience that drew critics’ applause and almost two million visitors. The SFMOMA show offers nothing on that scale, but it showcases Eliasson’s knack for using simple means to simultaneously engage our critical intelligence and our primal desire to be wowed.

As its title suggests, Take Your Time is a call to contemplation and to pleasure. One of the loveliest works in the show is also the earliest on display, the 1993 Beauty. A perforated hose showers a curtain of mist in a very dark room while a spotlight trained on the droplets creates rainbow colors that alter as the viewer changes position. The falling mist and shifting hues look like the Aurora Borealis, like strands of hair, like ghostly fire.

As with so many of his works, much of Beauty’s power flows from Eliasson’s openness in showing how his effects are achieved, and from the way you’re encouraged to observe the responses of the people around you as well as your own.

Also beautiful, in an entirely different way, is the 2007 One-Way Colour Tunnel, a site-specific work covering the catwalk high above the San Francisco museum’s atrium. Acrylic panels transform the walk into a jagged black burrow in one direction, a riotous passage of prismatic, vividly colored patterns in the other.

The exhibition feels like one of those Halloween haunted houses where everyday space is transformed into a surprise-packed labyrinth, even if the level of delight is uneven. In one room, a towering wall of green-gray moss looks like an all-over painting and brings a faint but lovely aroma of the outdoors into the gallery. In another, visitors’ footfalls create patterns of ripples on the wall. In a third, looking into what seems to be a black hole reveals a vast wall of windows with your own face peering out of every one. A fourth room is crammed with models and prototypes from Eliasson’s Berlin workshop, a Wunderkammer full of spheres, spirals, and other natural and mathematical forms in wood, paper, glass, and metal. The standard line on Eliasson is that, while he may be a crowd-pleaser, he is fundamentally concerned with challenging capitalist consumerism and our habitually passive ways of seeing. Exhibit A in this line of argument is Your mobile expectations, a work that won’t travel with the rest of the exhibition.

It began as part of BMW’s “art car” series, for which Alexander Calder, David Hockney, Jenny Holzer, and other luminaries have decorated the German manufacturer’s automobiles. Eliasson and his crew of designers and engineers took a radically different approach. They tore off the car’s outsides and enclosed it in an 18-foot-long, densely ribbed dome of ice that renders the car not just undrivable but almost unidentifiable. It’s exhibited inside a giant freezer that visitors enter draped in gray blankets that turn them into monks or pilgrims.

It’s easy enough to see this preposterous artifact as a polemic against global warming and our oil-addicted society. Perhaps Eliasson himself sees it that way. But while the ice car sends up the art-enhanced status object, it’s so giddy with its own technological can-do, so wackily extravagant, that regarding it as primarily an expression of “oppositional” pieties seems absurd.

After all, a five-miles-to-the-gallon Hummer will at least haul you from one place to another. Eliasson’s BMW is a far more gorgeously wasteful object—although SFMOMA has attempted to reduce its no doubt substantial carbon footprint by using geothermal energy from local geysers to run the gallery-sized freezer.

And is walking around a frozen car or a misty rainbow really more likely to radicalize consciousness than, say, attending a pop concert or playing a video game? It’s thrillingly unclear whether Eliasson’s achievement is to subvert our culture of spectacle or find new ways of exploiting it.

The point is not to chastise Eliasson for wasting precious natural resources or for his skill in engaging the public. On the contrary. Take Your Time may deploy late-capitalist notions of spectacle and participation, but it does so with integrity and heart, and it puts every kilowatt and water droplet to excellent use. Resist the urge to define Eliasson’s work within the anxiety-driven terms of art-world criticality, and you’ll likely gain a deeper appreciation of all that Take Your Time offers, and enjoy it more, too.

Olafur Eliasson’s show at Tanya Bonakdar Gallery represents a focusing of energy and a break from the pressure of producing vast displays, offering “ocular relief,” a kind of COVID-deflecting eye candy for our society under pressure.