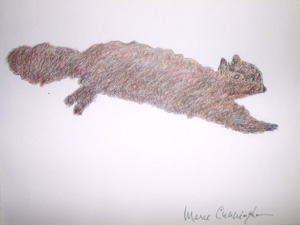 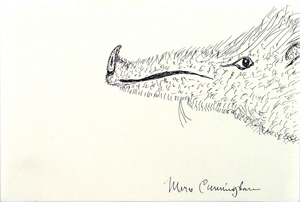 There is always the question, when looking at a minor body of work produced by someone who has mastered another form: Would this captivate, if made by an unknown artist?

But inevitable questions, in the end, are usually not so interesting. With artists, as with athletes, the most skilled practitioners often produce evidence that they could have thrived in other disciplines, and coming face to face with a great artist’s foray into another field is a joke that never grows old. When the hobby reminds us of the life’s work we are pleased. When it contradicts, we are also pleased (conversely, nastily, how we love further evidence of inflated reputations: is anything less poetic, for example, than the dreary watercolors of that ridiculously overstuffed versifier, Derek Walcott?)

In the delightful “Merce Cunningham: Drawings and Videos,” which has been on display all summer the Margarete Roeder Gallery, the punch line most immediately falls into the latter category: look! the great formalist of modern dance, mythologized for his cool, brainy collaborations with visual artists, turning the immense fertility of his mind to sketches of plush, beady-eyed pigeons and red, reptilian-looking prairie dogs! No austerity or rigor here!

But, as in the dances, there is plenty of silliness, strangeness, and confidence (those big, flowing signatures, as if he were signing one masterpiece after another) in this bizarre menagerie, consisting of 30 relatively recent drawings, mostly of birds, and mostly free of context. Like his choreography, these creatures speak for themselves. And, also like his choreography, the non-described settings for these sketches feel urban; these are city birds, seen through the eye of a man who got more nature through parks and zoos than through explorations of the great outdoors. In his excellent book, “Merce Cunningham: The Modernizing of Modern Dance,” Roger Copeland writes “There is no need to commission backdrops painted with likenesses of traffic lights or stop signs. What we witness is the deep structure of urban life, not the photographic surface.” True—yet one could imagine these creatures, with their fanciful coloring and amorphous forms, scurrying up or perched on those superfluous lights, staring balefully at the action below.

The secret has been widely out about Cunningham and his critters since 2005, when Aperture published “Other Animals: Drawings and Journals.” But, as with dance, it’s lovely to see them firsthand. This is especially so given the gallery’s terrifically kinesthetic installation, which matches the intense motion of Cunningham’s individual marks themselves. These animals seem to zip by as if on a merry-go-round. Some are given lots of space, such as a leaping squirrel, placed in isolation high up at the corner of a funny little nook in the otherwise smooth white wall. Others are clumped together, their pale frames flush against one another. They are like flocking birds. Or like Cunningham dancers, adhering to their own inscrutable trajectories and spatial groupings. The sense, and sensibility, is distinctly choreographic.

And what about those dancers? Following the whirl of the merry-go-round brings you to a monitor tucked discreetly into another corner. Four videos, spanning four decades, are available for viewing. The afternoon of my visit the gallery attendant had chosen, perhaps not surprisingly, “Beach Birds for Camera,” from 1993. Dressed in Marsha Skinner’s striking costumes (unitards, white up to the collarbone and then black, down to the gloves) and moving to John Cage’s “Four3,” with its rainsticks like waves washing up on a pebble beach, they resemble terns, or great black-backed gulls. Of course, Cunningham’s dancers often seem like strange birds, stalking about on stiff legs, holding deliciously off-balance, one-legged poses and regarding their fellows with cocked heads. But here the connection is made overt.

Directed by Elliot Caplan, the film often foregrounds faces, and follows particular dancers. Feet and hands are sometimes cut from the camera’s eye. The result is far more cinematic and less decentralized than watching an actual Cunningham dance. It is also, strikingly for a dance film, just as captivating.

Coming up for air, it is slightly unnerving to look over one’s shoulder and see all of Cunningham’s drawings, which manage to be at once naïve and disturbing, looking back. That malevolent woodchuck, just a puffy gray mass with a fuchsia ruff and no limbs to speak of, or that ridiculously green parrot, its single eye a red orb migrating onto the yellow half-moon of its beak—what do they make of the strange creatures on display in the films, creatures that, as Cunningham put it, “are also human beings.” What must rattle around behind those one-eyed stares? Just like Cunningham’s dances, they’ll never tell. Different species. Same island.