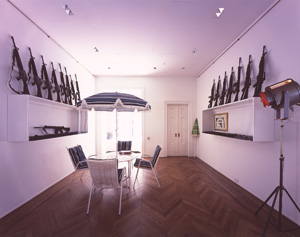 A one-second film composed of 24 hand-lettered frames bearing versions of the artist’s signature M.B. shown at 24 frames per second.

His farewell book of poems, Pense Bete, rendered literally unreadable, embedded by the poet in a lump of plaster.

A film by Marcel Broodthaers entitled A Film by Charles Baudelaire.

If even Marcel Broodthaers’ (1924-1976) intimate life companion Maria Glissens—whom he had authorized to reassemble Décor, A Conquest by Marcel Broodthaers, recently exhibited at Michael Werner, and who photographed the original installation with him in London in 1975 (shown once only, as were all of Broodthaers’ installations, and subsequently dismantled and dispersed)—today still can rightly wonder, when poring over some of Décor’s elements, “Why M.B. had the lobster and the crab playing cards,” are we ever likely to illuminate this veritable penetralium of mystery?

Décor was shown concomitantly with 14 films by Broodthaers screened at Anthology Film Archives on September 4. Rarely have I been so wowed. The patio furniture, parasol and picture puzzle included in both Décor and the film Bataille de Waterloo (1975) emphatically demonstrate the urgency of these co-presentations. Only in the film does the heartrending poignancy of war emotionally affect us. Here, a young woman sits at a picnic table attentively disassembling a completed jigsaw puzzle depicting the debacle at Waterloo. Reflectively, she considers each piece as she lifts them; then appears to find it faulty. Treating them as if they do not fit, and so are useless, she tosses each away.

At the same time, Décor, the “set” for Waterloo, includes a 6-foot high cast iron python standing poised to strike, which does not figure signally in the companion film. “S” shaped, and anomalous in such Edwardian surroundings (which, in Broodthaers’ words refer to “war and comfort”) it looks like a question mark. Dead center in the room, it’s posed at the core of Broodthaers’ work: for it is an enigma.

The fish rots from the head.

Just as the British wore bright red coats to hide their own shed blood, Broodthaers found the co-dependants, war and comfort, infernally entwined.

In A Film by Charles Baudelaire (1970) Broodthaers documents the young Baudelaire’s ocean voyage to Calcutta. This 7-minute film is visually entrancing in its reserve. Composed primarily of maps in color and blank frames of black or white bearing a single word, like a subtitle, (which do not conspire to tell a story or even to form sentences), any relation to its topic is nearly as illusory as was the trip itself. Terminally bored, Baudelaire turned around at Mauritania, then simply claimed he’d been to the Far East. Bold seafarers are rife in French literature. Oulipo precursor Raymond Roussel did in fact reach India, which he viewed only from a spyglass while remaining onboard ship. He said, “There it is. Let’s go home.”

This will be a pipe.

While I prefer the barefaced elegance of Broodthaers’ Musée d’Art Moderne, Départment des Aigles (1970) to a more uncharacteristically didactic installation like Décor, no doubt his hand was finally forced by the sheer horrors of war.

Glissen, who introduced the films at Anthology, told an anecdote, indispensable to our Fine Arts education. Broodthaers made over 60 films in his scant 12 years as a visual artist, all on a shoestring budget. Financially constrained to making-do with found or donated film, they became accustomed to prevailing, using film lengths of but one minute and a half. Once she and M.B. happened on a “heap” of unshot film so huge they assumed a big bucks feature film was in local production. No. They were at a film school and that much film was used commonly for student work.