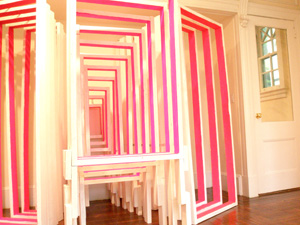 Though not conceived as a thematic show, Laura Newman, Claire Seidl and Cordy Ryman have plenty in common. Most importantly, they share a concern for architectural space; while realized in different media and under the spell of different aesthetics, these individual accounts are told in the same language. All three artists loosely reflect on the denominators defining the built environment, whether in urban settings or in nature. Their vocabulary, though not abstract, is clearly abstracted, never striving too far from a hint of a reference point.

Brooklyn-based painter Laura Newman aims to capture open pictorial spaces. In her artist’s statement, she names “painting air” as one of her ultimate ambitions. This, she notes, can be achieved only by depicting things that air encapsulates. At times reminiscent of Mary Heilman’s work, Newman’s compositions fuse expressive planes of luminous color with highly stylized fragments of rooftops, clouds, or electric wires. Color is employed as definite light source, as well as an emotional correlative. Her work leaves the impression of distinct sentiments that dramatize her graphically simplified descriptive elements. She also employs a kind of improvisational unpredictability that is as refreshing as it is unusual in hard-edged geometric forms.

Working three-dimensionally primarily in wood and sometimes found objects, Cordy Ryman creates playful constructs in saturated color similar to Newman’s but translated into actual environments. Reminiscent of Richard Tuttle or Jim Lee, Ryman’s objects are shape and color experienced in space, incorporating the gallery wall as point of departure. Protruding outward, they feel suspended between two realities: their own self-contained existence and their dependence on the surrounding architecture. They can be viewed as autonomous structures as well as interrogations of our own interpretation of our immediate surroundings.

At first glance, Claire Seidl’s works are the toughest fit in this group. They are black and white photographs that project a sense of classic structure, romanticism and mystery that is missing in Newman or Ryman. The images often incorporate a view through a window, the fragile divide between interior and exterior space. Seidl’s photographs, however, do relate to Newman’s paintings in the way they contrast concrete images of chairs or trees with abstract planes generated by dramatic light conditions and the soft focus due to infinitesimal camera movements during long exposure times. Originally a painter, Seidl explains her affinity for photography, which she began to pursue seriously only over the past decade, by pointing to the camera’s ability to capture “multiple layers of space and reflections in focus.” In this context, the camera functions as both a memory aid and a magnifying glass. Seidl’s work simultaneously uncovers and veils selected slices of observable reality, drawing the imagination into those parts we cannot see.

In addition to the main exhibition, a worthwhile installation by Judith Page can be found in the gallery’s Project Space. Entitled “Finalists,” it consists of various portraits on paper of the forgotten competitors from television shows such as “American Idol.” By focusing on those who enjoyed a brief moment in the spotlight before vanishing into oblivion, Page has hit upon a poignant metaphor. This installation charts the discrepancies between memories of the past and the reality of the present. In a video posted on the gallery website, Page sums it up: this work is about the giddiness of hope.

Cordy Ryman has long made a practice of installing works to suit the context of a specific gallery space, and his current exhibition at Freight + Volume is no different.