Since his 1995 movie Kids, Larry Clark has slid around the photographic line between document and exploitation, and to this reviewer there is something greasy and repugnant about this artist’s gaze. Like David Lynch’s use of violence against women, there is the sense that Clark is both exposing adolescent sexuality and getting off on it. What I disliked most about Kids, with its endless scenes of 12-year-olds shtupping, was what I felt to be its dishonesty; in the end the threat of AIDS is thrown in as a kind of afterschool special moral to the whole thing, when in fact the movie is at best an exercise in looking at children’s sexuality—human sexuality—square in the face, understanding that it stands apart from morality and redemption. Like the teenagers he documents, Clark’s raw energy is both his best and worst quality. 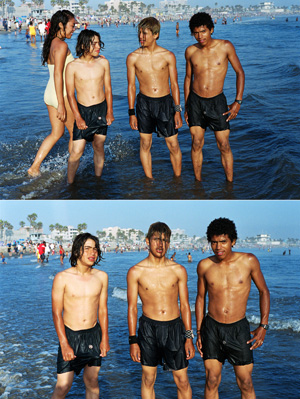 New photos by Clark at Luhring Augustine track four years in the life of Jonathan Velasquez, a Latino boy growing up in L.A. In some photos Velasquez stares out with all the pouty beauty of an underwear model; in others he preens with his friends, or shows off his latest orange-dyed quaff. One can sense that Clark is attracted to the posing of young boys in particular, the way they simultaneously threaten and seduce the camera. The girls in the show tend to recede; they seem hooded and secretive and sad. If in a mood to give Clark credit, one could imagine that he chose Velasquez as his subject because there are so few layers between him and his image; he is so willing to expose himself. Yet we take more of his swagger off the surface of the pictures than any details of his life. We see precisely what he wants us to see. He is as beautiful and cocksure as he would want to be.

What made Clark’s early work of young people having sex and shooting up groundbreaking, apart from the subject matter in itself, was that it felt the closest photography could come to merely looking, without a sense of intelligence, humor, pity or compassion. The further Clark moves from the age that obsesses him, the more he seems like a peeping tom. Yet maybe what is disturbing about the work isn’t prurience after all—as I’ve always thought—but a nostalgia for something that seems really tragic to me, a youth to which youthfulness is already lost, apart from that frenzied surface energy. There is a pathos lurking behind his work of which Clark himself seems unaware.

Sometimes Clark’s depiction of girls is more interesting even while less direct, as if he’s captured an image out of the corner of his eye, out of focus but expressive. The 2001 movie that he directed, Bully, showed the claustrophobic world of some Florida teens who decide to murder the leader of their group. The movie is fascinating in the Byzantine machinations of the kids as they party, plot, and fumble their way to their pointless act, and Clark’s perspectival vacuum, in this sense, works as a mirror to the meaninglessness of their scheme and their lives. The way the girls exchange their bodies for drugs, or attention, or just to get a little peace seems equally awful and true. Only one photo in the Luhring Augustine show moved me in a similar way, a group shot of the staff of a Hooters restaurant. The waitresses in their costumes all pose expertly, every smile flawless, but their faces are tired, and they look much older than they probably are. In the front stand Velasquez and another boy, looking fresh and full of beans, and Velasquez is smiling not at the camera, but to himself.