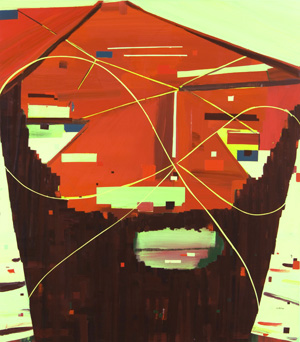 Jules de Balincourt has a grab bag of tools at his disposal. They are his means to an end. He tapes, stencils, incises, applies oil, enamel, and spray paint to wooden panels. An image maker with a cartoony and illustrational bent, he has developed a faux folk art style that combines flat areas of bright cheerless colors, engraved figures (cleaned-up versions of Bill Anthony’s boneheads), aerial views, naïve perspectival space, and painted phrases in block lettering. The innocent folksy style introduces a note of blameless charm to the work—closer to the jovial exhortations of the Reverend Howard Finster than to the dense, disturbing concentrations of Adolph Wølfli and Martin Ramirez. I don’t think the comparison is unwarranted due to the ambivalence the artist seems to feel toward the mindless nincompoops he depicts swimming and skiing. It’s as if he is trying to convince us that, despite their self-absorption and sense of entitlement, they aren’t so bad. Whereas Finster may have lamented our exile from Eden, and offered advice on how to find our way to Heaven, de Balincourt’s figures desire nothing more than to buy one-way tickets to fun-filled paradises, where death and suffering are put on hold. Our greed for leisure time, and the various escapes dangled before us by Club Med (or is it meds?), have resulted in carefully constructed havens of hedonism, where the signs of pleasure (frolicking by an immense waterfall or skiing down a winding path of carefully packed snow) are incontrovertible evidence of our narcissistic disengagement. We are not swimming in turquoise water, but in a carefully manufactured fantasy.

One problem I have with de Balincourt’s work is that depicting a castle-in-the-sky world in a folksy, fantastical style seems redundant; there’s little room for any frisson. While the style enables the artist to pull us into his seemingly innocent scenes of people relaxing, enjoying their sports, or mesmerized by a fire, it is only after we start scrutinizing the scenes and noticing the artist’s eye for telling details, that the dark side of the artist’s message becomes clearer, often delivered in wrapping paper colors. This leads me to the second problem, which is that de Balincourt, in his fourth show in New York in the past five years (he has also had ones in Boston and Berlin during this time), is starting to resemble his subject matter; he’s becoming a little too content with the world he has created. Too many of the paintings in this exhibition feel like riffs on the ones that first gained him attention. The details seem less pointed. There aren’t as many combinations of merry anecdote and authorial disdain as in the earlier work.

This is the question that I kept asking at his exhibition. Will de Balincourt’s satirical bent ever lead him into an area where the work might be both offensive and funny, some disturbing amalgam that would cast the viewer into a state of uneasiness or reflection? In “We Warned You About China” (2007), which is an inverted map of a brightly sectioned China with the words WE WARNED YOU ABOUT CHIN stenciled along the painting’s left side, and the A alone in the lower right hand corner, the “WE” becomes ambiguous and disquieting. Is it right-wing TV and radio commentators who are speaking or is it us, whoever we are? He gets right to our scapegoat mentality, our need to blame anyone we can get our hands on. He has tapped into our willful ignorance about the new economy that we are exploiting without considering its long-term effects. Do we actually think this ski slope will last forever? However, in the painting adjacent to it, a nighttime aerial view of an industrial city bordered by water along the bottom edge and the sky crisscrossed by searchlights, the bumpersticker slogan THINK GLOBALLY ACT LOCALLY suggests the breadth of his ambition, but in this case the painting could have embodied it more. It’s as if he didn’t believe in the image and chose to add the words, which strike me as trivializing. In his strongest paintings, de Balincourt is able to combine different kinds of legibility, from fast to slow. He gets us to look again. The weaker ones arrive too quickly and neatly, like the potato-like rock he depicts in the middle of a street.

De Balincourt’s cartoony, illustrational style is well on its way to becoming a well-oiled machine eating its way through a set of known subjects. Having worked out the relationship between his means and his ends, all he has to do is set it in motion. It’s when he steps outside this territory that something happens. In “Mad Arab” (2007), which was mounted high on the wall, the artist depicts a mask-like, abstract face that pushes beyond charm and forces the viewer to rethink the relationship between abstraction and representation in terms larger than the purely aesthetic. The “Mad Arab” can see us, but we can not quite see him, which is certainly an aptly paranoid metaphor for our times. It’s when de Balincourt touches on our post-9/11 biases and fears that he gets to something very different from his peers, such as Chris Johanson with whom he has often been compared. Instead of the Reverend Howard Finster, de Balincourt should consider the example of Peter Saul, whose work is never less than outrageous and outraged. At this point in his career, the artist has to raise the stakes for himself and be willing to leave his audience behind.

Olitski’s was a particularly robust late style. His paintings from the 2000s are both the apotheosis of a lifetime in art and a voyage into new pictorial territory.

The surfaces of Pessoli’s paintings teem with a diversity of mark making, which is part of what gives them their sketchbook quality. He uses pencils and stencils, oil sticks and spray paint, pastels and oil paint; all of them come together in an elegant play of texture which is especially charged when the viewer moves around the wooden panels and the gallery light rakes across the matte and reflective zones.