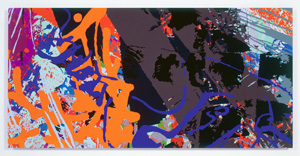 In his book Revisioning Psychology, James Hillman wrote: “We sail against the imagination whenever we ask an image for its meaning—requiring that images be translated into concepts.” Ingrid Calame has been praised for doing exactly what Hillman warns against—she has developed a style in which concept and process go hand in hand. With the help of others, she painstakingly transfers stains from the stuff of everyday life into a pictorial concept (or is it a conceit?) that has met with the approval of art historians and theorists. For them, and it would seem for Calame, the successful painting is a field of literal signs from which the imagination has been banished. In the handsome catalogue accompanying her most recent New York exhibition, which will travel to the Indianapolis Museum of Art (Calame was commissioned to do a project using the Indianapolis Motor Speedway), Pepe Karmel writes: “Calame’s paintings look at first glance like the work of a younger, more joyous Jackson Pollock.”

Karmel’s comparison carries some weight: he contributed a long, closely argued essay to the catalogue accompanying the big 1999 Pollock retrospective at MoMA, curated by Kirk Varnedoe. Although he doesn’t completely spell it out, at the heart of his essay on Calame is the belief that painting is valid only if it defines its existence as a semiotic field in which opticality plays a central role. We have moved from a formalist encoding of opticality to a linguistic one, and everything an artist does must be justifiable in terms of a semiotic argument. For Karmel, Calame’s painting of stains is the next logical step after stain painting, which, as everyone knows, was the right and historically important step to take after Pollock began pouring paint. He believes that art and its history fall under the purview of semiotics, and that optically flat abstract signs of our mediated experience offer the only compelling proof of art’s forward progress.

Calame’s translation process involves lots of mindless repetition, which separates it from Pollock’s paintings. It consists of working with a team of assistants to trace the stains found on the floors of cultural sites (a church, the New York Stock Exchange, observatories, and, more recently, the Indianapolis Motor Speedway) and the embankments of the Los Angeles River. She then uses colored pencils to retrace certain areas on Mylar, with each defined area or layer consigned a different color. In the next step, the artist transfers the composite drawing to an aluminum panel, which she then carefully fills in with enamel paint, using, as Karmel writes, “short, measured strokes.” The result is flat and optical, the pinnacles of Western painting as codified in the 1950s and 60s. Calame’s highly determined paintings and drawings suggest that she sees Pollock’s paintings only through the eyes of art historians and theorists. Why doesn’t the artist want to see for herself? I find this extremely disheartening because it is obvious from her work that she could do something far more engaging and idiosyncratic, and that she need not straitjacket herself. Why choose to become a chapter in someone else’s story? Why tell a story at all?

When you stand close to one of Calame’s visually packed paintings, you are likely to forget that you are looking at a brightly colored copy of stains. It is in the small areas that the juxtapositions of color and layering become visually engaging, and you might get lost in the looking. Standing near to the surface, and narrowing your focus, you don’t see what looks like a big tire track and immediately think speedway. This enables you to overlook, if only briefly, that the painting is made up of literal signs that are meant to remind you of all the little details of everyday life that you failed to notice. After all, there is something contrived and didactic about this equation. With their faint traces of brushstrokes, Calame’s densely crammed surfaces really are something to look at. And spatially, the unpredictable shifts between small and large, near and far, defy any simple reading. The forms begin to float free from their literalness, while the staccato colors and asyndetic transitions bounce you all over the place. Calame ought to aim for more than being mentioned in the same sentence as Pollock, who has seldom been given credit for all the different ways in which he worked.

In examining historical parallels, I recently reread Wilhelm Reich’s Mass Psychology of Fascism. Arguments over whether the United States is a fascist society or not are less important than understanding the conditions that have given rise to the form of authoritarian government, with a representative democratic face, we experience. 21st-century society is not a reproduction of 1930s Europe. But we can learn from previous historical eras.