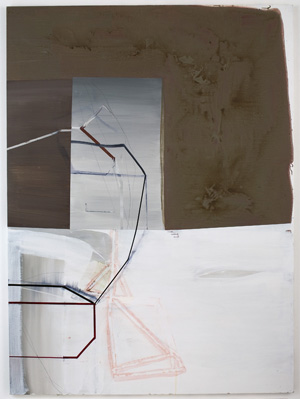 In his new show at Betty Cuningham, Gordon Moore proves that he is dedicated to evolving as a painter without abandoning the path he has determined for himself. He has dissolved the grid—a fixture in all the paintings from his last show—in a mixture of latex, pumus and Acolex (the latter is the key ingredient in making glossy acrylic paints). He applies this mixture and allows it to dry with the painting flat on its back. This produces the unmistakable organic rivulets that result from the sedimentation of particles in liquid. Moore retains the planes of earth tones, grays, greens and blacks that have long formed his palette as well as the network of variously scratched, painted and dragged lines that he has used to suggest the gradual emergence of form from a field, but the absence of the grid has given these old tools new force and propelled his painting into unexplored territory.

Moore turns the paintings as he works, resulting in a vertiginous disequilibrium. At 90×66 inches, the size of all the large paintings in the show, “Scroll” seems to verge on sliding off the canvas. A gray-green mass of his above-mentioned home brew floats above a scuffed up plane of white, dividing the painting roughly in two. A tertiary white plane sits atop the white mass to the left of center. Lines of white, black and red, some taped and others drawn, transition between the three planes, breaking the painting’s left hand margin. Another linear structure bleeds through the white from beneath. Moore’s way of defining each plane with a different type of paint surface, some of which even suggest an illusionary space by means of rendered shadows cast by the etched lines, allows his line work to function as a sort of grammar by which one reads the paintings from one plane to the next.

Grammar is the structural element of language. To consider language in terms of its grammar alone is to ignore its representational nature, an approach Moore seems to encourage in his paintings: insofar as this is possible, these paintings are strictly about the process by which areas of paint—the supposed locusts of content in any painting—are related to one another. Meaning is present in terms of a set of relationships. This may sound a little like the rhetoric surrounding the late 19th and early 20th century preoccupation with “Significant Form,” but perhaps such an interpretation is not wholly inappropriate. These paintings are consummately about the way parts relate to a whole. Significant Form, as it was defined by Bloomsbury critics Roger Fry and Clive Bell, was the holistic quality present in any painting—be it landscape, portrait or other—by which it could be considered accomplished artistically. Moore might be seeking this form minus the motif. His paintings do not invite consideration of metaphorical content—this remains so even though several of them include blood as a painting medium.

The concept of Significant Form, despite its apparent limitations, is certainly a more inclusive theory than much of what was put forth then by critics (or indeed is put forth now) as conducive to the understanding of painting. If Moore has found Significant Form, it probably would not be recognizable as such to Bell or Fry. Nor would it have passed muster with the scions of Moore’s formative years in New York in the ’70s when any suggestion of deep space in a painting was akin to heresy. While his paintings’ formal rigor might derive from the critical dialogue of those years, that is where the affinity ends. Moore has found surfaces of which they couldn’t conceive, some of which evoke a photographic emulsion. His work has an open-ended quality and a delight in happy accident that link as easily to postmodernism’s hybrid practices as to the past.