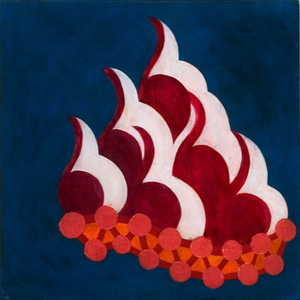 Chuck Webster’s most recent thicket of images triggers a response from somewhere between the senses, a place where the eye’s ear is activated through optically tympanic vibrations. It’s a visual sound that can be likened to prisms of light blown into clay resonators or sung through spider’s-egg membranes, cultivating two kinds of acuity—one deep and raspy, the other high, round and liquid. They are two different harmonic bearings traveling in tandem yet integrally connected and so remaining in organic unity.

Webster was invited to create a series of works based on Old Master paintings, sculpture and architectural adornments, ranging from Botticelli to Goya, in the collection of the Salander-O’Reilly Galleries. The ten paintings Webster produced were displayed on the third floor, away from the galleries’ collection, but there was a booklet available showing the Old Master works that inspired each of Webster’s paintings. This guide served as a mute docent, at times citing the exact detail of a particular masterwork in relation to Webster’s painting, at others simply supplying a visual comparison. This may seem like an off-putting experience. It implies a closure to the open trajectories of meaning Webster’s pictures usually occupy, reducing them to a 1:1 ratio of association. Surprisingly, a very different effect was achieved.

Presenting abstraction in such a structured environment serves as a study of what is possible in the larger scheme of the medium, an imaginary magnifying glass of sorts. This physical and mental distance between the old artworks and the new allows a breadth of mental space that opens the memory to the visual echoes of what we’ve witnessed. The specificity of this dialogue, between object and experience, channels the present through the past into a kind of trance—an autonomic visual ululation. Once inside this state it becomes less and less viable to separate details from the whole. It is not a fracturing but a telescoping of surface image to internal image and then outward to the overall structuring image.

Webster’s “Galleon” (2007), for example, is related to Francisco Pacheco’s seventeenth-century “Ecce Homo.” Pacheco’s work depicts Christ bound and crowned with thorns before Pontius Pilate, who lingers over his left shoulder while a mute soldier in a bulging twist of a metallic helmet pulls away Christ’s garments. The entire work has a rolling, liquid quality, from the tumbling arrangement of figures to the almost comically bulbous muscles of Christ and the lofty radiance surrounding his crown of thorns. Webster’s translation of this scene manifests itself into a bundle of swollen red and white protuberances collared at their base by a swooping band of interlocking spheres and diagonal lines. This mass hovers in an undulating blue ground that has been rubbed and polished to a waxy sheen. An image of glottal articulation translated through silent action, low and thick. It’s a manipulated projection of formal relationships, a deliberate re-imaging of a scene whose status has diminished through the centuries from the ubiquitous to the arcane. Meaning assumes a mercurial sheen. Its form will shift with each application of cultural, social, or philosophical pressure, and Webster’s transmutation is a sign of the polar extremes across which it now has the ability to spread.

It spreads to even more particular places in Webster’s “To Forrest Bess” (2007), a small whitish ground holding a yellowed, symmetrical cruciform shape whose appendages swell into eight bulging knobs. The furthermost horizontal ones glow a dull fawn-orange. The appearance of the entire shape seems to lie precariously between ovaries and testicles. The motif stems from an ornamental detail on the frame of a painting by Orazio Gentileschi titled “Christ at the Column.” It’s a dense and thick decorative frame, and the detail in question sits at the bottom center. The painting itself is of a languid, erotic Christ whose translucent skin reveals the intertwined bluish veins coursing through his body. Ancient memories of the hermaphrodite as the most exalted human form seep in from behind the eyelids.

To view one half of these pairings (Webster’s or Old Master’s) is to conjure the other. Webster uses this to great effect by creating mental palimpsests within the confines of his very specific project, functioning as a superimposed simultaneity of recognition. There are no Rosetta stones to be found here; any attempt to search for them is futile because there are no answers to be had. There is, however, a place to experience the sounds, the colors, the pitches, a place where they move together all at once in constant vibration.

Whatever else Webster’s devotional pictures may be, they are undoubtedly pictures of love. A love wrought from meditation that expands outward from the individual to an intuitive vastness, reaching that place within the caverns between our highly specialized senses. It brings to mind new approaches to understanding perception—that seeing is not a purely visual experience, but one in which the mind and body react simultaneously with both learned and instinctual responses. It’s where seeing isn’t really believing, but where it becomes a function of a more essential, unseen harmony.

Alec Soth: A Pound of Pictures

A Response to Christina Wilkinson

Thank you for taking the time and care to write such a detailed response to my article about Mr. Westergaard. Historical accuracy is of the utmost importance to me, and I value your perspective as a local historian.