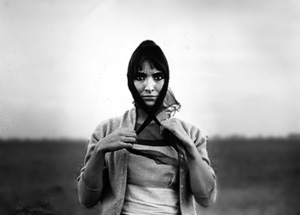 I look in the dictionary for the etymology of the word ‘stare,’ and am directed to “See stareblind” (‘stare’ having apparently originated there). The term is given to the particular fixity of gaze that sometimes results from a type of blindness, one that bears no apparent lesions or physical irregularities. It is the strangely rigid focus in certain eyes—eyes that are just like others, save for the fact that they cannot see.

To say that Chris Marker’s show, currently filling the walls at both the Chelsea and Soho spaces of the Peter Blum gallery, is an exhibition of photographs is to omit the more complicated but no less omnipresent element of the production: the voice that accompanies the images—a voice that hangs hauntingly on the walls in the form of little white letters of stickered text. As is the case in so many of Marker’s films, although he is nowhere to be seen, his presence is felt everywhere: in the voice and in the very absence of his actual image. This absence presses in on the images that do hang on the walls and urges us to wonder what was not pictured, what was not taken, the moment that was not captured in the images that lie before us. To gaze out on to the sea of photographs hanging in the Chelsea space—countless different faces, moments in time, remnants of political history—is to have the sense not so much that one is looking at a chronicle of time passed, but rather at a single, current self-portrait of a man who does not like to let himself be seen. 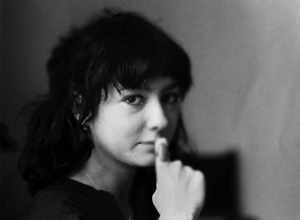 Far from countering such a take as errancy or contradiction, Marker himself provides the clues to consider the photographs this way. The first image in the “I Stare 1” series (the most overtly political of the exhibition’s four chapters) pictures a group of people standing on a balcony at the edge of a boulevard: Paris, 1962. What captures the gaze, however, is not the various faces in the photograph—each one frozen into an expression of concentration, quietude or sorrow—but is instead the strangely gaping branches of a small tree, reaching out its spindly arms over the tops of their heads. The tree’s branches are hung with a garish string of lights that serves only to accentuate its skinny form rather than mask or transform it. Somehow, it is captivating—inexplicable. We are already watching it, having a hard time proceeding to the following image, when we arrive at the wall text that directs us to “Watch the tree…Forget the faces for a moment, just watch the tree.”

Seventy-five photographs later, Marker’s wall text reflects on a return trip he made to just this spot, before the same tree in Paris. He takes another picture. This time, the tree has filled and grown and its branches are thick and dark. A young couple stands before it, holding each others’ hands, full of the promise of life that is still yet to come. Marker’s text tells us that he has returned to the same tree after traveling through the world and through time and all the events that make time up, to come to this same spot again at the Place de la République. “I manage to frame again the top portion of my old photograph,” he tells us. “In between I have been in Japan, Korea, Bolivia, Chile. I have filmed students in Guinea-Bissau, medics in Kosovo, Bosnian refugees, Brazilian activists, animals everywhere. I covered the first free elections in East Germany…and sniffed the first moments of perestroika in Moscow…In the middle, on the balcony, the tree has grown, just a little.” There is a space here on the wall, a small field of gray between the captions. And then, Marker’s voice again: “Within these few inches, forty years of my life.”

His text is at once a reflection, an observation, and also, in its own way, a kind of warning—both to us and to himself. It is as if to say, despite the flurry of theories that tend to identify photographs as “still images:” Do not be fooled, there is no stillness here. Or rather, reminding us that the stillness we do see does nothing against the movements of time. These images that are Marker’s own particular pluckings from what must be the vastness of his archive—all arranged and hung, just so, upon these walls—they do nothing against the passage of his own time. In the single blink of an eye, one moves from the 1962 photograph of the tree to the version taken in 2002, and forty years have gone by for the man who is always missing.

LITIA PERTA is a writer and teacher living in Los Angeles and teaching at the University of California, Irvine. She is interested in transformation, and in collaborating with others to develop innovative ways (pedagogical, linguistic, theoretical, economic, spiritual, poetic) to support the transformations we came here to live through.

Zalopany is a master of pastel drawing, an artform usually associated with French masters like Jean-Baptiste Siméon Chardin, Edgar Degas, and the American Mary Cassatt. While many artists work from photographic and archival material, the artist’s images of native Hawaiians resonate because they are part of a personal journey to recover a culture destroyed by missionaries and colonial exploitation.