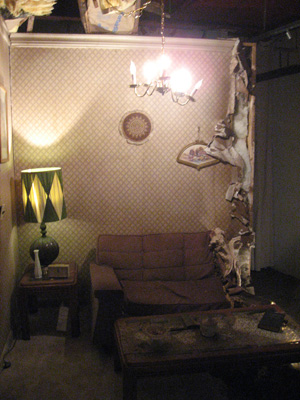 For those who oppose the Iraq War, its unfolding tragedy has colonized a repository of dark motivations and actions that represent the nadir of American ideals, a shadow realm of places like Abu Ghraib, Guantánamo and Manhattan’s Pier 57 (used to house RNC 2004 protesters) that scares the shit out of us.

Blind Spot, Andrew Ohanesian and Tescia Seufferlein’s recent show at the English Kills Gallery in Bushwick, captures some of that macabre reality and projects it onto our sense of home and safety.

It is composed of two distinct, if somewhat interrelated, pieces. One, “30-year fixed” (2007), is comprised of a house facade, stuccoed hallway, and living room surrounded by other “homey” debris—bathroom fixtures, cabinets, knickknacks and books; the other, “Patricia” (2007), by Seufferlain alone, is a half-incinerated taffeta dress that rotates every eight minutes via a motor built into its base.

Originally conceived for the Bushwick Open Studios in June 2007, “30-year fixed” was first mounted in the pair’s Grattan Street warehouse studio. Smaller than its current incarnation, the June version of “30-year fixed” concentrated on the hallway and living room. Walking past their open studio door, I remember thinking how out of place this slice a lower middle-class Americana seems in the industrial spaces of Bushwick. Only a hole punctured in the hallway wall interrupted the pristine scene, and assured me that I wasn’t inadvertently walking into a neighbor’s apartment.

As you walked further into the installation, the home literally disintegrated. It felt as if something inhumane and perhaps supernatural had befallen an otherwise lovingly arranged home. Walls were lopped off the central living room space as if by the hand of some angry god. Nowhere could you stand back safely and get a view of the breadth of destruction.

In this newer, expanded version, the artists abandoned the hallway as the primary artery for viewers entering the work in favor of a longer view that reveals the home’s facade.

An electrical wire, with the ubiquitous hanging sneakers, greets you from above as you enter the gallery. The house number, 3742 (the last digit is missing, leaving a ghostly impression), is a reminder of the growing tally of American dead in the Iraq War.

The home interior is raised off the ground and a slope of dirt and debris separate the hallway from the gallery floor. Around one corner, a shower drips endlessly into a bathtub, suggesting various water torture techniques we once only associated with totalitarian regimes. Wood beams jut out from the floor and a toilet is shattered. Around the other corner, dirt seems to crawl up bookcases and cabinets, and on the floor a smashed fan musters the effort to turn occasionally.

Behind the far wall, a gold star flag lies in the dirt, signifying that a soldier, presumably the child of those who lived here, has died in the war. There is a solitary letter on a small table in the home’s front entrance addressed to someone c/o the US Marine Corp.

The installation gives the impression that a singular catastrophic event, like a car bomb or tornado, and not successive acts of devastation, are responsible for the ruin. The faces of family members emerge out of photographs sitting on a coffee table at the center of the scene.

Visually, “30-year fixed” conflates two classic mid-century American cinematic genres: science fiction and film noir. The fantastically supernatural sensation emitted by the installation refers to the former, while the visual evidence—such as the gold star flag, the letter and the house number—suggests an ambiguous crime scene and hence the latter. The narrative is never straightforward, and only scattered clues allude to the underlying context, but even without these clues the emotions of loss and terror are clear.

“Patricia” is the other half of the Blind Spot show, but unlike “30-year fixed” it doesn’t compel you to delve deeper. The taffeta dress appears emotionally remote and I can only venture to guess that it refers to the loss of innocence.

“Blind Spot” according to its artists’ statement “reflects the faceless suffering of others and how close to that precipice we ride on a daily basis in our own lives.” I think it does more than that; it shows us how events like war change each and every one of us. Sometimes pain from disaster takes generations to heal, but only when it is accompanied by honesty and not shrouded by fictions. “30-year fixed” takes one of the central tragic realities of war—that the war dead leave families behind with nothing but memories—and visualizes the pain each of those homes must confront.

Entering “30-year fixed,” your assumptions about its seemingly solid construction quickly deteriorate as you realize it is all surface illusion—lies that don’t hold up to examination. Like the European colonial powers who realized that the issues inherent in colonialism, like power hierarchies, weren’t easily tucked away when they left their colonies, Americans are seeing that the quagmire that is Iraq has already followed them home. Like the letter in the foyer, there is no place left for it to go since it will inevitably be marked “return to sender.”

Six From My Daily Actions, or The Meteorites

S. Brook Corfman is the author, most recently, of My Daily Actions, or The Meteorites (chosen by Cathy Park Hong for the Fordham POL Prize), and the chaplet Frames (Belladonna* Books). Richard Siken chose their first book, Luxury, Blue Lace, for the Autumn House Rising Writer Prize. @sbrookcorfman & sbrookcorfman.com

If Blind Spot, Teju Cole’s most recent book, is an extension of his work on Instagram, it is only because he uses social media towards that rare and admirable thing: not as a tool for marketing himself, but as a platform for experimentation.

It’s hard to feel alone in Hours and Places, as Constance DeJong’s voice echoes from more than one place in Bureau’s two rooms.