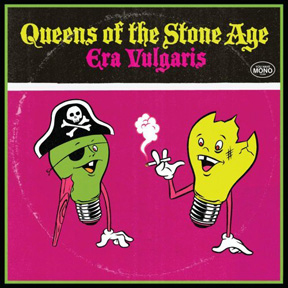 Less than ten years since the release of their self-titled debut album, Queens of the Stone Age have presented us with LP number five. Aside from being easily the finest rock album so far this year, Era Vulgaris is further evidence that QOTSA mastermind Joshua Homme’s body of work has to be recognized for its gritty brilliance and elevated to its rightful place among the vanguard of rock music. Since the awful demise of Nirvana and the dissolution of Jane’s Addiction nobody has compiled a more explosively dynamic collection of hard rock records than Queens of the Stone Age.

Hearing Era Vulgaris blast out of your headphones with its slyly aggressive yet well-coiled energy, it becomes clear that Homme’s mixture of punk, metal, grunge, and pop now deserves to be mentioned in the same breath as Nirvana, Jane’s Addiction, Alice in Chains, Black Sabbath and—yes, people of Valhalla—even Led Zeppelin. The gulf between Homme and any would-be rival guitar heroes continues to widen. For a broad-shouldered, 6’5” redhead, Homme has a remarkably deft touch with his picking and fills, and when he puts that physical strength behind a power chord or a soaring, expanding solo its impact is felt. He can out-race the punks anytime and play classic epic rock with the best. He can seamlessly move between acoustic, blistering up-tempo, and slow, spacy thunder-rock styles. His deceptively clever vocal work imbues the band’s overall sound with an emotional resonance and mystery that most of their peers sorely lack.

At first glance, Era Vulgaris—its cover featuring a half-broken, chain-smoking cartoon lightbulb named Bulby, and another lightbulb dressed as a pirate with a wooden leg—appears to be a children’s record created by a disturbed individual. The Gatorade-green, bubblegum-pink, and police line–yellow color combination, more reminiscent of eighties punks Black Flag and Dead Kennedys than contemporaries like Tool, offers no hint of the power of the music contained within. The QOTSA website features regular animated updates from Bulby that make a mockery of traditional music industry promotion. And in the ultimate anti-marketing joke, the band spent the early weeks of their recent tour hitting neglected towns like Duluth, Bakersfield, and Eugene instead of starting in L.A. or New York.

But Era Vulgaris is serious. That’s not to say that some of the lyrics aren’t satirical or peppered with non-sequiturs, but the way that Homme’s latest lineup makes noise here is a stinging retort to those who would claim that rock ’n’ roll is dead or dying in the laptop age. Beyond the group’s buzzing, hook-laden core, the music has industrial accents that may have rubbed off from Homme’s touring with Nine Inch Nails in 2005. There are also Gary Numan–esque keyboards and hints of Low-era David Bowie. â€¨Homme’s occasionally angelic, falsetto vocals can create a portentous mood when contrasted with the pounding drums and slashing guitar parts, but the songs always swing upwards in the end.

From the infectious opener, the mid-tempo, off-time grinding dirge “Turning on the Screw,” to the frantically ominous “Run Pig Run,” this is a record that doesn’t miss a moment or a chance to deliver something special. Everything is tough and economical and heavy, yet fleet of foot. “3’s & 7’s” is about hiding from reality:

Lie, lie to my face

Tell me it ain’t no thing

That’s what I wanna hear

Take your lie to the grave

That’s what an old friend told me

Look what it did for him

“I’m Designer” is a slap at the record industry and those who would kowtow to it, which comes as no surprise from someone who has suggested on the band’s website that when their current deal is up he plans to take a tighter reign on their output:

You’ve made an offer that I can refuse

’Cause either way I get screwed

Counter proposal: I go home and jerk off…

It’s truly a lie—I counterfeit myself

You can’t own what none can buy

You don’t own—neither do I

With its teasing, flippant vocals, “I’m Designer” seems to be a social critique and a seduction song at the same time.

Since the release of their self-titled 1998 debut, following Homme’s stint as a touring guitarist for the Screaming Trees and a career as guitarist for the sludgy metal group Kyuss, QOTSA has been the mad laboratory for Homme’s music. Despite releasing five albums and touring extensively for nearly a decade, QOTSA are a band only in the sense that Nine Inch Nails or Prince and the Revolution are. As with Trent Reznor or Prince, it’s one man’s unique musical vision as realized by a revolving cast of (very distinguished) players. Homme directs the action while leaving room for them to do their thing within his framework.

Between QOTSA, his side project Desert Sessions, and his mentorship of Eagles of Death Metal, Homme has played and recorded with a who’s-who of highly creative musicians: Dave Grohl, Mark Lanegan, Nick Oliveri, Dean Ween, PJ Harvey, Chris Goss, Trent Reznor, Billy Gibbons, Julian Casablancas, Matt Cameron, and Twiggy Ramirez, to name a few. On his penchant for collaboration, Homme told Ultimate Guitar, “Long ago I lost the opportunity to be in U2 —where it’s the same four guys. I respect that, but at the same time this is the search to try and take advantage of playing with certain people, even if they can’t stay, and then there’s other times you need to humble yourself at the alter of music and if you don’t…” He then made a throat-cutting gesture.

When you listen to Desert Sessions recordings, you hear novelty songs in among the tunes that serve as blueprints for future QOTSA songs and the proving ground for Homme’s guitar and vocal exploration. These musical outings take place over days and weeks somewhere outside of Palm Desert and allegedly began in 1997 as a magic mushroom trip that morphed into a three-day jam. The results so impressed Homme that it became a regular “off-season” gig between QOTSA albums and tours. He has referred to it as “the world’s longest running mix-tape.”

Dave Grohl took time off from his own band Foo Fighters to record all the drums on the third QOTSA record, Songs For The Deaf, and even tour it for a while. Why would the world’s greatest living rock drummer, one with a legacy of his own, volunteer to be a drummer again in somebody else’s band? It’s likely because he digs the same quirky, aggressive but melodic rock that QOTSA delivers and knew that he’d get to open up and hit the skins hard without the pressures of being the group’s frontman. There were whispers around the recording of Nirvana’s unplugged record that Grohl was becoming restless and was eager to get back to his aggressive brand of drumming. He had no such trouble with QOTSA. In other words, it was a chance to push the boundaries of his ability with other top players and have a little fun in the process. The result was Songs for the Deaf, an album that exploded on the scene in 2002. Grohl’s intro to the tune “Songs for the Dead” on that record might just be the most explosive drum intro ever recorded outside of the extreme metal world. With the buzzing, dry guitar scrapes that accompany those drums you have a song that could incite a riot given the right circumstances.

No matter what direction Homme has taken the band in, a rock-solid rhythm section has remained a given. A drummer for QOTSA has to go from slamming punk rhythms (like “Sick Sick Sick”) to the off-kilter beats (“I’m Designer”) that give the sound its unpredictability. The bass is vital for setting that deep, dark tone that even the more upbeat tunes have at the bottom. On the band’s last two albums Homme has played a lot of the bass himself and so he has had a considerable hand in both the high and low ends of the sound spectrum.

It’s his prodigious guitar-playing that truly separates Homme from the pack, however. He is in utter control of his sound and, with his bottomless well of cool riffs, it’s easy to forget it’s the same guy from moment to moment and song to song. He can lie back in a driving rhythm pattern that saws away at the atmosphere in line with the drums and bass, but when you listen closely you start to notice the fascinating fills and lead runs that thread their way through the mix. His lead solos have a ringing fullness to them that makes you want to follow them into the darkness. He is the punk guitarist that metal heads can appreciate and the metal guitarist that a punk can love. It is that very balance that is the core of his magnificent work with Queens of the Stone Age.

In breadth and skill, insight and innovation, Dear Miss Metropolitan takes its place alongside Roberto Bolaño’s 2666 among the most profound works of literature to have emerged from crimes so horrific they became international sensations. Years in the making, emerging from a mind transformed by decades in a chrysalis, the book leaves one heaving a glorious sigh, feeling that it was well worth the wait, and harboring a secret hope that the next cocoon will crack more quickly.

In the book Thinking: The Ruin (2010) the contemporary Lebanese writer Jalal Toufic offers a paradoxical definition of ruins as “places haunted by the living who inhabit them.” It is through this notion of ruins that he approaches his own city, Beirut, and the trauma of civil war.