A century since its inception along the Rio de la Plata, tango has lost none of its power, with fresh incursions into big-screen (and small-screen) romance, the club scene, and, with most telling intensity, jazz. Tango’s grace and supple bandoneons got their start just as the movie and record industries were taking shape, and they’ve been working closely together ever since. Witness J. Lo taking Richard Gere for a turn, while in Assassination Tango it was reportedly Robert Duvall who introduced his Argentine lady to the dance, thus demonstrating how far tango has spread from home.

Pairing fiery elegance with emotional distance, tango thrives worldwide. “In Berlin, you can dance it seven nights without repeating venues,” said Nicolas Entel, whose documentary on the neo-trad Orquesta Típica Fernández Fierro screened in May at Tribeca Cinemas after its subjects’ two-night debut to shouting houses at Joe’s Pub. OTFF has made what’s old new on Buenos Aires’ live scene, where August’s World Tango Championships displayed ample evidence of what’s termed the vertical expression of a horizontal desire. Electro-tango fills nightclubs there and spices the Nip/Tuck soundtrack; prime exponents include Carlos Libedinsky—whose Narcotango CD cleaves too near its name, dangling the bandoneon amid languorous samples and beats—and Paris-based Gotan Project, who toured Europe last spring. 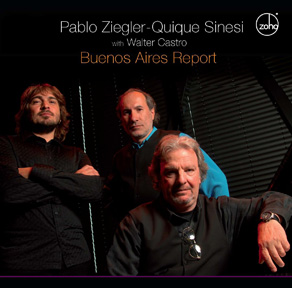 Canny delicatesse and vigor infuse two esteemed tangueros, pianist Pablo Ziegler and bassist Pablo Aslan, as they transpose transnational exchanges formulated a century back near the wharves of Buenos Aires and Montevideo. One strand of music’s DNA bears tradition; the creative helix is fusion. As Yale enthnomusicologist Robert Farris Thompson wrote in an email interview, “Tango was forever creole, therefore always welcoming to influences and fusions—check out the beat behind the first song in this summer’s hit film, Hairspray: It’s the old habanera, root of the tango, brought alive today as the pulse of reggaeton.” (Thompson and his Tango: The Art History of Love were profiled in the Rail, October 2006.)

Stealthy percussion percolates on Ziegler’s live Buenos Aires Report (out on Zoho in October), as knuckles thrum instruments on the title track and “Places,” with another Ziegler tune, “Elegante Canyenguito,” suggesting the dance’s early manifestation from Congo roots. “I started with this trio some years ago,” said Ziegler, who played in nuevo tango master Astor Piazzolla’s amazing final quintet, “when one of my former guitar players, Quique Sinesi, moved to Berlin and invited me to play with him there—then we began adding the bandoneon. [Their Bajo Cero took a 2005 Latin Grammy.] We’re improvisers, where tango players traditionally just play the notes. In 1978, when Piazzolla returned to Buenos Aires from Europe, he reformed the quintet and called me. It was during the jazz-rock explosion—Return to Forever, Mahavishnu Orchestra—and I was playing in that style. That’s what Astor was looking for: different players for a new sound. What was interesting about that quintet was that I began to improvise [in the tango context].” Ziegler’s quartet plays his annual Jazz Standard gig in November, and themes will loft and fragment among piano, guitar, bandoneon, and bass, in an impressive reorganization of jazz-combo energy. 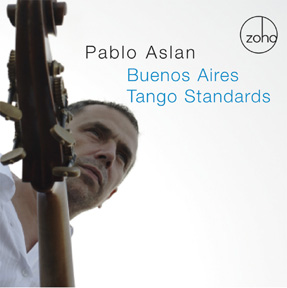 Using a term that signifies African influence, Robert Thompson says bassist Pablo Aslan is “subtly recapturing the drumming ebullience of original candombe by adding the jazz battery to tango.” On Buenos Aires Tango Standards, the bandleader incorporated the drum kit (played by Daniel Piazzolla, a grandson of maestro Astor), dispensed with bandoneon, and alienated arbiters of taste, with the Grammy committee excluding Tango Standards from the tango category. “For a lot of people,” Aslan said in a phone interview, “tango is a very defined, specific thing—but for a lot of us, it’s not.” Since his epiphany hearing bandoneon master Dino Saluzzi duet with jazz bassist Charlie Haden, Aslan’s sought “a looseness of playing, of spontaneity and improvisation.” And after experimenting with drummers for a decade, while in Buenos Aires he “ran into Pipi [Piazzolla], who had the right ears for it.” The band’s book cleaves to tango’s mid-century core, with sax and trumpet phrasing planted firmly in the bop tradition. Yet intrigue follows Aslan’s gliding contrabass, sliding tango’s arrestres to key the spare drums and Abel Rogantini’s piano, binding the rhythm section in darker, more lithe timbres than the Sahelian blues pulse of jazz. Riffing with loose glamor, Tango Standards slides from the casual workout “Loca Bohemia” to the heady brew of tango master Horacio Salgán’s “Don Augustin Bardi.”

New York has long functioned as a tango fulcrum, with this year’s Mostly Mozart Festival choosing as its first composer-in-residence the ubiquitous Argentine Osvaldo Golijov, who’s declared Piazzolla the primary influence for his orchestral amalgamations. Piazzolla spent early years on East Ninth Street as chums with Jake LaMotta (the boxer portrayed in Martin Scorsese’s Raging Bull), and his sense of modernity would outrage tango traditionalists. A supreme instrumentalist, he mated his bandoneon with the Kronos Quartet’s strings on one somber late disc, and after his death in 1992 the classical world binged on his tangos: Yo-Yo Ma, violinist Gidon Kremer, and piano virtuoso Emmanuel Ax, who teamed with Pablo Ziegler for a Sony tribute—they fit their concert grands stem-to-stern on the Knitting Factory’s stage for a recital which Ax declared to be his first without a tux.

Guilllermo Klein’s Composers Close Up in February at Merkin Hall included a Steve Reich exploration on dual pianos with Jorge Rossy, the drummer in Brad Mehldau’s acclaimed piano trio. Legendary bandoneonists Dino Saluzzi and Daniel Binelli came through town; in April, Saluzzi appeared with cellist Anja Lechner at Merkin supporting their new duo CD, Ojos Negros—more free-flowing than tango, more elusive than chamber music. Saluzzi experiments with his own family from the north of Argentina, and with Lechner’s Rosamunde Quartet, on another ECM disc, Kultrum. Binelli had been in the Osvaldo Pugliese’s powerhouse orquesta, got the nod from Piazzolla late in the latter’s fabled career, and played Carnegie Hall in 2001 with his compatriot, titanic concert pianist Martha Argerich. (This writer caught Binelli’s Miles Davis tribute that year in Buenos Aires.) In February he joined pianist Gustavo Moretto’s quintet at Cornelia Street Café, and in June he played the Bronx River Arts Center with composer Laura Andel’s ensemble, which included downtown avant-guitarist Elliott Sharp, who coproduced Andel’s SomnabulisT (Red Toucan).

Binelli’s intro on Andel’s Doble Mano was riveting and brutal, revealing within moments how tango tinges beauty with cruelty. Andel had premiered the evening-length work at the Kitchen with Uruguayan bandoneonist Raul Jaurena (whose Soundbrush release, Te amo tango, features originals with piano and string quintet). Vividly atmospheric, Doble Mano functions as an emotional scenography (a terrain implied by titles such as Salgán’s Buenos Aires at Three in the Morning and Piazzolla’s Tango: Zero Hour). Andel, however, only suggests tango; gamelan and motoric minimalism course just as readily through her work. “Improvisation is when you really hear the player’s background,” she said of her expert ensemble. “I wanted the bandoneon players to embellish the work with their own language, as well as sections where the gamelan was on top with the bass doing the arco phrasing typical of tango.”

Another powerful Binelli appearance sparks Nicholas Entel’s documentary Orquesta Típica. Having trundled their piano to La Boca, Buenos Aires’ inner port, and shambled through a European tour at their fans’ behest, the band graduates to the studio to record commissioned works. Enter Binelli, coaxing a mournful passage and then commanding that a thrilling Ã¢â¬Â¨up-tempo structure be signaled with a sweeping arrestre from the bass, wrenching his bellows all the while with transfixing musical arrogance. In motley T-shirts for their New York debut at Joe’s Pub in May, OTFF played a blistering set. (Entel said they were first to dress “like normal people,” distinguishing that “normal was once suits and lots of hair product, because in the 1940s you dressed that way to buy bread on Sunday morning.”) A four-violin backline set dynamic counterpoints for four billowing bandoneons; the bassist, in Entel’s film, says of the bandleader with the golden age’s biggest beat, “I like [Juan] D’Arienzo because he sounds like the Ramones.”

“When I was in high school,” Entel said, “no one was into tango.” Now OTFF has spawned an upswell of young orquestas; Entel felt they’d also influenced El Arranque, who played Lincoln Center in 2001 with Wynton Marsalis. In December 2006, across Avenida Libertador from stadiums where the national polo championships were being contested, El Arrenque played tangos Carlos Gardel would have sung, for Banco Supervielle’s private festivities. Dance teams cut across the stage with expressions between full concentration and utter indifference; the crowd responded with polite enthusiasm, then returned to a luscious banquet and deals. Ziegler and Aslan’s fusions, in comparison, like the hunger of OTFF, are a huge turn-on.