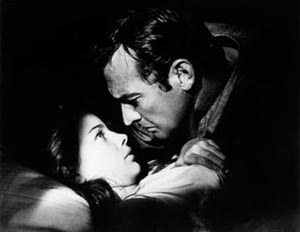 In the prologue to Un Chien Andalou, Luis Buñuel’s 1928 collaboration with Salvador Dali, a character played by Buñuel cuts lead actress Simonne Mareuil’s eye open with a straight razor. The eye in fact belonged to a dead calf. Either way, a director cutting an eye—as he might cut a strip of celluloid—at the start of his own film encourages a few interpretations. When questioned about the film’s symbolism, Buñuel declared, “Nothing symbolizes anything.” He’d once dreamt about a thin cloud slicing the moon in half like an eye, and found it a sufficiently irrational image to precede his irrational film. Un Chien resulted from Buñuel and Dali free-associating images that surprised them, and eliminating anything with symbolic significance. Buñuel thought people who praised the film for its “beauty” missed the point. To him the film was a call to murder. Such was Buñuel’s faith in the mysteries of Surrealism. It enabled him to remain an atheist all his life, for which, in a typical paradox, he thanked God.

Two late-career Buñuel films, shot during his period of exile in Mexico, are now available on DVD: The Young One (1960) through Lionsgate, and The Milky Way (1969) through Criterion. Though formally quite different, they show Buñuel’s affinity for the grey areas between innocence and sin, and his distaste for the easily psychoanalyzable. He was most at home with what he called “the fundamental ambiguity of all things.” His refusal to take a stance was unnerving, and often infuriating, to viewers and critics.

By the time Buñuel made The Young One, he’d been a Mexican citizen for ten years and in exile from Spain for twenty-four. Despite two years of unemployment in Hollywood in the mid-Forties, Buñuel was on the verge of gaining US citizenship when producer Oscar Dancigers suggested he make a film in Mexico. The ease of obtaining a visa, and a growing community of Spanish expatriates and blacklisted Americans, made Mexico an attractive option. The Young One, filmed in Acapulco and Mexico City, is one of twenty films Buñuel directed south of the border. He considered it an “American” film, alongside 1952’s Robinson Crusoe, in that it was filmed in English and involved mostly American actors. Its unpopular take on race and sexual relations resulted in rejection on both American and European soil.

Sidney Poitier was appearing in films like The Defiant Ones (1958) and Lillies of the Field (1963) around this time, challenging racial stereotypes through a series of Christ-like characters often paired off against bigoted whites. The Young One involves a similar scenario: a hip, black clarinet player named Travers (Bernie Hamilton) arrives on an island hunting preserve owned by a redneck named Happy (Zachary Scott). Travers is fleeing the bogus charge of raping a white woman. Happy recently inherited the custody of a wildy naive and newly pubescent girl, Evvie (Key Meersman), whose only convincing emotion is the fear of being molested. Any resemblances to early Poitier films end here. If Sidney were accused of raping a white woman in a film, he would not place his jacket over a thirteen-year-old white girl’s shoulders to quell his lust for her, as does Travers. Nor would Happy be swayed into raping Evvie by the aphrodisiac tune of Travers late-night clarinet. Buñuel even gives Happy (the racist pedophiliac who complains to Travers “I just can’t see you as a human being!”) a fair shake. Happy offers room and board to the black man, and eventually inspires his trust.

Buñuel admits the film failed for its anti-Manichean viewpoint; that is, its dismissal of a clear duality between light and darkness, good and evil. A Harlem newspaper reviewer wrote that Señor Buñuel should be hung, upside down, from a streetlight on 5th Ave. (In typical form, Buñuel later dreamed of declaring himself a staunch Manichean.) To further the point, a pastor shows up late in the film to baptize Evvie and put a lid on both guys’ instinctive and sexual drives. “Preserve me at all costs from nature and her adverse moods!” says the man of God, arriving in a rainstorm.

In 1969 Buñuel was still living in Mexico, but traveled to Spain and France to film The Milky Way, his exhaustive two-hour assault on the hypocrisies of Catholic dogma. He wrote the screenplay with Jean-Claude Carriére, his close friend and collaborator on six scripts, including Belle du Jour and The Discreet Charm of the Bourgeoisie. Carriére helped to compose much of Buñuel’s autobiography, My Last Sigh, and appears in The Milky Way as the head of a group of Priscillians—people who believed that to destroy evil and liberate the soul, the body must be unceasingly exposed to pleasures of the flesh.

The movie unfolds like the dream of a brilliant though heavily indoctrinated priest on the eve of his giving up the cloth. Which is to say The Milky Way is an intense, surreal cinematic collage of six great Christian themes: the Eucharist; the origin of evil; the dual nature of Christ as word and man; the Holy Trinity; the conflict of Christian virtue and freedom; and the Virgin Mary’s virginity. It follows the pilgrimage of two tramps (Paul Frankeur and Laurent Terzieff) to Santiago de Compostela, Spain, jumping back and forth in time between Biblical scenes and modern intellectual discussions. The first scene drops us in the midst of a conversation between a policeman and a cleric in a cafe. “You must take the word of Christ literally,” demands the cleric. The policeman responds: “Sorry, but it just doesn’t make any sense to me.” “All the more reason to believe!” says the cleric. “Religion without mystery is no religion at all.” Moments later, personnel from a psychiatric clinic come to collect the cleric in a van.

Buñuel was raised a Catholic in what he considered the medieval gestalt of Calanda, Spain. He was enamored of the mysteries inherent in religious belief, but eventually rejected religion because it compromised his moral freedom. He claims to have forfeited the potential illumination of Christianity for what Andre Breton termed the “profane illuminations” of Surrealism, which put no restrictions on his imagination. In essence, The Milky Way portrays the Christian belief Buñuel abandoned using techniques of the art form that took its place. A representative sequence begins with a woodland orgy of Priscillians. Buñuel intercuts to a maitre d’hotel explaining the dual nature of Christ, then to Canaan’s wedding where a decidedly lackluster Jesus (think Eric Stolz in Pulp Fiction) indifferently turns water into wine, then to an anarchist firing squad shooting the pope, then to a peaceful charity ceremony of children robotically reciting Christian doctrine. A bewildered man in the audience asks one of the pilgrims, “Was that a firing squad I just heard?” The pilgrim calmly replies, “Oh, no, that was just my imagination.”

The film was a success, although it elicited serious and contradictory criticism. Julio Cortazar felt the Vatican must have funded it. Carlos Fuentes interpreted it as an antireligious war flick. Buñuel was, of course, indifferent to such reactions. To him the movie wasn’t for or against anything. One of its ideologically frustrated characters whines: “The fact that science and technology fill me with contempt can’t help but force me to believe in God.” Buñuel saw another way out. A person can always choose, as he wrote, “to simply live in the mystery.”

Having attended the School of the Art Institute of Chicago, Ferrari Sheppard brings his formidable intellect and passionate engagement to this series of acrylic, charcoal, and gold-leaf portraits of Black girls and women spending time together and offering themselves moments of contemplation or repose. Sheppard constructs these figures out of kinetic bursts of color, scrabbles of charcoal stick, and weeping drips of paint.